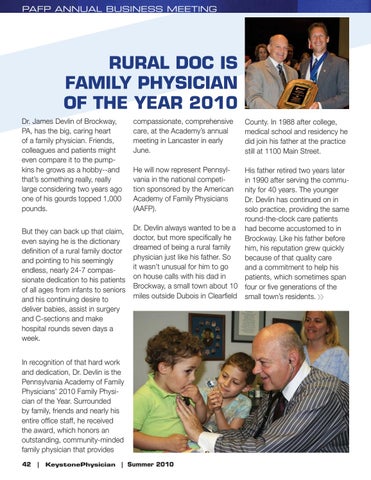 RURAL DOC IS FAMILY PHYSICIAN OF THE YEAR 2010 Dr. James Devlin of Brockway, PA, has the big, caring heart of a family physician. Friends, colleagues and patients might even compare it to the pumpkins he grows as a hobby--and that’s something really, really large considering two years ago one of his gourds topped 1,000 pounds. But they can back up that claim, even saying he is the dictionary definition of a rural family doctor and pointing to his seemingly endless, nearly 24-7 compassionate dedication to his patients of all ages from infants to seniors and his continuing desire to deliver babies, assist in surgery and C-sections and make hospital rounds seven days a week.

compassionate, comprehensive care, at the Academy’s annual meeting in Lancaster in early June. He will now represent Pennsylvania in the national competition sponsored by the American Academy of Family Physicians (AAFP).

County. In 1988 after college, medical school and residency he did join his father at the practice still at 1100 Main Street.

His father retired two years later in 1990 after serving the community for 40 years. The younger Dr. Devlin has continued on in solo practice, providing the same round-the-clock care patients Dr. Devlin always wanted to be a had become accustomed to in doctor, but more specifically he Brockway. Like his father before dreamed of being a rural family him, his reputation grew quickly physician just like his father. So because of that quality care it wasn’t unusual for him to go and a commitment to help his on house calls with his dad in patients, which sometimes span Brockway, a small town about 10 four or five generations of the miles outside Dubois in Clearfield small town’s residents.

In recognition of that hard work and dedication, Dr. Devlin is the Pennsylvania Academy of Family Physicians’ 2010 Family Physician of the Year. Surrounded by family, friends and nearly his entire office staff, he received the award, which honors an outstanding, community-minded family physician that provides 42 | KeystonePhysician | Summer 2010