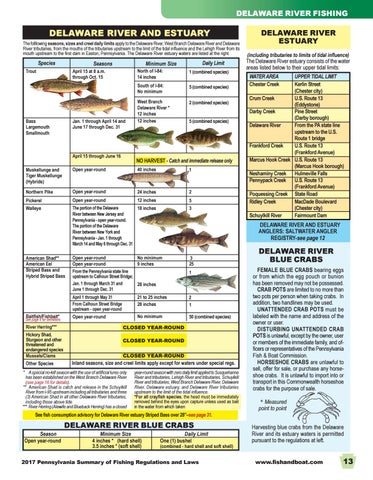 NO HARVEST - Catch and immediate release only

Inland seasons, size and creel limits apply except for waters under special regs.

* A special no-kill season with the use of artificial lures only has been established on the West Branch Delaware River (see page 16 for details). ** American Shad is catch and release in the Schuylkill River from I-95 upstream including all tributaries and three (3) American Shad in all other Delaware River tributaries, including those above tide. *** River Herring (Alewife and Blueback Herring) has a closed

(including tributaries to limits of tidal influence)

DELAWARE RIVER BLUE CRABS FEMALE BLUE CRABS bearing eggs or from which the egg pouch or bunion has been removed may not be possessed. CRAB POTS are limited to no more than two pots per person when taking crabs. In addition, two handlines may be used. UNATTENDED CRAB POTS must be labeled with the name and address of the owner or user. DISTURBING UNATTENDED CRAB POTS is unlawful, except by the owner, user or members of the immediate family, and officers or representatives of the Pennsylvania Fish & Boat Commission. HORSESHOE CRABS are unlawful to sell, offer for sale, or purchase any horseshoe crabs. It is unlawful to import into or transport in this Commonwealth horseshoe crabs for the purpose of sale. * Measured point to point Harvesting blue crabs from the Delaware River and its estuary waters is permitted pursuant to the regulations at left. www.fishandboat.com