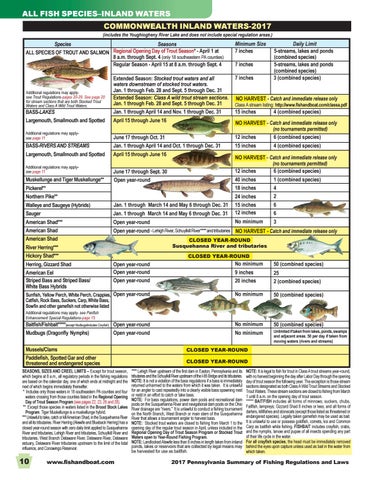 (includes the Youghiogheny River Lake and does not include special regulation areas.)

SEASONS, SIZES AND CREEL LIMITS – Except for trout season, which begins at 8 a.m., all regulatory periods in the fishing regulations are based on the calendar day, one of which ends at midnight and the next of which begins immediately thereafter. * Includes only those waters in 18 southeastern PA counties and four waters crossing from those counties listed in the Regional Opening Day of Trout Season Program (see pages 22, 23, 26 and 28). ** Except those species in waters listed in the Brood Stock Lakes Program. Tiger Muskellunge is a muskellunge hybrid. *** Unlawful to take, catch or kill American Shad, in the Susquehanna River and all its tributaries. River Herring (Alewife and Blueback Herring) has a closed year-round season with zero daily limit applied to Susquehanna River and tributaries, Lehigh River and tributaries, Schuylkill River and tributaries, West Branch Delaware River, Delaware River, Delaware estuary, Delaware River tributaries upstream to the limit of the tidal influence, and Conowingo Reservoir.

CLOSED YEAR-ROUND CLOSED YEAR-ROUND **** Lehigh River upstream of the first dam in Easton, Pennsylvania and its tributaries and the Schuylkill River upstream of the I-95 Bridge and its tributaries. NOTE: It is not a violation of the bass regulations if a bass is immediately returned unharmed to the waters from which it was taken. It is unlawful for an angler to cast repeatedly into a clearly visible bass spawning nest or redd in an effort to catch or take bass. NOTE: For bass regulations, power dam pools and recreational dam pools on the Susquehanna River and navigational dam pools on the Ohio River drainage are “rivers.” It is unlawful to conduct a fishing tournament on the North Branch, West Branch or main stem of the Susquehanna River that allows a tournament angler to harvest bass. NOTE: Stocked trout waters are closed to fishing from March 1 to the opening day of the regular trout season in April, unless included in the Regional Opening Day of Trout Season Program or Stocked Trout Waters open to Year-Round Fishing Program. NOTE: Landlocked Alewife less than 8 inches in length taken from inland ponds, lakes or reservoirs that are collected by legal means may be harvested for use as baitfish.

NOTE: It is legal to fish for trout in Class A trout streams year-round, with no harvest beginning the day after Labor Day through the opening day of trout season the following year. The exception is those stream sections designated as both Class A Wild Trout Streams and Stocked Trout Waters. These stream sections are closed to fishing from March 1 until 8 a.m. on the opening day of trout season. ***** BAITFISH includes all forms of minnows; suckers, chubs, Fallfish, lampreys; Gizzard Shad 8 inches or less; and all forms of darters, killifishes and stonecats (except those listed as threatened or endangered species). Legally taken gamefish may be used as bait. It is unlawful to use or possess goldfish, comets, koi and Common Carp as baitfish while fishing. FISHBAIT includes crayfish, crabs, and the nymphs, larvae and pupae of all insects spending any part of their life cycle in the water. For all crayfish species, the head must be immediately removed behind the eyes upon capture unless used as bait in the water from which taken.