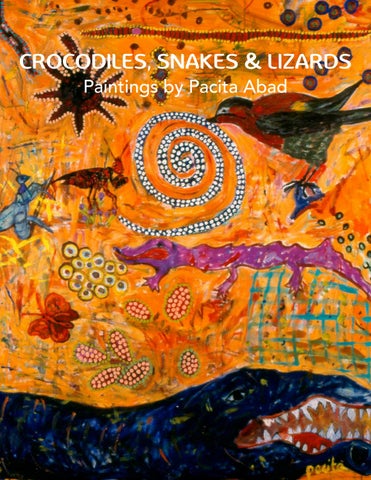 DARWIN While living in Indonesia in 1997, Pacita Abad (1946-2004) was invited by the Museum and Art Galleries of the Northern Territory (MAGNT) to participate in Australiaâ&amp;#x20AC;&amp;#x2122;s 17th National Craft Association Award Exhibition. The curated exhibition included 65 textile artists from Australia and 8 artists from Indonesia. Pacita was included among the Indonesian artists as she had been living in Jakarta since 1993. The inclusion of Indonesian artists was part of a concerted effort by Australian cultural authorities to expose Aborigine artists to contemporary Indonesian textiles. It was expected that the artists could develop a deeper understanding of Indonesiaâ&amp;#x20AC;&amp;#x2122;s rich cultural traditions and apply them to their own powerful work in Australia.

Such cross-cultural fertilization had a beneficial impact twenty years earlier when Indonesian batik making techniques were first introduced to the remote Aborigine desert outpost of Utopia. This helped spawn a major artistic movement. Utopia batik designs In the 1970s a womenâ&amp;#x20AC;&amp;#x2122;s cooperative was set up that began producing and exhibiting colorful batiks based on traditional Aboriginal designs. This also eventually lead to the introduction of canvas and acrylic paints in artist communities, and the growing international recognition of Australian Aboriginal paintings. It was because of this success, that the Australian Government began to fund annual workshop collaborations and exchanges between Aborigine and Indonesian artists. In fact, it was through a cross-cultural batik workshop

(Brahma Tirta Sari Studio Workshop for Australian Aboriginal Art Community Utopia) in Yogjakarta in 1994 conducted by her batik artist friends, Nia Fliam and Agus Ismoyo, that Pacita first met some of the Aboriginal artists from the Northern Territory community of Utopia. Left-Right: Barbara Weir, Ada Bird Petyarre, Susie Bryce, Jenny Green, Violet Petyarre, Nia Fliam, Agus Ismoyo, Hilda Pwerli, Glory Ngale, Myrtle Petyarre Much to her disappointment, Pacita was not allowed to participate in this workshop because she wasnâ&amp;#x20AC;&amp;#x2122;t an Indonesian citizen. However, the following year when the MAGNT curator, James Bennett, saw her fabric collaged, colorful hand sewn paintings in Jakarta, he invited Pacita to participate in the 1997 National Craft Awards Exhibition in Darwin.

DRAWN TO NATURE Coming from the small, remote fishing island of Batanes in the Philippines, Pacita grew up with a strong love and appreciation of the environment. When she became a painter she often was captivated by the beauty of the natural world around her during her travels. This led her to paint animals in the wild in East Africa, fish and coral in the underwater paradise of the Philippines, and colorful tropical flowers throughout Southeast Asia. As part of her â&amp;#x20AC;&amp;#x153;Friendsâ&amp;#x20AC;? series she even painted her faithful dog Thumper. Opposite: Shallow gardens of Apo Reef (detail), 1986 (132 x 137 in) Oil, acrylic, mirrors, plastic buttons, cotton yarn, rhinestones on stitched and padded canvas

Although Pacita had lived and painted in Latin America, Asia and Africa, she had never been to Australia. She was anxious to visit the country and join with the 72 Indonesian and Australian artists. Pacita was particularly excited to not only see Darwin, but also to travel and visit local artists in a number of remote communities of the Northern Territory, including the Tiwi Islands of Melville and Bathurst, Kakadu and Arnhem Land, as well as Alice Springs and Uluru. Crocodiles are hard to avoid in Australia’s Northern Territory, and Pacita first noticed them once she arrived in Darwin and went to visit the museum, which is located on a beautiful bay. At MAGNT she was shown the famous 1.7 ton, 16-foot saltwater crocodile ironically named ‘Sweetheart”, which was stuffed and mounted for display. Later Pacita wandered down to the shore

to get a better view of the bay when she heard someone shouting at her to get away from the water. She was surprised until she noticed that he was pointing to the sign, â&amp;#x20AC;&amp;#x153; No Swimming - Beware of Crocodilesâ&amp;#x20AC;?. During her earlier travels Pacita had seen crocodiles in Papua New Guinea and Africa, alligators in Florida, and had scuba dived in Southeast Asia among sharks, but she had never encountered crocodiles swimming in the ocean. She was told that over 100,000 crocodiles inhabit much of the northern Australian coastline and rivers and strike fear into numerous visitors, including Pacita. People then went on to tell her about about all of the other notoriously dangerous reptile, amphibian, mammal, bird and terrestrial crawlers inhabiting the sparsely-populated Northern and Central Australian region. This began to make her a bit nervous about her forthcoming trip around the Australian bush country. When she visited remote art centers Pacita was taken with the way many of the Aboriginal painters she met depicted the Australian desert animals in their artwork. In particular, she appreciated the artists in Arnhem Land using

their ochre colors and cross-hatched designs on bark, and was naturally drawn to the artists of the Central Desert applying their colorful dot motifs. (Left: Bardayal Nadjamerrek’s “Wurduyu Long-neck Turtles, and Nakekmi Sooty Gunters” – Right: Narputta Nangala’s “Lake MacDonald” (detail)) During her trips through the Northern Territory Pacita saw a wide array of Australian wildlife species of birds, reptiles, mammals and frogs in their natural habitats. These animals were incredibly diverse and many unique to

Australia reflecting its long isolation and evolutionary history. Naturally, she began to sketch and photograph many of the terrestrials, including lizards, frogs, turtles, snakes, crocodiles, birds, kangaroos, wallabies and many insects that she had never seen before. When Pacita finished traveling around the beautiful and harsh countryside of Australia&#39;s Northern Territory visiting national parks, wildlife reserves, aboriginal art centers and museums, she decided to create a new series of paintings, which she called “Crocodiles, Snakes &amp; Lizards” based on the numerous “Aussie Crawlers” she constantly saw throughout the Outback. Like the Aboriginal artists Pacita wanted to try to portray the spirit of the Northern Territory wildlife on both her canvas and handmade paper. As a painter she sometimes used her artistic freedom to introduce a few new species into Australia. These included the oryx she had seen in the deserts of Arabia and red cranes she had heard about in Japan. When asked why she included these animals in the Australian Outback, she retorted that camels, rabbits, buffaloes, fox and many other animals were brought into Australia from abroad, so she certainly could add a few more.

PAINTINGS Curator James Bennett excerpt from “Door to Life” by Pacita Abad “…Pacita Abad has been on a journey. This consumate artist and annotator of the heart’s responses to the foreign and wonderous asks us to look again and see with new eyes. … In the late 20th century the career development of few other such prominent creative personalities has been so measured by the pleasure of travel. For this gregarious and outgoing woman, who was born (as if by prophetic implication in a post office) on the island of Batanes midway between Luzon and Taiwan, the confines of a studios’ four walls have never satisfied the yearning to see and experience the world first hand. Pacita has authentically made the journey her unique artistic voice. Her biographer, Ian Findlay-Brown, has observed that travel and an appreciation of the importance of radically different cultures provides a fundamental focus for Paciita’s identity as a painter. … In this context we are indeed fortunate to have an artist such as Pacita Abad to document the colors and patterns of discoveries of arrival in another place.” James Bennett Curator of Southeast Asian Art and Materials Museum and Art Gallery of the Northern Territory Darwin, Australia

ARTIST PROFILE The internationally known Philippine-American painter Pacita Abad (19462004) was born on Batanes, a small island in the South China Sea. Her 32-year painting career began when she had to leave the Philippines in 1969 due to her student political activism against the dictatorship of Ferdinand Marcos, and traveled to the United States to study law. However, a few years after receiving a Master of Arts degree in Asian History from the University of San Francisco she switched careers to dedicate her life to art. She then studied painting at the Corcoran School of Art, Washington, D.C. and The Art Students League in New York City. Since that time Pacita never stopped being a gypsy artist and painted the globe while working on six different continents and traveling to more than 50 countries. During her career Pacita created over 5,000 artworks and her paintings were exhibited in more than 200 museums and galleries around the world. Pacitaâ&amp;#x20AC;&amp;#x2122;s travels significantly impacted her life and artistic style and were the inspiration for many of the ideas, techniques and materials that she incorporated in her paintings. Her journeys were also a tremendous crosscultural learning experience that made her acutely aware of the difficult lives that most women lead around the globe. They also heightened her sensitivity to the severe political, social, economic and environmental challenges she encountered across Asia, Africa and Latin America. Not surprisingly, as a socially concerned artist Pacitaâ&amp;#x20AC;&amp;#x2122;s early socio-political paintings were of urban poor, displaced people, political violence, refugees

and immigrants in countries where she worked such as Bangladesh, Sudan, Dominican Republic, Cambodia, Indonesia, the Philippines and the U.S. After her early social realism paintings, Pacita rejected the painterly emphasis on surface flatness, and sought ways to expand her painted canvases and make her work more sculptural. With the help of her sewing skills Pacita developed a unique, innovative painting style which she called trapunto painting, that fused her painted surfaces collaged with hand-stitched traditional materials, buttons, sequins, shells, mirrors and other found objects to blend with her signature strong colors. Her first series using this technique she called “Masks and Spirits” drawing on her travel experiences. Pacita created over 50 large, vibrantly colored, hand stitched and embellished trapunto paintings depicting masks and spirits from New Guinea, the Philippines, Indonesia, Africa and the Americas. Her next artistic plunge was literally underwater, as Pacita created very large and colorful trapunto painting series based on her deep-sea scuba diving experiences throughout the Philippines. Inspired by nature’s beauty she simultaneously worked on a extensive series of flora and fauna paintings from the Australian Outback and Asia’s tropical gardens. Throughout her career her work was characterized by color, constant change and experimentation. Her most comprehensive and extensive body of work, which she focused on during the second half of her career are vibrantly colorful abstract, mixed-media painted textile collages and assemblages inspired by her stays in Indonesia, Singapore, India and Yemen. Many are very large canvases, but also a number of small collages on a range of surfaces, as she continuously explored new mediums, techniques and materials including prints, paper, bark cloth, glass ceramic, steel and other mediums. Pacita also created a number of noteworthy public art installations such as her six-piece, Masks from Six Continents, in the main Washington, D.C. Metro Station; batik canvas collage titled Celebration and Joy installed at the Singapore Expo; large hand-stitched Zamboanga wedding tent adorned with native textiles called 100 Years Of Freedom: from Batanes to Jolo to celebrate

COSTUME DESIGNS Pacita was involved as a costume designer for a number of collaborative Asian theater groups • “Luna: Comic Drama and Art to Wear”, theater extravaganza for the New Millennium with an all star cast of Filipino artists, models and performers produced by Gilda Cordero Fernando and directed by Manny Chaves, Cultural Center of the Philippines, 2000 • “Long After Love”, Pacific Bridge Theater, Sackler Gallery, Smithsonian, 1992 • “Folktales of Lola Ita”, sponsored by Amauan, Applecore Theater, New York, NY 1988 WORKSHOPS AND LECTURES Pacita constantly gave workshops and artist talks to children, women and students across the world during her 32-year artistic career. 2004 “Painting the Globe” Artist Talk, Singapore Tyler Print Institute, Singapore &quot;ArtSingapore 2004: Asian Contemporary Art, Where Are We Going From Here?&quot; Artist Talk, Suntec City, Singapore &quot;Paper Pulp and Print&quot; Workshop for Globe Quest guest, in conjunction to the &quot;Circles in My Mind&quot; exhibition at the Cultural Center of the Philippines in Manila

Paintings of the Australian Outback by Pacita Abad. 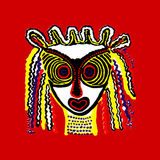