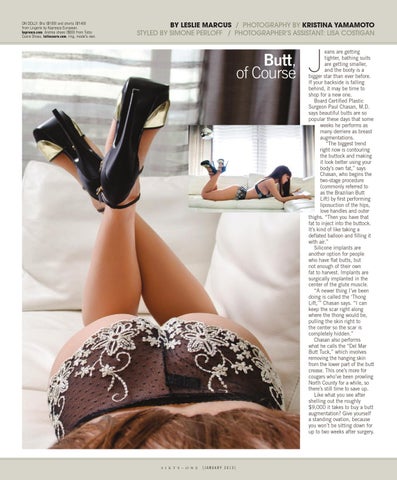 eans are getting tighter, bathing suits are getting smaller, and the booty is a bigger star than ever before. If your backside is falling behind, it may be time to shop for a new one. Board certified plastic surgeon Paul Chasan, M.D. says beautiful butts are so popular these days that some weeks he performs as many derriere as breast augmentations. “The biggest trend right now is contouring the buttock and making it look better using your body’s own fat,” says Chasan, who begins the two-stage procedure (commonly referred to as the Brazilian Butt Lift) by first performing liposuction of the hips, love handles and outer thighs. “Then you have that fat to inject into the buttock. It’s kind of like taking a deflated balloon and filling it with air.” Silicone implants are another option for people who have flat butts, but not enough of their own fat to harvest. Implants are surgically implanted in the center of the glute muscle. “A newer thing I’ve been doing is called the ‘Thong Lift,’” Chasan says. “I can keep the scar right along where the thong would be, pulling the skin right to the center so the scar is completely hidden.” Chasan also performs what he calls the “Del Mar Butt Tuck,” which involves removing the hanging skin from the lower part of the butt crease. This one’s more for cougars who’ve been prowling North County for a while, so there’s still time to save up. Like what you see after shelling out the roughly $9,000 it takes to buy a butt augmentation? Give yourself a standing ovation, because you won’t be sitting down for up to two weeks after surgery.