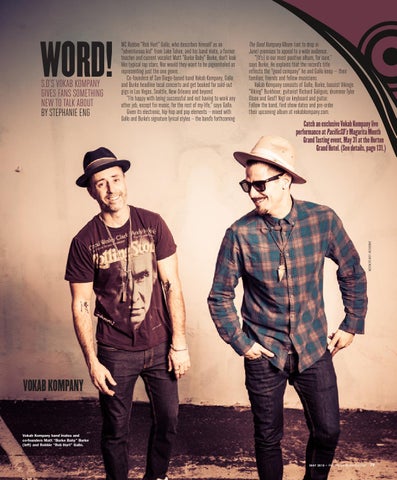 MC Robbie “Rob Hurt” Gallo, who describes himself as an “adventurous kid” from Lake Tahoe, and his band mate, a former teacher and current vocalist Matt “Burke Baby” Burke, don’t look like typical rap stars. Nor would they want to be pigeonholed as representing just the one genre. Co-founders of San Diego-based band Vokab Kompany, Gallo and Burke headline local concerts and get booked for sold-out gigs in Las Vegas, Seattle, New Orleans and beyond. “I’m happy with being successful and not having to work any other job, except for music, for the rest of my life,” says Gallo. Given its electronic, hip-hop and pop elements — mixed with Gallo and Burke’s signature lyrical styles — the band’s forthcoming

The Good Kompany Album (set to drop in June) promises to appeal to a wide audience. “[It’s] is our most positive album, for sure,” says Burke. He explains that the record’s title reflects the “good company” he and Gallo keep — their families, friends and fellow musicians. Vokab Kompany consists of Gallo, Burke, bassist Vikingo “Viking” Burkhiser, guitarist Richard Galiguis, drummer Tyler Olson and Geoff Nigl on keyboard and guitar. Follow the band, find show dates and pre-order their upcoming album at vokabkompany.com.

The Music Issue — see and win tickets to the hottest shows coming to San Diego this summer. Plus, May is #MargaritaMonth.