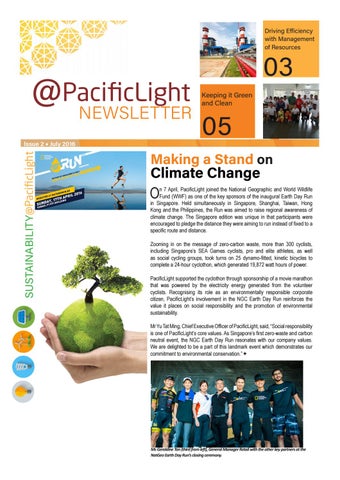 Driving Efficiency with Management of Resources

03 Keeping it Green and Clean

Making a Stand on Climate Change

n 7 April, PacificLight joined the National Geographic and World Wildlife Fund (WWF) as one of the key sponsors of the inaugural Earth Day Run in Singapore. Held simultaneously in Singapore, Shanghai, Taiwan, Hong Kong and the Philippines, the Run was aimed to raise regional awareness of climate change. The Singapore edition was unique in that participants were encouraged to pledge the distance they were aiming to run instead of fixed to a specific route and distance. Zooming in on the message of zero-carbon waste, more than 300 cyclists, including Singapore’s SEA Games cyclists, pro and elite athletes, as well as social cycling groups, took turns on 25 dynamo-fitted, kinetic bicycles to complete a 24-hour cyclothon, which generated 19,872 watt hours of power. PacificLight supported the cyclothon through sponsorship of a movie marathon that was powered by the electricity energy generated from the volunteer cyclists. Recognising its role as an environmentally responsible corporate citizen, PacificLight’s involvement in the NGC Earth Day Run reinforces the value it places on social responsibility and the promotion of environmental sustainability. Mr Yu Tat Ming, Chief Executive Officer of PacificLight, said, “Social responsibility is one of PacificLight’s core values. As Singapore’s first zero-waste and carbon neutral event, the NGC Earth Day Run resonates with our company values. We are delighted to be a part of this landmark event which demonstrates our commitment to environmental conservation.”

acificLight is proud to be awarded the globally-recognised certification BS OHSAS 18001: 2007 in addition to the Singapore Standard (SS) 506 Part 1:2009 certification by the Singapore Accreditation Council (SAC) which endorse PacificLight’s occupational health and safety management system. Benchmarked against the best in the industry, the certification was developed to recognise companies for their efforts to uphold standards in occupational health and workplace safety.

Said Mr Yu Tat Ming, Chief Executive Officer at PacificLight, “We are proud to have been awarded this globally-recognised certification in health and safety workplace practices. Safety is, and has always been, of utmost importance to us at PacificLight. It is heartening that we have achieved yet another important milestone as we continue to ensure PacificLight remains a safe and accident-free environment for all employees.” The audit was completed in two stages during November and December 2015. 

Moving in the Right Direction

acificLight has been conferred the SME100 Singapore Award 2016, which recognises the company as one of Singapore’s “Fastest Moving Companies” at an award presentation and gala dinner held at Marina Bay Sands on June 10. In her acceptance speech at the award ceremony, Ms Geraldine Tan, General Manager of Retail for PacificLight Energy, said that gaining a foothold in the well-established electricity market has not been easy for a new entrant such as PacificLight. “The SME100 Singapore award is not just a testament to the hard work of the staff at PacificLight in making our company what it is today, it also spurs us to scale to greater heights,” said Ms Tan. The annual award identifies and recognises Asia’s fast moving small and medium enterprises which have demonstrated strong growth and resilience.

acificLight held its inaugural Safety Day themed, “Think Safety, Work Safely”, at its power plant facility on Jurong Island in September. Targeted at staff working at the power plant, the HSE team and Safety Committee worked together to organise a half-day programme that included talks and demonstrations on working safely.

First aid demonstration by our in-house To ensure the power plant First Aid Team Lead remains an accident-free and safe environment for all employees, stringent HSE policies have been put in place. Such policies include wearing appropriate safety gear and boots when walking within designated sections at the power plant.

During the Safety Day, there were also demonstrations on first aid techniques and the use of fire extinguishers by the First Aid and Fire Safety teams, as well as a presentation on energy and water conservation. The Jurong Island staff also made personal commitments to uphold the safety and health standards within the facility. This event was commemorated with a mass signing of the Safety Day banner. 

Driving Efficiency with Management of

one-day, in-house workshop on resource efficiency was held for the Operations and Maintenance staff in June 2016.

The workshop was a ground-up initiative under the umbrella of the Centre of Excellence programme on Plant Reliability and Innovation. Led jointly by Mr Kwong Kok Chan, Deputy General Manager for Maintenance, and Mr Abu Bakar, Deputy General Manager for Operations, the teams were tasked with identifying current areas of inefficiency and proposing solutions to better manage resources used in the power plant. The workshop included a presentation on resource efficiency followed by a group activity which included examining all of the different areas within the power plant to identify how resources could be better managed. The teams then proposed solutions to improve efficiency, many of which have been approved for implementation.ď&amp;#x192;ś

s part of ongoing efforts to deliver convenience and value to customers, PacificLight Energy has launched a new e-portal. Available exclusively to customers, the e-portal provides 24/7 access to a range of services. Customers can now view account balances, bills and payment details, past and current invoices, electricity consumption charts and data, as well as track their carbon footprint in terms of electricity usage. Customers interested in accessing the e-portal can contact our Customer Service team or their Account Manager to register for an online account with a secure log-in.ď&amp;#x192;ś

n January PacificLight hosted a site visit for a group of 10 students from the Singapore Institute of Technology (SIT). A second group of students from Nanyang Polytechnic’s (NYP) Year 2 Electrical and Engineering cohort also visited the Jurong Island power plant in May.

Specially organised by the schools, the visit gave students a glimpse of energy and water conservation initiatives, energy supply options, and the water purification process. Led by Mr Kwong Kok Chan, Deputy General Student delegation from NYP being briefed by Manager for Maintenance at our Deputy GM for Maintenance PacificLight, the students also learnt more about the electricity market in Singapore and what goes on in a power plant. Mr Thomas Lim, Senior Manager of PacificLight Energy, gave the students a brief introduction to PacificLight’s retail business and the company’s energy products and services. Following the presentations, the students went on a tour of the power plant to better appreciate the operations as well as the engineering behind the power generation process. The company will continue to host more educational site visits for students from different educational institutions to generate more awareness about power generation, and the role it plays as a key infrastructure in Singapore’s urban landscape.

During his 12-week internship programme, Mr Thirukumaran S/O Govindaraju, a final-year student from NYP’s Diploma in Electrical Engineering with Eco-Design, assisted with a review of current stock inventory and undertook research on the investigation process. He also had the opportunity to participate in the retrofitting of the Variable Speed Device (VSD) to the Feed Water Pumps in October 2015. PacificLight strongly believes in building a firm foundation for the future generation through practical work experience. Students participating in PacificLight internship programme are offered on-the-job training and an in-depth understanding of the power industry, with the possibility of career opportunities within the industry.

rganised by the National Cancer Centre Singapore (NCCS) to raise awareness and support for cancer research, the 2016 Run for Hope saw an encouraging number of sign-ups from PacificLight staff this year. Since 2014, PacificLight has supported the cause through employees’ participation in the run.

experience taking part in the run alongside my colleagues. Not only was it a healthy way to demonstrate our support to this meaningful cause, I also enjoyed getting to know my colleagues better outside of work!” 

Each year, more than 10,000 people in Singapore are diagnosed with cancer, which accounts for one in four deaths. However, with advances in science and robust cancer research activities, there is hope for progressive breakthroughs that could eventually lead to a cure. Held at The Promotory@Marina Bay, the Run for Hope included two categories: a 10km run for avid runners and a 3.5km Fun Run for families and runners who prefer to take it at a slower pace. Said Mr Tan Han Seng, Snr Executive, IT Infrastucture “It was a great

PacificLight staff at the Run for Hope Charity Run

Keeping it Clean and

ingapore marked the annual World Water Day this year with a 4km community Walk-JogConserve@Jurong Lake on 12 March 2016 organised by the PUB. As a member of PUB’s Friends of the Water, PacificLight was represented by a group of volunteers who helped to keep the Jurong Lake trail clean, together with some students from Yuan Ching Secondary School. Designated by the United Nations, World Water Day celebrates the importance of water sustainability. World Water Day 2016 in Singapore revolved around the theme of “Make Every Drop Count” to underpin the active role each of us can play in water conservation. In addition, on 15 May, PacificLight participated in “Operation WE Clean Up” organised by the Taman Jurong Grassroots Club. The island-wide, one-day exercise saw individuals, schools, institutions and communities coming together to keep Singapore clean and green.

PacificLight staff and their family members with Deputy Prime Minister, Mr Tharman Shanmugaratnam (centre) at the Operations WE Clean Up event at Taman Jurong

PacificLight staff volunteers, together with their families, joined the residents from Taman Jurong to pick up litter and clean common areas at HDB flats within the constituency. The collected waste was weighed and recorded, whilst recyclable waste was packed for recycling. The activity served as a good reminder that everyone has an important role in keeping our country clean.