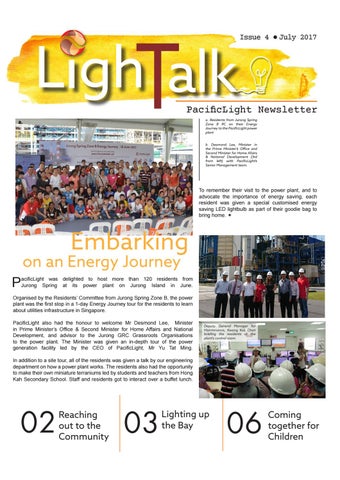 PacificLight Newsletter a. Residents from Jurong Spring Zone B RC on their Energy Journey to the PacificLight power plant b. Desmond Lee, Minister in the Prime Minister’s Office and Second Minister for Home Afairs &amp; National Development (3rd from left) with PacificLight’s Senior Management team.

To remember their visit to the power plant, and to advocate the importance of energy saving, each resident was given a special customised energy saving LED lightbulb as part of their goodie bag to bring home. 

on an Energy Journey P

acificLight was delighted to host more than 120 residents from Jurong Spring at its power plant on Jurong Island in June.

Organised by the Residents’ Committee from Jurong Spring Zone B, the power plant was the first stop in a 1-day Energy Journey tour for the residents to learn about utilities infrastructure in Singapore. PacificLight also had the honour to welcome Mr Desmond Lee, Minister in Prime Minister’s Office &amp; Second Minister for Home Affairs and National Development, and advisor to the Jurong GRC Grassroots Organisations to the power plant. The Minister was given an in-depth tour of the power generation facility led by the CEO of PacificLight, Mr Yu Tat Ming.

In addition to a site tour, all of the residents was given a talk by our engineering department on how a power plant works. The residents also had the opportunity to make their own miniature terraniums led by students and teachers from Hong Kah Secondary School. Staff and residents got to interact over a buffet lunch.

Reaching out to the Community

Lighting up the Bay

Coming together for Children

arch saw the conclusion of the Sustainable Singapore School Art Competition, organised by PacificLight and supported by South West CDC. Advocating the importance of conserving precious resources today and preserving our environment for the future, the competition was themed “Making Singapore a Better Place”. More than 10 Primary and Secondary “Green Schools” (as part of the Green Schools Initiative) in the South West district were invited to participate and think about habits they can adopt and actions they can take to help build a sustainable future for Singapore.

From more than 100 creative and thought-provoking entries, a total of 16 winners were selected. The winning art pieces were showcased at the Green School Camp @ South West, held at the Singapore Science Centre on 13 March. Jointly organised by the National Environment Agency (NEA) and South West CDC, the annual camp for selected ambassadors from participating schools aims to inculcate good public health and environmental protection habits among our youth. PacificLight contributed trophies and book prizes, which were presented to the art competition winners by the Guest-of-Honour and Mayor of the South West district, Ms. Loh Yen Ling. 

b. a. Mayor of Southwest CDC, Ms Loh

Yen Ling, with the winners from the Secondary school catergory

b. The Primary category winners with their artwork at the showcase during the Green School Camp held on 13 March 2017.

n March, PacificLight was invited by the Ministry of Environment, Water, and Resources (MEWRS), under the Sustainable Singapore Blueprint (SSB) movement, to talk about the company’s efforts and initiatives in water conservation. Together with a representative from Asia Pacific Brewery (APB), PacificLight’s Deputy General Manager for Maintenance, Mr. Kwong Kok Chan, joined a live interview segment for local Chinese radio station, Capital Radio 958, sharing PacificLight’s efforts to reduce water consumption at the power generation facility on Jurong Island. The 15-minute weekly segment is an initiative under the SSB movement, targeted at showing how SMEs play their part in environmental sustainability.

Reaching out to the Community

In addition to the radio interview, PacificLight participated in the Global Compact Network Singapore (GCNS) Youth Forum held on 22 April, which also saw speakers from Deutsche Bank, Intel, and the Singapore Nature Society. Mr. Kwong gave a presentation on how PacificLight is supporting Singapore’s commitment to sustainability through community engagement, while stressing the impact that individuals have on sustainability. Focused around discussions on corporate social responsibility, the inaugural forum was well-attended by youths aged 18 years and above. 

he waterfront at Marina Bay was set aglow by the iLight Marina Bay 2017 festival. PacificLight was a supporting sponsor at this year’s festival with an outdoor movie screening on 24 and 25 March 2017 held under the stars at The Lawn @ Marina Bay. Partnering with outdoor movie organiser, Movie Mob, the Recharge with PacificLight public screenings saw movie buffs enjoying family favourites, Zootopia and Miss Peregrine’s Home for Peculiar Children.

Held annually at the waterfront, the iLight Marina Bay is a showcase of light installations created by artists from Singapore and around the world. The light installations on display were designed and created based on the theme of Environmental Sustainability. In its fifth edition, the festival drew large crowds to the various themed hubs, with activities for all ages. The event promotes Marina Bay as a sustainable precinct, serving to encourage the public to adopt sustainable habits in their everyday lives.

ith the energy landscape in Singapore evolving over the last few years, the Energy Market Authority (EMA) has embarked on efforts to ignite, amongst Singapore’s youth, an interest and passion in the energy sector.

Next Generation As part of its manpower attraction programme, the regulator has been working with the country’s power companies to re-launch their portal, Powering Lives, that profiles a cross-section of jobs and personalities in the industry, highlighting the diversity of options available within the sector. The portal underwent a facelift and recently included a feature from an executive from PacificLight’s Energy Trading unit, on her role within the company. She shared that her role has given her a sense of purpose, knowing that she is securing the stability of Singapore’s energy future to support the country’s economy, “Being a trader in the electricity industry is much more than staring at a computer screen and dealing with daily market uncertainties.” 

acificLight was named a finalist, as Asia Pacific Risk Management Team of the Year 2017 under the 2017 Strategic Risk Awards. Celebrating the achievements of practitioners across all aspects of risk management, a total of 17 categories of winners were recognised in areas such as Asia Pacific Risk Manager for the Year, Enterprise Risk Programme of the Year, Best Risk Training Programme for the Year, and Best Business Continuity Approach of the Year. PacificLight’s successful submission focused on its company wide commitment to risk management, including commercial, safety, technical, cybersecurity, and insurance.

y invitation from the Singapore Manufacturing Federation (SMF), PacificLight Energy’s General Manager, Ms. Geraldine Tan, was part of a panel of speakers at the Asian Utility Week 2017 seminar, held at the SMF Auditorium. Focusing on Innovations in Energy Services, discussions were centred on energy efficiency, emission control regimes, and renewable energy solutions. With Singapore’s focus on energy efficiency, Ms. Tan discussed energy efficiency as a business strategy and how innovation is reshaping the energy industry. The complimentary seminar was attended by professionals, energy managers, facility managers, and energy service professionals from across the Asia Pacific region.

In his role with PacificLight, Mr. Apurva will head the company’s finance department and assist the Chief Executive Officer, Mr. Yu Tat Ming, in developing business strategies and a roadmap of the company’s business processes. Mr. Apurva was formerly the CFO of GMR Infrastructure Ltd, which saw him managing relationships with a network of banks, consultants, and advisors. He played a key role in the acquisition of PacificLight’s power generation facility in 2009 and managed the project financing during the construction phase. His key role in negotiations helped GMR Infrastructure close the sale of its stake in PacificLight to present shareholder, PETRONAS Sdn Bhd.

acificLight was honoured to be the first company to be invited by Shell Singapore to present at their recently launched 2017 Learning Roundtable Series.

Ms Geraldine Tan, General Manager of PacificLight Energy kicked off the series with a presentation on Singapore’s electricity market. Ms Tan shared with staff from the Gas &amp; Energy Marketing and Trading department on the trends, opportunities and challenges with Singapore’s electricity market. Staff from Shell’s other global offices had the opportunity to partake in the session through live webinar and audio or listen to a recording after the event. The Learning Roundtable Series has been recently been established by Shell as a new learning initiative. The series provides staff with insights on various energy segments to encourage more innovative, commercial value-creation opportunities in their daily roles.

Announcement: We have Moved!

With effect from 3 July 2017, our new corporate office has been relocated to The JTC Summit in Jurong East. Our new address is at 8 Jurong Town Hall Road, #12-01/06 The JTC Summit, Singapore 609434. All telephones lines, including the main line and fax number remain unchanged.

olunteers from PacificLight started the year in a meaningful way at the Willing Hearts Soup Kitchen. The company has been supporting the soup kitchen for over two years in its cause to provide over 5,000 cooked meals for the disadvantaged in Singapore on a daily basis. Staff volunteered on a daily basis their time over a weekend in February to help with preparing and cutting up vegetables for cooking.

Staff volunteers helping out at the Willing Hearts Soup Kitchen with food preparation.

PacificLight also participated in Singapore’s World Water Day, with staff volunteers helping to distribute flyers to Jurong West residents. Aimed at spreading awareness of the need to conserve water, the event was held at the open hardcourt in Jurong West and was graced by the Senior Minister of State for the Ministry of Home Affairs and Ministry of National Development, Mr. Desmond Lee.

PacificLight staff volunteers and students from Juying Secondary School doing their part to keep the waterway clean at the 2017 Singapore World Water Day.

The programme concluded with PacificLight volunteers clearing litter along the Jurong Canal, together with teachers and students from Juying Secondary School. 

A fun day was had by all and the PacificLight’s volunteers assisted the teacher chaperons with the task of caring for the children and keeping a close watch on them. They were also encouraged to interact and keep the children engaged. Although the outing started off with wet weather, this did not dampen the mood of the children and volunteers who had a good time with the children on the boat ride.

Volunteers from the various electricity companies and retailers during the charity outing along with the children and teachers from Children 21.

n May, the children from Child at Street 11 got an amphibious fun day on the DUCK tour organised by the Electricity Market Company (EMC). Every year, EMC organises a half-day outing to places of interest or an activity for the children from the centre. Electricity generation companies and electricity retailers are encouraged to volunteer during the outings or activities as chaperons to the children. PacificLight supported the outing this year with staff from the Retail team volunteering their time for this good cause.

These annual charity outings not only provided the opportunity to come together as an industry for a good cause but also provided an additional platform for networking among the electricity generation companies and electricity retailers. A total of 45 volunteers participated in the outing with 32 children and 5 teachers. Child at Street 11 is a not for profit organisation that looks after the emotional and educational needs of vulnerable children in the Ang Mo Kio area. The 18 year old childcare centre has about 55 children aged 20 months to 12 years. Looked after by a team of trained teachers and support staff, the children learn language and numeracy skills in real life learning environments. Their rich educational diet includes collaboration work with our local community and in international projects that give significance to their right to be heard and respected. 

PacificLight's in-house newsletter on the development and happenings in and around the company. Published bi-annually.