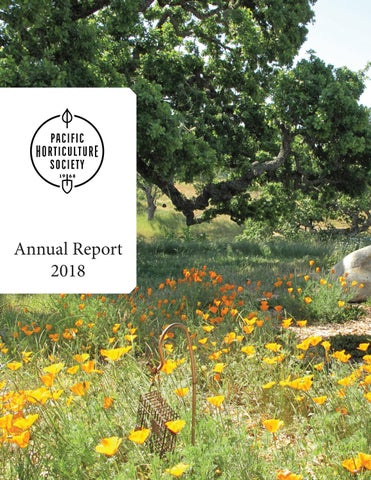 People Connecting with the Power of Gardens Executive Director’s Message

Pacific Horticulture Society promotes horticultural and environmental literacy by increasing awareness of the power of gardens to enrich people’s lives and help heal the planet. We believe that understanding the important role of landscapes in pushing back on climate change is a foundation for healing the environment.

As we embark on Pacific Horticulture Society’s next 50 years of operations, I find myself reflecting on the importance of broad financial and community support for non-profit organizations. In 2018 we faced a very difficult choice about whether or not to continue operations. The decision was not just financial, but cultural and philosophical too. We wrestled with the extent to which the organization was inextricably entwined with Pacific Horticulture magazine, and what it means to be a publisher in the digital world of 2018. Ultimately, we chose to transform the organization in many significant ways which will emerge more clearly in 2019. I am very proud of our staff and board for digging into the strategic issues and for making difficult choices in order to bring PHS back into operational stability. I am encouraged by the continued support and reengagement of members of the PHS community. In 2018 we offered exceptional programming, including four issues of Pacific Horticulture, tours to exotic and intriguing places around the world, and two unique educational/fundraising events in the native gardens and grasslands of California. 2018 was the first of a trio of transition years for PHS, and it has paved the way for an even better 2019 and beyond.

Board Chair’s Message Over Pacific Horticulture Society’s proud 50-year plus history, so much has changed and grown. Ideas, gardens, and plant people have rooted, leafed out, flowered, and seeded in order to start the cycles again – and again – always with heart, purpose, and beauty in quality publications and educational events across PacHort’s West Coast region. As I term out after 6 years serving on the board, I look back at the legacy garden this community of people is and I’m humbled to be part of such a continuum – of plantspeople, thinkers, readers, visionaries. I see the vitality of the society’s current board and staff -- the next in a long line of successions - reimagining exactly what a horticultural society is and should be in the 21st century, and I’m confident. For the Pacific Horticulture Society, like any living landscape, dynamic change is the greatest constant – ever evolving, adapting, and bringing forth the next growing season. I’m looking forward to the harvests, and subsequent succession plantings dedicated to the future. With deep appreciation for the first fifty years, and cheers to the next. Jennifer Jewell Office@PacificHorticulture.org

In 2018, PHS moved forward with establishing greater operational stability, and put in place the foundation to meet its mission of promoting horticultural literacy throughout the Pacific region. This year, PHS:

lenge with operating revenues from September to December, demonstrating solid financial processes for retaining members, growing the number of individual supporters, and selling out tours.

• Received funding from the Elisabeth Carey

Miller Foundation to produce a series of free webinars for 2019.

program that put in place agreements with four of the PHS founding horticultural societies, providing them with direct member benefits and simplifying processes for PHS.

• Created a ten-fold increase in PHS reach through social media, and commited to producing a monthly newsletter.

tion with the PHS board meetings in Portland, OR (July) and Berkeley, CA (December), creating a model for community engagement.

• Sold out eight of our horticultural tours to:

events at the Gottlieb Native Garden (March) and at Gabilan Ranch (October), creating a model for board-hosted fundraising in 2019.

• Transitioned with a new Executive Director

and office staff and migrated contacts to Donor Perfect, a new relational data base for managing donor interactions.

Affiliated Member Organizations The PHS mission is to facilitate cross-pollination of all horticulture and garden-oriented organizations within the Pacific region. This year, PHS forged revitalized relationships with several of the largest horticultural societies, organizations and founders of PHS. The Affiliated Member Organization (AMO) agreements allowed PHS to reset its relationship with the members of these societies by offering them the option of becoming Individual PHS members and enjoying the full benefits of that membership, including receiving printed versions of publications. In exchange for helping PHS create direct relationships with its members, the AMO receives a link to the digital version of PHS publications, including Pacific Horticulture magazine, and promotion of their programming throughout the Pacific region. PHS also gives AMOs a discount on PHS membership and creates direct promotional assets in digital and print media.

New Content Creation In 2018, PHS published four issues of Pacific Horticulture magazine and began offering delivery in digital format. The Fall issue was distributed via email to our AMO Partners and all of our Individual members who provided email addresses. This is an exciting development, as it allows PHS to grow its audience through alliances with other organizations without incurring the associated printing and mailing costs.

This year we continued focusing on improving the quality of the images we publish, diversifying our regional spotlights, and developing strategic content relationships, including with our AMO partners.

# of original PHS articles posted on social media in 2018

The PHS board volunteer-managed social media program launched in early 2018, creating a powerful tool for expanding the reach of original PHS educational content and responding to the market demand for relevant horticultural and environmental information. This yearâ&#x20AC;&#x2122;s intention was to build a stronger community around information sharing and reinforce the PHS mission with our social media audience. The team also developed a consistent design for original messaging to help establish visual brand recognition across all social media platforms. A new flow of content creation and distribution allowed us to combine information from expert sources throughout the region with archived articles and current issues of Pacific Horticulture to spread horticultural understanding to 195,000 unique visitors. Social media is leading people back to the PHS website and converting them into active members of our community, as well as shining a light on our incredibly rich library. C O N N E C T

Portland, July 2018 - PHS travel conceirge and board member Linda McKendry looks on as fellow board member Bob Hyland reminds us that PHS is strong because of members like YOU! PHOTO: Laura Wilson

The PHS board turned its face-to-face meetings into opportunities to gather with members of the local garden and horticulture communities in Portland, Oregon and Berkeley, California. Mini garden tours of local members’ gardens preceded the full day board meeting. Afterward, local board members hosted a member appreciation gathering. These “friendraising” events allowed us to reinforce or reconnect with PHS supporters and members who wanted to know more about how PHS was meeting its operational challenges. The result was the start of an ongoing commitment to create member appreciation events and personal outreach as PHS moves its board meetings around the region.

Bob Hyland and his partner, Andrew Beckman (both at right) hosted our member appreciation event introducing the PHS board to designers and garden enthusiasts in the Portland, Oregon area. PHOTO: Sairus Patel

The Gottlieb Native Garden, a unique residential native garden just a couple of miles from the heart of Beverly Hills, CA was the site of a PHS fundraiser in March 2018. PHOTO: Princess Norman

The ranch house at Gabilan Cattle Co. was the site of the PHS fundraiser luncheon in October 2018. PHOTO: Laura Wilson

Attendees learned how a traditional bio-deficient urban landscape can be completely regenerated into a dynamic and abundant ecosystem with more than 200 native plant species supporting nearly 400 wildlife species. All it takes to make this kind of transformation is intent and knowledge, which PHS provides through its emphasis on environmental literacy.

A view of the Gottlieb garden with fish pond. PHOTO: Susan Gottlieb

Pac Hort Tours 2018 closed on another successful year of stellar horticultural tours hosted by PHS. Photos from our tours provide our social media team with experiences to share in real time with the greater PHS community, and 140 people were able to travel with us to eight domestic and international destinations.

Donations to PHS from the tour program represented 16% of the PHS total annual revenue. This year we began pre-qualifying our tours for Continuing Education Units from organizations such as APLD. We expect this to open up more opportunitites for landscape professionals throughout the U.S. to join us on our tours. We also began a planning process to evaluate our tours in order to ensure that we are creating unique and memorable experiences on every journey. Although PHS has always received great reviews for its tours, we are committed to continuous improvement. This includes using input from our guests to inform our choices of destination, itinerary, and educational content.

Philadelphia, June 2018 - PHS travelers were thrilled to visit to some of the best private and public gardens in Philadelphia, including garden of Regina Thomas shown here. PHOTO: Sue Goetz

In 2018 PHS concentrated on developing and implementing new systems and policies to better manage cash flow. This process began in late 2017 when we initiated a migration of our donor management to a powerful new relational database. In May we changed our membership category structure, exchanging indirect “society” memberships with direct Individual memberships. We also halved the cost of our bi-annual donation drive by switching from letters to postcards and encouraging online transactions. In July we increased the minimum price of Individual membership to $50/year and changed member benefits to provide digital-only delivery of Pacific Horticulture magazine to certain members. In September we began sending bi-weekly renewal emails, improving our member retention rates and further reducing the cost of bi-annual renewal mailings.

Through the generosity and commitment of our PHS community, we were able to match a $50K challenge grant from the Left Coast Fund and several of our PHS board members. We also received a $10K Pendelton and Elisabeth Carey Miller Charitable Foundation grant to develop and deliver free horticultural programming in 2019. We are not out of the woods yet, but we are committed to growing new and renewing memberships and unrestricted donations to meet the coming years’ challenges.

Pacific Horticulture Society is a 501 (c) (3) organization dedicated to promoting horticultural and environmental literacy throughout the Pacific region. A copy of the latest official registration and financial report may be obtained by contacting PHS at our mailing address. 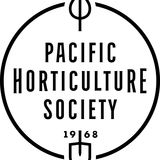