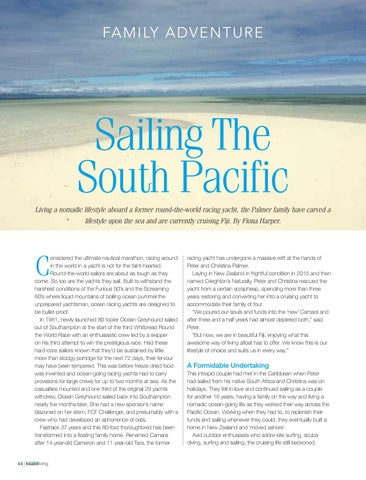 Sailing The South Pacific Living a nomadic lifestyle aboard a former round-the-world racing yacht, the Palmer family have carved a lifestyle upon the sea and are currently cruising Fiji. By Fiona Harper.

onsidered the ultimate nautical marathon, racing around in the world in a yacht is not for the faint-hearted. Round-the-world sailors are about as tough as they come. So too are the yachts they sail. Built to withstand the harshest conditions of the Furious 50’s and the Screaming 60’s where liquid mountains of boiling ocean pummel the unprepared yachtsman, ocean racing yachts are designed to be bullet proof. In 1981, newly launched 80 footer Ocean Greyhound sailed out of Southampton at the start of the third Whitbread Round the World Race with an enthusiastic crew led by a skipper on his third attempt to win the prestigious race. Had these hard-core sailors known that they’d be sustained by little more than stodgy porridge for the next 72 days, their fervour may have been tempered. This was before freeze dried food was invented and ocean-going racing yachts had to carry provisions for large crews for up to two months at sea. As the casualties mounted and one third of the original 29 yachts withdrew, Ocean Greyhound sailed back into Southampton nearly five months later. She had a new sponsor’s name blazoned on her stern, FCF Challenger, and presumably with a crew who had developed an abhorrence of oats. Fastrack 37 years and this 80-foot thoroughbred has been transformed into a floating family home. Renamed Camara after 14 year-old Cameron and 11 year-old Tara, the former

racing yacht has undergone a massive refit at the hands of Peter and Christina Palmer. Laying in New Zealand in frightful condition in 2015 and then named Crieghton’s Naturally, Peter and Christina rescued the yacht from a certain scrapheap, spending more than three years restoring and converting her into a cruising yacht to accommodate their family of four. “We poured our souls and funds into the ‘new’ Camara and after three and a half years had almost depleted both,” said Peter. “But now, we are in beautiful Fiji, enjoying what this awesome way of living afloat has to offer. We know this is our lifestyle of choice and suits us in every way.”

A Formidable Undertaking This intrepid couple had met in the Caribbean when Peter had sailed from his native South Africa and Christina was on holidays. They fell in love and continued sailing as a couple for another 16 years, having a family on the way and living a nomadic ocean-going life as they worked their way across the Pacific Ocean. Working when they had to, to replenish their funds and sailing whenever they could, they eventually built a home in New Zealand and ‘moved ashore’. Avid outdoor enthusiasts who adore kite surfing, scuba diving, surfing and sailing, the cruising life still beckoned, 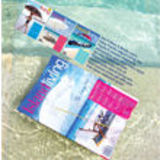