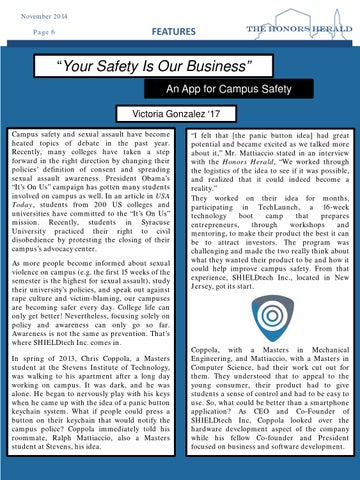 “Your Safety Is Our Business” An App for Campus Safety Victoria Gonzalez ‘17 Campus safety and sexual assault have become heated topics of debate in the past year. Recently, many colleges have taken a step forward in the right direction by changing their policies’ definition of consent and spreading sexual assault awareness. President Obama’s “It’s On Us” campaign has gotten many students involved on campus as well. In an article in USA Today, students from 200 US colleges and universities have committed to the “It’s On Us” mission. Recently, students in Syracuse University practiced their right to civil disobedience by protesting the closing of their campus’s advocacy center. As more people become informed about sexual violence on campus (e.g. the first 15 weeks of the semester is the highest for sexual assault), study their university’s policies, and speak out against rape culture and victim-blaming, our campuses are becoming safer every day. College life can only get better! Nevertheless, focusing solely on policy and awareness can only go so far. Awareness is not the same as prevention. That’s where SHIELDtech Inc. comes in. In spring of 2013, Chris Coppola, a Masters student at the Stevens Institute of Technology, was walking to his apartment after a long day working on campus. It was dark, and he was alone. He began to nervously play with his keys when he came up with the idea of a panic button keychain system. What if people could press a button on their keychain that would notify the campus police? Coppola immediately told his roommate, Ralph Mattiaccio, also a Masters student at Stevens, his idea.

“I felt that [the panic button idea] had great potential and became excited as we talked more about it,” Mr. Mattiaccio stated in an interview with the Honors Herald, “We worked through the logistics of the idea to see if it was possible, and realized that it could indeed become a reality.” They worked on their idea for months, participating in TechLaunch, a 16-week technology boot camp that prepares entrepreneurs, through workshops and mentoring, to make their product the best it can be to attract investors. The program was challenging and made the two really think about what they wanted their product to be and how it could help improve campus safety. From that experience, SHIELDtech Inc., located in New Jersey, got its start.

Coppola, with a Masters in Mechanical Engineering, and Mattiaccio, with a Masters in Computer Science, had their work cut out for them. They understood that to appeal to the young consumer, their product had to give students a sense of control and had to be easy to use. So, what could be better than a smartphone application? As CEO and Co-Founder of SHIELDtech Inc, Coppola looked over the hardware development aspect of the company while his fellow Co-founder and President focused on business and software development.