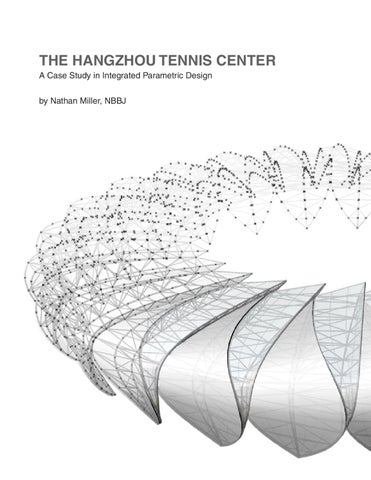 Abstract This paper will provide a detailed overview of the parametric methodologies which were integral to the design and development of the Hangzhou Tennis Center. The tennis center is a 10,000 seat facility located in Hangzhou, China and is a part of a larger sports and entertainment master plan which features retail, public recreation, and an Olympic-size stadium to be completed in 2013. The design of the stadium envelope is based on a modular system of sculptural steel trusses which provide shade and house the arenaâ&#x20AC;&#x2122;s technical systems.

design the exterior, an integrated parametric system was created to conceptualize, simulate, and document the complex geometric systems. For conceptualization, the parametric system was set up to explicitly define the control surface geometry and study formal variations. Physics simulation tools were used to test basic structural behavior. For detailed analysis and engineering, custom scripts were used to automate the communication of centerline information to the structural engineering team. For the documentation process, parametric workflow systems were invented to link together disparate design and documentation environments for a more seamless international collaboration.

and delivery of the Hanghou Tennis Center.

in the design process at NBBJ. The demand for formal innovation and

necessitated that designers search for novel processes which extend their capabilities beyond â&#x20AC;&#x2DC;out-of-the-boxâ&#x20AC;&#x2122; 3D

The Hangzhou Tennis Center is a 10,000-seat tennis

in collaboration with CCDI, designed the Tennis Center

at NBBJ to negotiate the complexities associated with

as part of a larger sports and recreation master plan

which includes an 80,000 seat Olympic-size stadium, an extensive retail development, and a public recreation

The topic of design computation is ultimately a topic of

park. The main stadium and the tennis finals court are

relevance for the AEC professional practicing in the

the two main structures on the site. Both facilities share

21st century. What emerging technologies will help us

extend our ability to navigate the complexities of a global

economy? What tools will help the designer realize their visions and enable new constructions to perform better

Construction documents for the main stadium were

The Hangzhou Tennis Center design team had to negotiate

phase. Rhinoceros 3D with the Grasshopper plug-in were

a range of challenges whose solutions were enabled, in

instrumental tools for the design and documetation for

part, by the customization of parametric tools in addition to

the implementation of new computational processes. This The Hangzhou Tennis Center: A Case Study in Integrated Parametric Design

Process For the tennis center finals court, a parametrically-driven process was implemented.

algorithm was developed in Grasshopper and was used to study the stadium geometry and coordinate information with the team of collaborators. Exceeding the capabilities for the main stadium system, the tennis center algorithm was significantly expanded and included integrated capabilities for:

physics simulation for an intuitive understanding

parametrically generated models for use in

systems for elements which cannot be

Geometry Design The exterior envelope is composed of a twenty-four truss modules arrayed around a circular arc. Referred to as ‘petals’, the trusses create a large-scale repetitive pattern which encloses the stadium seating bowl. In addition to giving the tennis stadium its visual image, the shell also functionally provides shade and rain protection for the seating bowl.

The structure also houses the stadium

Figure 2 The algorithm for defining the geometry of the exterior shell. A point cloud driven by circular arcs creates the control system for NURB control surfaces.

technical equipment such as the sports lighting.

Figure 3. Variations on the exterior envelope. The point cloud constraints were manipulated to create different geometric effects. The number of petal modules could also be increased or decreased.

The initial surface geometry served as a constraint system

for building additional complexity into the envelope at later

drivers for arriving at the final form.

stages. The modular system was defined parametrically by establishing a point cloud system which would serve

Given the integral relationship between the form and

the structure, the design team engaged in a very close dialogue with the structural engineers. NBBJ worked with

the entire envelope was computed at this stage. This

approach improved the computational performance of

the system allowing for much quicker iterations while still

were established to allow control over structural member

enabling the designers to evaluate the overall appearance.

The engineers required a structural centerline model which could be used for analysis.

The parametric definition of the exterior geometry allowed

process, the Grasshopper algorithm would automate the

generation of a wireframe structure which was compatible

with the tolerances of the engineerâ&#x20AC;&#x2122;s analysis software.

Parametric control of the point cloud was the primary

(Figure 4) This allowed the teams to eliminate, with some

means of controlling the form. Parameters for manipulating

associated with rebuilding an engineering-specific model.

team to study different configurations of the exterior

In addition, adjustments could quickly be made to the

While much of the evaluation was based on aesthetic judgment, parameters for shade, drainage, structural The Hangzhou Tennis Center: A Case Study in Integrated Parametric Design

While the structural team was able to perform a

Kangaroo physics, in combination with a visualization

was added into the Grasshopper algorithm.

script, was used to provide an intuitive display for how forces moved through the structure. Tensile and compressive forces could be visualized in addition to areas of maximum stress. Having this capability embedded into the design model at a conceptual level allowed the design team to make more informed decisions and engage in a more nuanced dialogue with the structural engineering team.

Surface analysis was also integrated into the parametric algorithm in order to visualize and quantify areas of curvature in the geometry. The ruled surface of the petal was paneled using the UV coordinates of the surface.

Figure 6. Variations on the exterior envelope. The point cloud constraints were manipulated to create different geometric effects. The number of petal modules could also be increased or decreased.

Each panel was tested for planarity.

informed the selection of a standing-seam aluminum

automated the export process of key model elements to

a file system of 3D DWGs. The script enabled automatic

the visual appearance of the panel seams, spacing, and

updating of converted files so external applications could

make use of the most up to date information.

The fabrication process of the aluminum panels allow

The design team used this method as the primary means

for continuous spans from each edge of the surface

of translating the 3D information into the Autodesk Revit

components which remained true to the ruled surface UV parameterization.

For the design development phase of the tennis center,

The drawings of the exterior shell were exchanged with

the tennis stadium geometry needed to be documented.

the CCDI team for inclusion in the 2D documentation set.

In addition to being an essential tool for geometric

development and structural design, the Grasshopper

For geometry which could not be described using

orthographic projection, the algorithm was also used to produce 2D descriptive geometry. In the case of the petal

The author would like to acknowledge the NBBJ and

CCDI Hangzhou design and engineering teams for their

the unrolling of the ruled-surfaces. These drawings were

collaborative partnership on an exceptional project.

used in conjunction with a surface quantity spreadsheet. The algorithm also produced a live spreadsheet which

Historically, the AEC industry has been slow to adopt new technologies into the design process. Many of the tools

production processes that have been in place for decades

However, the rapid acceleration towards global practice coupled

economies necessitate that architects develop their

systems and processes to be adaptive and flexible. The

Hangzhou Sports center is an example of process a where

new design tools were invented, developed, integrated, coordinated, modified and shared for the purposes of delivering a project of special civic value in China.

This paper was originally published as part of the 2011

in construction, leadership on international designs, and

ACADIA Regional Conference hosted by the University of

Nebraska-Lincoln. The full conference proceedings can be downloaded from the UNL Digital Commons:

Over the past four years, Nathan has been leading NBBJ in the development and implementation of computational design systems for developing generative concepts,

growing the firm’s expertise in design computation. The

operations of the strategy include the delivery of extensive

team workshops and project support for advanced digital capabilities. Nathan is fluent in several programming and scripting languages and frequently employs this knowledge to extend the capabilities of design software. As an avid blogger, Nathan frequently publishes scripts, plug-ins, and design explorations to The Proving Ground. Nathan has lectured on the topic of design and computation at venues including the ACADIA conference, the ACSA conference, the annual USC BIM symposium, and the Los Angeles Design Technology Forum. Nathan is also a part-time instructor at the University of Southern California where he instructs seminars on performancedriven parametric design and evolutionary computation. Nathan holds a Masters of Architecture degree from the University of Nebraska-Lincoln. 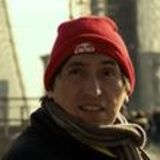