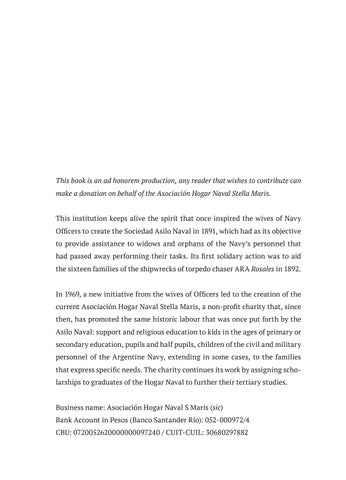 This book is an ad honorem production, any reader that wishes to contribute can make a donation on behalf of the Asociación Hogar Naval Stella Maris. This institution keeps alive the spirit that once inspired the wives of Navy Officers to create the Sociedad Asilo Naval in 1891, which had as its objective to provide assistance to widows and orphans of the Navy’s personnel that had passed away performing their tasks. Its first solidary action was to aid the sixteen families of the shipwrecks of torpedo chaser ARA Rosales in 1892. In 1969, a new initiative from the wives of Officers led to the creation of the current Asociación Hogar Naval Stella Maris, a non-profit charity that, since then, has promoted the same historic labour that was once put forth by the Asilo Naval: support and religious education to kids in the ages of primary or secondary education, pupils and half pupils, children of the civil and military personnel of the Argentine Navy, extending in some cases, to the families that express specific needs. The charity continues its work by assigning scholarships to graduates of the Hogar Naval to further their tertiary studies. Business name: Asociación Hogar Naval S Maris (sic) Bank Account in Pesos (Banco Santander Río): 052-000972/4 CBU: 0720052620000000097240 / CUIT-CUIL: 30680297882