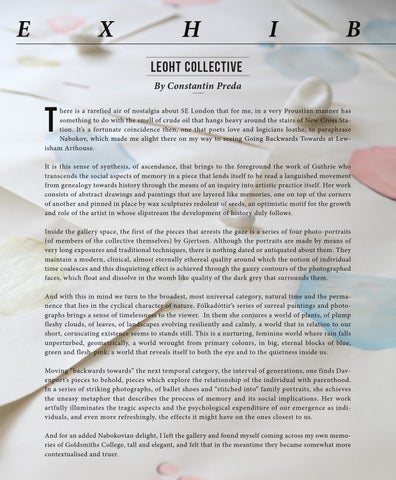 here is a rarefied air of nostalgia about SE London that for me, in a very Proustian manner has something to do with the smell of crude oil that hangs heavy around the stairs of New Cross Station. It’s a fortunate coincidence then, one that poets love and logicians loathe, to paraphrase Nabokov, which made me alight there on my way to seeing Going Backwards Towards at Lewisham Arthouse. It is this sense of synthesis, of ascendance, that brings to the foreground the work of Guthrie who transcends the social aspects of memory in a piece that lends itself to be read a languished movement from genealogy towards history through the means of an inquiry into artistic practice itself. Her work consists of abstract drawings and paintings that are layered like memories, one on top of the corners of another and pinned in place by wax sculptures redolent of seeds, an optimistic motif for the growth and role of the artist in whose slipstream the development of history duly follows. Inside the gallery space, the first of the pieces that arrests the gaze is a series of four photo-portraits (of members of the collective themselves) by Gjertsen. Although the portraits are made by means of very long exposures and traditional techniques, there is nothing dated or antiquated about them. They maintain a modern, clinical, almost eternally ethereal quality around which the notion of individual time coalesces and this disquieting effect is achieved through the gauzy contours of the photographed faces, which float and dissolve in the womb like quality of the dark grey that surrounds them. And with this in mind we turn to the broadest, most universal category, natural time and the permanence that lies in the cyclical character of nature. Fólkadóttir’s series of surreal paintings and photographs brings a sense of timelessness to the viewer. In them she conjures a world of plants, of plump fleshy clouds, of leaves, of landscapes evolving resiliently and calmly, a world that in relation to our short, coruscating existence seems to stands still. This is a nurturing, feminine world where rain falls unperturbed, geometrically, a world wrought from primary colours, in big, eternal blocks of blue, green and flesh-pink; a world that reveals itself to both the eye and to the quietness inside us. Moving “backwards towards” the next temporal category, the interval of generations, one finds Davenport’s pieces to behold, pieces which explore the relationship of the individual with parenthood. In a series of striking photographs, of ballet shoes and “stitched into” family portraits, she achieves the uneasy metaphor that describes the process of memory and its social implications. Her work artfully illuminates the tragic aspects and the psychological expenditure of our emergence as individuals, and even more refreshingly, the effects it might have on the ones closest to us. And for an added Nabokovian delight, I left the gallery and found myself coming across my own memories of Goldsmiths College, tall and elegant, and felt that in the meantime they became somewhat more contextualised and truer. 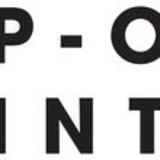 Appreciation of words with substance and meaning, and we aimed to bring this back to the fore and used visual imagery as a secondary enhance...

Appreciation of words with substance and meaning, and we aimed to bring this back to the fore and used visual imagery as a secondary enhance...