Panax, the genus name for ginseng, comes from a Greek word that means “All Healing”. Since their discovery in the mountains of Manchuria, China, some 5,000 years ago, wild ginseng roots have been highly sought after for their tonic effect on the body and mind. Nearly all of the world’s ginseng comes from China, South Korea, Canada, and the U.S. Panax ginseng is the Asian species of ginseng, while Panax quinquefolius is the North American species. Ginseng habitat in the Eastern half of the U.S. is concentrated mostly in the Appalachians and some in the Ozarks. Frontiersmen Daniel Boone and Davy Crockett dug for ginseng and sold tons of it for profit. Of course, Native Americans had discovered and were using ginseng before its commercial export began in the 18th century. Still today, China is the destination for most American ginseng. The real demand is for older, wildharvested roots – the more gnarled the better. After many changes of hand, the American ginseng roots reach China and can bring in a couple thousand dollars per pound. You can imagine the appeal for rural root diggers here in the Ozarks. Popularity and overharvest is an age-old story we’ve seen play out time and again in the hills and hollers. It’s no surprise that ginseng has seemingly a permanent spot on the United Plant Savers “At-Risk” list. Madison Woods is a local expert on this perennial woodland herb – aptly named, as she resides in the woods of Madison County of Northwest Arkansas. More astute than most 28 |

about American Ginseng, Madison does habitat consultation, as well as promotes sustainable harvest and use of ginseng. Years ago, she relocated to the Ozark Mountains from Louisiana in the pursuit of growing her own ginseng, reestablishing other at-risk native woodland plants, and wild-crafting*. My husband, Brian, and I met with Madison on an unseasonably chilly day in May, and straightaway started attempting to absorb the herbal knowledge that she was speaking so fluently. She and her husband, Rob, are the sole operators of Wild Ozark – the only licensed ginseng nursery in Arkansas. In addition to selling ginseng seedlings, certified dried roots and 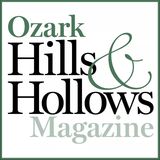 Celebrating Heritage, Farm and Healthy Living in the Heart of America

Celebrating Heritage, Farm and Healthy Living in the Heart of America