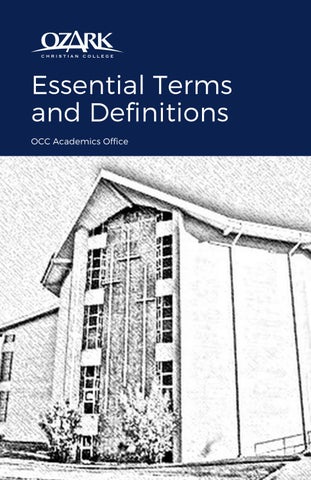 Important words and definitions to know

At Ozark Christian College, a critical element of our academic goal is that our graduates will be well grounded in the firm foundation of Scripture. To that end, one of our institutional learning outcomes is that our students will come to know the historical and theological content of the Bible. To accomplish this outcome, the Bible remains at the center of our curriculum. OCC makes it our priority to teach the content of Scripture as well as sound principles for studying and applying Scripture. An important aspect of becoming grounded in Scripture is learning theological concepts. This booklet is a summary of the various theological terms that you will learn during your time as a student at Ozark. As you make your way through our curriculum, these terms will be explained and analyzed in various courses. This booklet will be a helpful resource and guide for your theological study. Chad Ragsdale OCC Academic Dean

Anthropology the study of humanity; theologically, humanity as understood within the framework of creation, fall, and redemption

Apocalyptic a literary genre that discloses a heavenly, eschatological perspective on the events of human history (from a Greek word meaning “unveiling” or “revelation”)

Apologetics the reasoned defense of the Christian faith

Arianism the belief that Jesus was God’s first creation, thus denying his full equality with God the Father

Ascension the belief that Jesus returned to the Father’s right hand after his resurrection, where he is exalted and intercedes for his people

Atheism the belief that there is no God or gods

Christology the study of the person and work of Christ

Complementarianism the view that men and women are equal in value and have distinct but complementary roles, with men serving as primary leaders in marriage, family, and the church

Cosmology the study of the origin, nature, and purpose of the universe

Covenant an agreement in which two parties become obligated toward one another in certain ways, often referring to God’s promises to his people

Diaspora the dispersion of a people from their homeland, typically associated with Jews living outside the land of Israel

Dispensationalism a theological framework popularized by the Scofield Reference Bible which views God as working distinctly during different time periods of history, associated with ideas such as the rapture, Christ’s literal thousand-year reign, and the re-establishment of Israel as a nation

Doctrine a term referring in general to what the church believes and teaches, and specifically to summary statements of scriptural teaching on a particular topic

Documentary Hypothesis the theory that suggests the Pentateuch is a composition from Yahwist (J), Elohist (E), Deuteronomist (D) and Priestly (P) sources, instead of being compiled and written primarily by Moses

Egalitarianism the view that men and women are equal not only in value but also as relates to roles in marriage, family, and church leadership

Eisegesis reading meaning into a text

Evangelicalism a transdenominational movement within Protestantism that emphasizes the authority of Scripture, the exclusivity of Christ’s saving work on the cross, salvation by grace through faith, and the church’s call to evangelize the lost and serve the needy

Exegesis drawing meaning out of a text

F Faith taking God at his word, such that one believes what God reveals and obeys what God commands

Glossolalia speech in a language unknown to the speaker, whether another human language or ecstatic speech not identifiable with any human language (i.e. speaking in tongues)

Grace favorable disposition, often better than what is deserved

H Hamartiology the study of the nature and consequences of sin

Heaven(s) the area above the physical earth, often associated in Scripture with the realm of God; often used today in reference to the eternal destination of God’s people

Hell the realm of eternal punishment for all who reject God

Hermeneutics the theory and methods of interpreting texts

Heterodoxy belief or teaching that differs from historic Christian doctrine

Higher Criticism the study of the literary methods and sources behind a text, especially as applied to biblical writings (e.g. Source, Form, Redaction, Rhetorical)

Holiness God’s absolute perfection, or the state of created things being set apart for his service

Immanence the belief that God is present in, close to, and involved with creation

Immutability the belief that God’s nature is unchanging

Impassibility the belief that God cannot be overcome by external circumstances, particularly the experience of suffering and its effects

Imputed Righteousness the transference of Christ’s righteousness (i.e. his legal status before God) to those who believe in him

K Kerygma the gospel message as preached by the apostles (from the Greek word for &quot;proclamation&quot;)

Kingdom the reign of God, specifically as proclaimed and inaugurated by Jesus Christ

M Marcionism a movement following the teachings of Marcion, who viewed the God of the Old Testament as incompatible with the God revealed in Jesus Christ

Missiology the study of the mission of the church, typically with specific reference to cross-cultural engagement

Modalism a heresy that views the Father, Son, and Spirit as three manifestations or modes of the one God without seeing them as distinct and coexistent persons within the Trinity (also known as Sabellianism)

Monotheism belief in only one God

O Omnipotence the ability to do whatever one wills

Omnipresence the quality of being present everywhere simultaneously

Omniscience the state of knowing all things

Pneumatology study of the person and work of the Holy Spirit

Predestination the belief that God’s plan for salvation in Christ was set before the world began; in Calvinism it comes to mean that God has predetermined the eternal state of all people

Redemption Christ’s work of liberating believers from bondage to sin

Regeneration Christ’s work of bringing believers from death to life

Revelation God’s disclosure of his nature, character, and purposes

Righteousness the quality of meeting an appropriate standard; of God, conformity to his own perfection; of people, either legal status or the moral quality of living up to God’s command

Satan the spiritual adversary of God and his people

Septuagint (LXX) the earliest known Greek translation of the Old Testament (from a Latin word meaning “Seventy,” named after the approximate number of scribes believed to have begun its production)

Soteriology the study of salvation

Synoptic Gospels the Gospels of Matthew, Mark, and Luke, which bear certain similarities not shared by the Gospel of John (from a Greek phrase meaning “seen together”)

Theistic Proofs a set of arguments for the existence of God

Transubstantiation the view that the bread and wine of Communion transform into Christ’s body and blood at consecration, even while retaining their natural characteristics

Trinity the belief that God eternally exists as one being in three distinguishable but inseparable persons: Father, Son, and Holy Spirit

U Universalism the belief that all people will eventually be saved 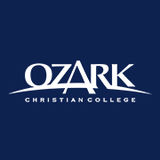