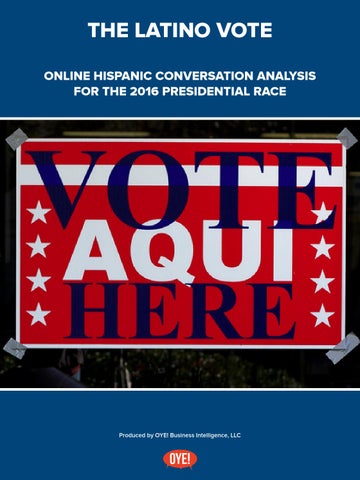 Overview: OYE! listens to consumers in their own space. Where they talk and share decisions online. Our reports deliver insight on what Spanish speaking and bilingual Hispanics have to say about your brand and your competitors. Understanding consumer attitudes towards brands, their products and their marketing efforts provides OYE!â&#x20AC;&#x2122;s clients and partners with insights that inform marketing campaigns across digital channels.

Actionable Insights: OYE! is a language neutral solution that can analyze conversation in English, Spanglish and Spanish to derive meaning from unstructured social conversation. OYE!â&#x20AC;&#x2122;s natural language processing solution is designed not only to identify Hispanics, but to also derive actionable insights for use in planning campaign strategy, content and targeting.

Understand both where consumers most favorably interact with your brand as well as where your competitors focus their efforts.

The Solution: Insights derived from social conversation by OYE! can provide key details into Hispanic consumers through their own statements about brands through online conversation. OYE! analyzes that conversation to allow brands to understand different aspects of where their most useful audience segments are. OYE! also provides insights into how to create campaigns tailored to those groups of people.

Conversation Volume OYE! Sampled a 1 week period during election announcements to discover what US based Hispanics were saying about the nominees who have formally announced. Data was gathered from Instagram and Twitter for this snapshot. For conversation across greater time periods, topics, or platforms, contact info@oyeintelligence.com. Overall Post Volume by Candidate (Twitter & Instagram) ✦ News of the Hillary Clinton

in the cycle while Paul’s candidacy is not a popular topic among Hispanics.

Hillary Clinton’s conversation volume was supported in part by a hashtag promoted from the Cruz campaign, #readyforhillary. That hashtag became a slogan for Clinton supporters and drove more positive conversation for Clinton than Cruz.

Ted Cruz mentions were driven primarily on Twitter and were largely done by organizations either for or against the candidate. The campaign has a mixed social strategy that doesn’t resonate with Hispanics.

Marco Rubio is a polarizing candidate among Hispanics, delivering strong volume across social channels in his home state of Florida, but less so outside the state.

Rand Paul struggles to get Hispanics excited and most of the news about his announcement was driven by Twitter users who shared the news either in a negative or neutral way.

Language Use & Gender Hispanics tend to engage with brands, organizations and personalities in the language they use, however, for political figures, users frequently share opinions and viewpoints of their own in Spanish language.

English is the primary language of choice on the topic of presidential candidates among Hispanics. Spanish language use is mostly generated from Twitter.

The Cruz campaign relies heavily on organizations to spread the word about the campaign on social media, failing to deliver organic conversation as seen with the Clinton and Rubio campaigns. Rand Paul sees the strongest engagement from the male audience.

Geolocation & Sentiment Conversation was widespread throughout the US, but most prominently in heavily concentrated Hispanic areas such as Miami and Los Angeles. â&#x153;Ś Surprisingly, midwest conversation among Hispanics was not substantial in the early election conversation.

Negative High negative sentiment is not overly surprising for a polarizing topic such as political candidates. Neutral sentiment was mostly delivered via retweets of content from the campaigns.

Rubio is the most polarizing candidate, with the heaviest amount of negative sentiment related to his policies. Clinton enjoys the strongest positive sentiment bolstered in part by strong user generated support in response to the Cruz campaigns #readyforhillary tactic. Cruz related content from organizations was widely shared and drove neutral sentiment, not masking the fact that heâ&#x20AC;&#x2122;s not a popular candidate among Hispanics on social media.

Hispanic Influencer Sample These influencers organically engaged in the conversation on social media during the campaign announcements. 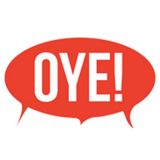