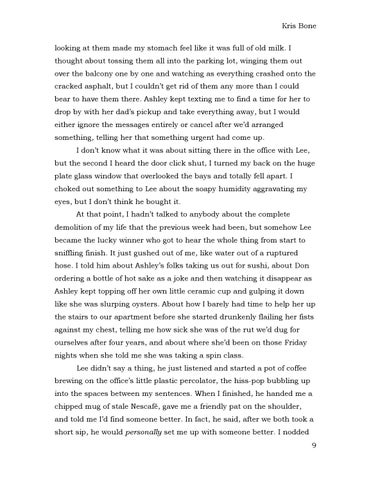 Kris Bone looking at them made my stomach feel like it was full of old milk. I thought about tossing them all into the parking lot, winging them out over the balcony one by one and watching as everything crashed onto the cracked asphalt, but I couldn’t get rid of them any more than I could bear to have them there. Ashley kept texting me to find a time for her to drop by with her dad’s pickup and take everything away, but I would either ignore the messages entirely or cancel after we’d arranged something, telling her that something urgent had come up. I don’t know what it was about sitting there in the office with Lee, but the second I heard the door click shut, I turned my back on the huge plate glass window that overlooked the bays and totally fell apart. I choked out something to Lee about the soapy humidity aggravating my eyes, but I don’t think he bought it. At that point, I hadn’t talked to anybody about the complete demolition of my life that the previous week had been, but somehow Lee became the lucky winner who got to hear the whole thing from start to sniffling finish. It just gushed out of me, like water out of a ruptured hose. I told him about Ashley’s folks taking us out for sushi, about Don ordering a bottle of hot sake as a joke and then watching it disappear as Ashley kept topping off her own little ceramic cup and gulping it down like she was slurping oysters. About how I barely had time to help her up the stairs to our apartment before she started drunkenly flailing her fists against my chest, telling me how sick she was of the rut we’d dug for ourselves after four years, and about where she’d been on those Friday nights when she told me she was taking a spin class. Lee didn’t say a thing, he just listened and started a pot of coffee brewing on the office’s little plastic percolator, the hiss-pop bubbling up into the spaces between my sentences. When I finished, he handed me a chipped mug of stale Nescafé, gave me a friendly pat on the shoulder, and told me I’d find someone better. In fact, he said, after we both took a short sip, he would personally set me up with someone better. I nodded 9 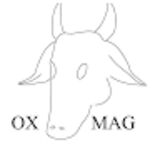