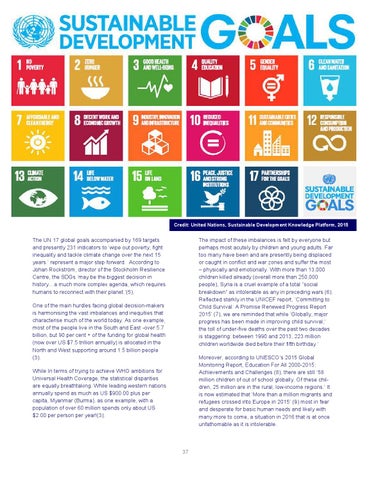 The UN 17 global goals accompanied by 169 targets and presently 231 indicators to ‘wipe out poverty, fight inequality and tackle climate change over the next 15 years.’ represent a major step forward. According to Johan Rockström, director of the Stockholm Resilience Centre, the SDGs ‘may be the biggest decision in history…a much more complex agenda, which requires humans to reconnect with their planet.’(5).

The impact of these imbalances is felt by everyone but perhaps most acutely by children and young adults. Far too many have been and are presently being displaced or caught in conflict and war zones and suffer the most – physically and emotionally. With more than 13,000 children killed already (overall more than 250,000 people), Syria is a cruel example of a total “social breakdown” as intolerable as any in preceding wars (6). Reflected starkly in the UNICEF report, ‘Committing to Child Survival: A Promise Renewed Progress Report 2015’ (7), we are reminded that while ‘Globally, major progress has been made in improving child survival,’ the toll of under-five deaths over the past two decades is staggering: between 1990 and 2013, 223 million children worldwide died before their fifth birthday.’

One of the main hurdles facing global decision-makers is harmonising the vast imbalances and inequities that characterise much of the world today. As one example, most of the people live in the South and East -over 5.7 billion, but 90 per cent + of the funding for global health (now over US $7.5 trillion annually) is allocated in the North and West supporting around 1.5 billion people (3).

Moreover, according to UNESCO’s 2015 Global Monitoring Report, Education For All 2000-2015: Achievements and Challenges (8), there are still ‘58 million children of out of school globally. Of these children, 25 million are in the rural, low-income regions.’ It is now estimated that ‘More than a million migrants and refugees crossed into Europe in 2015’ (9) most in fear and desperate for basic human needs and likely with many more to come, a situation in 2016 that is at once unfathomable as it is intolerable.

While In terms of trying to achieve WHO ambitions for Universal Health Coverage, the statistical disparities are equally breathtaking. While leading western nations annually spend as much as US $900.00 plus per capita, Myanmar (Burma), as one example, with a population of over 60 million spends only about US $2.00 per person per year!(3). 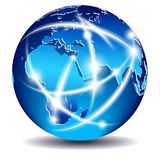