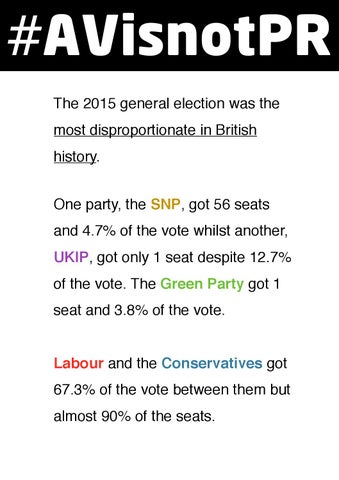 #AVisnotPR The 2015 general election was the most disproportionate in British history. One party, the SNP, got 56 seats and 4.7% of the vote whilst another, UKIP, got only 1 seat despite 12.7% of the vote. The Green Party got 1 seat and 3.8% of the vote.

Labour and the Conservatives got 67.3% of the vote between them but

After the election, thousands of people came together to demand electoral reform and a fairer voting system.

Many contacted their MPs to ask them to support electoral reform and find out where they stand.

MPs have a responsibility to reply to constituents, but some of their replies were not very satisfyingâ&#x20AC;Ś

Most of them said this: “The British electorate overwhelmingly voted to retain FPTP in 2011 and I believe this was the right decision.”

We think this is inaccurate and misleading. Here’s why:

The British electorate DID NOT vote to retain FPTP.

In 2011, the British electorate were given a choice between AV (Alternative Vote) and FPTP (our current system).

They voted not to adopt AV. This was not an endorsement of FPTP.

AV IS NOT proportional representation.

The Alternative Vote system is in some cases LESS proportional than FPTP and does not improve the representation of smaller parties. Election results under different systems according to the ERS 400

#AVisnotPR We want to show MPs that the British electorate DID NOT overwhelmingly voted to retain FPTP in 2011.

WHAT CAN I DO?

Please get involved in our social media campaign, using #AVisnotPR and write to your MP. 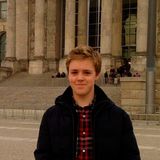 Short explanation of the #AVisnotPR campaign and why MPs are wrong when they say that in 2011 the British electorate voted to support FPTP.

Short explanation of the #AVisnotPR campaign and why MPs are wrong when they say that in 2011 the British electorate voted to support FPTP.