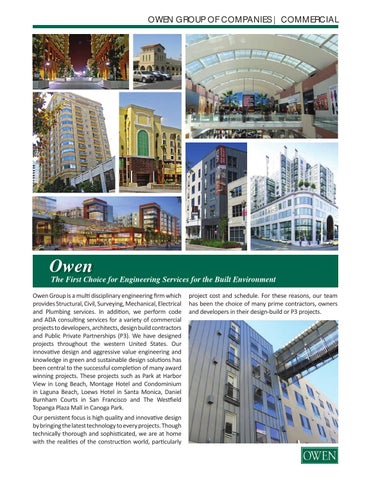 Owen The First Choice for Engineering Services for the Built Environment Owen Group is a multi disciplinary engineering firm which provides Structural, Civil, Surveying, Mechanical, Electrical and Plumbing services. In addition, we perform code and ADA consulting services for a variety of commercial projects to developers, architects, design build contractors and Public Private Partnerships (P3). We have designed projects throughout the western United States. Our innovative design and aggressive value engineering and knowledge in green and sustainable design solutions has been central to the successful completion of many award winning projects. These projects such as Park at Harbor View in Long Beach, Montage Hotel and Condominium in Laguna Beach, Loews Hotel in Santa Monica, Daniel Burnham Courts in San Francisco and The Westfield Topanga Plaza Mall in Canoga Park. Our persistent focus is high quality and innovative design by bringing the latest technology to every projects. Though technically thorough and sophisticated, we are at home with the realities of the construction world, particularly

project cost and schedule. For these reasons, our team has been the choice of many prime contractors, owners and developers in their design-build or P3 projects.

Who we have worked for Mixed Use/Residential Marabella Condominiums South San Francisco, CA

Owen was contracted by KTGY Architects to provide full structural engineering for the Sunroad Centrum Apartments â&#x20AC;&#x201C; Phases 4 & 5 project located at Spectrum Center Boulevard in the City of San Diego, California. The project site consists of an approximately 5-acre rectangular parcel. The Sunroad Centrum, is a mixeduse project which includes subterranean parking, retail spaces, townhouses, apartments, leasing offices, and related amenities. The project includes a total of 506,210 square feet of gross area for residential and 483,675 square feet of townhomes. Building No. 4 includes 309 residential units and 56 townhomes. Building No. 5 consists of 241 units and 45 townhomes (total of 550 units and 101 townhomes altogether. The projects include total of 1,079 parking stalls. The parking includes two levels above the grade and one subterranean. A bridge deck connects the two buildings together. Total estimated construction cost is 80 million dollars.

Owen provided a comprehensive array of engineering design services for this large condominium project located in South San Francisco. The project is a podium-type structure and consists of 350 units in six buildings, with one- and two-bedroom unit mix on a four-story Type V wood structure, over a two-story Type III parking structure. The parking structure is post-tensioned slab construction.

This $200 million mixed-use hotel and garden plaza complex is comprised of six residential buildings, ranging in height from 6 to 11 stories each, two 26 story condominium towers, and one 25 story hotel tower with large garden and walkway retail plaza.

The Long Beach West Gateway is a full city-block large building complex. The project is a mixed-use complex, including 354 residential units, parking garages, and retail spaces. It includes two levels of parking garage, one being subterranean, and four-level residential over a podium.

The entire site is situated over a three-story parking garage of approximately 324,000 square feet totaling 3,200 spaces. The project overlooks Queensbay in the Long Beach harbor. This project is one of the largest mixed-use projects in southern California and has substantial site constraints, including ground water, existing historical buildings on and adjacent to the site, as well as being close to a major active fault system.

Owen performed structural services on the Masonic Home for Adults in Union City, CA. Nonprofit Masonic Homes spent more than $48 million to completely renovate and upgrade five buildings at its Union City facility. The result is a campus that combines the charm and grace of brick facades with convenient, seniorfriendly gathering spaces and larger rooms. Though each building on the Masonic Home campus has its own character, many design elements are common to the renovation of each of the five structures. These included seismic and Americans with Disabilities Act (ADA)--compliant upgrades; new mechanical and electrical infrastructure; wider, brightly lit hallways; larger residential units (which increased in size from 275 to 475 square feet on average); contemporary trellises and entry canopies; and light and airy dining and activity rooms.

The Lofts at Promenade - Long Beach

The project includes two mixed-use buildings, interconnected with a pedestrian bridge on higher levels. Together, the buildings provide about 11,000 square foot of retail, about 95,000 square foot of residential space (96 units), and 390 parking stalls. The first building is a mixed-use residential and retail complex, with the ground level housing, retail, and parking garage. The residential units are arranged in four levels. The structural system includes cast-in-place reinforced as well as post-tensioned concrete for retail and garages and wood structure at the residential portion. The second building is a seven-story structure that primarily provides parking spaces and amenities at the roof level. The front portion houses 3,000 square feet of retail area at ground level and a limited number of residential units at the next three levels above it.

The Plaza-Irvine Ownerâ&#x20AC;&#x2122;s Association awarded a contract to Owen for seismic analysis and design of these high-rise residential buildings using dualmoment shear walls frame concrete structure. The building is a residential complex building built in 2007 and includes two separate towers and a connecting plaza and subterranean parking garage. The plaza and parking levels includes structures that are seismically separated.

Owen provided full service design and engineering of this 18-story tower project, which consists of 13 stories of residential condominiums on top of a five-level parking structure, located in the heart of San Francisco. The first and second floors are shops and offices and the remaining 13 floors are residential units, consisting of one- to three-bedroom condominium/apartments, including two penthouses on the top level. The lateral-force resisting system of the structure consists of concrete shear walls tube core and ductile concrete moment frames on the perimeter in one direction only. The vertical load carrying system consists of posttensioned concrete slabs and beams, and the foundation system consists of concrete cast-in-place mat footing.

Owen prepared the bridging document for Ocean Villas residential community. The project was constructed of Two 24 story poured in place concrete construction and features a finely articulated and detailed contemporary stucco facade. The design features articulated horizontal and vertical relief, pediments and details for interest and urban scale in a contemporary Art Deco style. Colors are light and soft to complement the California coastal environment. Each residential tower has itâ&#x20AC;&#x2122;s own unique color identity. The overall community environment is enhanced by the abundance of street trees and landscaped areas planned for the community. The luxury residences will range in size from 650 to over 2,800 square feet.

Tradewind is located in the heart of downtown Oceanside, one of the most beautiful and up-andcoming coastal cities in California. Situated in the heart of the redevelopment The sharp and exciting designs offers, 10 luxury unit condominium homes and 2 condominium office/retail space. The homes range in size from 1300 to 3000 square feet of comfortable living space.

This 273,000 square foot, 14 story, 372 suite, full -service high-rise hotel includes an atrium, meeting and conference space, lounge and restaurant facility, gift shop, deli, and back-of house functions and spaces. Supporting the hotel is a three-level, 350 space, subterranean parking structure. The project is located in an area with a variety of office, retail, and serviceoriented businesses. Buildings in the area range from low-rise office and commercial uses to mid to high rise office buildings and hotels.

Who we have worked for Hospitality Embassy Suites Hotel Brea, CA

LUXURY LANDMARK HOTEL The company’s economical designs are the backbone of many of its medium- to high-rise structures, such as the 570,000 square foot Santa Monica Beach Hotel in Southern California. It has 340 guestrooms with views, including 19 suites, spa treatment including pool, dry sauna and Jacuzzi. OWEN’s value engineering design of this hotel saved the owner $2 million in construction costs. An alternative foundation system and an OWENmodeled shear wall layout provided a very strong frame for Santa Monica’s earthquake-prone location.

This is the first major hotel and retail development in the China Town strip of the Los Angeles area. A $50 million, five-star, 222 room hotel, including 27 suites with two restaurants, a banquet room, ballroom, and a two-story retail wing. The project also involves a concrete bridge wash over the San Gabriel River channel for a parking structure. The Hilton also has the largest catering and private dining facilities in the area, with a 12,524 square foot ballroom and eight private dining rooms (breakout rooms) which can be divided into twelve rooms. A rooftop garden provides space for casual refreshments, receptions or spectacular wedding ceremonies.

Owen provided all staff resources to oversee the project from design through construction completion. This $25 million project is led by City of San Bernardino Redevelopment Department in association with SANBAG and Metrolink. The terminal provides service for one Amtrak and three Metrolink lines.

Owen provided parking consulting and Engineering Design Services as part of the design/build team for this project. City of Long Beach Airport

Owen is the mechanical, electrical and structural engineer of record for this new 1,900 car, $58 million, five-level parking structure at the Long Beach Airport. Owen won this 1.2 million sf parking structure as part of the ARB team on a nationwide design/build competition for what was to become one of the largest parking structures in California. Originally planned as a 4,000 car facility, the as-built structure has a second phase that will add the additional 1,110 cars in the future.

The structure is designed to comply with S-4 occupancy, as an open-air structure per the LA City Building Code. This Type-1 Construction Project utilizes poured-inplace concrete columns, and poured-in-place concrete post-tensioned beams and slabs. The first floor is design for bus transit and upper floors for vehicle parking.

Owen was hired by USC to provide structural engineering services as part of the design/build team. The project involved a comparative cost analysis which determined that cast-in-place post-tensioned concrete was the most economical and practical alternative.

This is a two-story steel frame building with one level This new professional office building consists of two of concrete parking garage below. Metal decks and three-story class “A” office buildings. Both buildings steel frames are used to carry the vertical loads. Steel chevron braces are used to resist the lateral forces. total 150,000 square feet. The construction of this concrete office building was performed by McCarthy Construction. The building design features an elegant exterior of structural concrete. The structural system consists of an exterior and interior cast-in-place concrete moment frame and post-tensioned concrete flat-plate floor slab. The foundation system consists of pad foundations for the above buildings.

The one-level subterranean parking is constructed with masonry walls on the perimeter and post-tensioned concrete slab on top. It has a conventional pad, and continuous footing is used to support columns and walls.

Owen is providing MEP engineering services for the new design of two 60,000 square ft, low-rise office buildings with two levels of subterranean parking. Total building area is 113,463 square feet. Total subterranean parking area is 122,295 sf. The buildings will be “shell-and-core” at this time. The project is located in creative office area submarket of Culver City just minutes from the newly renovated downtown area.

The Westfield Topanga mall is one of the largest in the United States. This project consists of over 1 million square feet of upscale expansion. There are 125 tenants on two floors with the new expansion adding 100 more. The $2 billion dollar project with a $500,000 facelift provided upscale dining options with cafe-style dining terraces and full-service concierge and acres of covered parking. Also included is a Westfield Play Town for children, a family lounge and an indoor carousel. The roof top of the main mall contain two level of parking structure. Additional Owen designed a 6 story 4000 install parking structure at the entrance of the mall.

Owen provided full design and engineering services for the San Diego State University Foundation mixeduse development project is approximately 11 acres consisting of 270,000 square feet of retail, cinema, restaurant, entertainment, office tower space, and subterranean parking, with 375 units of student housing located on the top level. The estimated cost is $185 million. The Paseo is a project located in the College Community Redevelopment Project area and designated by the City of San Diego as one of five Smart Growth City of Villages.