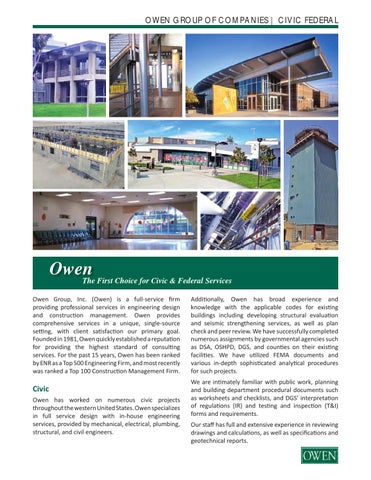 Owen Group, Inc. (Owen) is a full-service firm providing professional services in engineering design and construction management. Owen provides comprehensive services in a unique, single-source setting, with client satisfaction our primary goal. Founded in 1981, Owen quickly established a reputation for providing the highest standard of consulting services. For the past 15 years, Owen has been ranked by ENR as a Top 500 Engineering Firm, and most recently was ranked a Top 100 Construction Management Firm.

Additionally, Owen has broad experience and knowledge with the applicable codes for existing buildings including developing structural evaluation and seismic strengthening services, as well as plan check and peer review. We have successfully completed numerous assignments by governmental agencies such as DSA, OSHPD, DGS, and counties on their existing facilities. We have utilized FEMA documents and various in-depth sophisticated analytical procedures for such projects. We are intimately familiar with public work, planning and building department procedural documents such as worksheets and checklists, and DGSâ&#x20AC;&#x2122; interpretation of regulations (IR) and testing and inspection (T&I) forms and requirements. Our staff has full and extensive experience in reviewing drawings and calculations, as well as specifications and geotechnical reports.

Federal / Department of Veteran’s Affairs Owen has prior experience working with the Department of Veterans Affairs and has an excellent track record providing services on VA projects. Owen has managed and designed VA projects and hospitals throughout the western United States, and has specific knowledge of local and state code compliance issues. Owen understands that each healthcare project is comprised of a wide range of services, including highly complicated structural, mechanical, electrical, and telecommunications systems, which require specialized knowledge and expertise. We also have designed many Green Buildings and provided services on a multitude of sustainable design projects. Owen is familiar with VA design guides for planning many different departments and clinics, design manuals of technical requirements, equipment lists, master specifications, room finishes, space planning criteria, and standard details.

Owen has an impressive and extensive work history with the Department of Defense. Our Department of Defense work includes numerous projects for the US Navy, Marines, Air Force and Army Corps of Engineers. We have provided structural, civil, and MEP engineering services, as well as QA/QC services for many military installations. Our structural engineering experience includes blast design, antiterrorism force protection, pushover analysis, linear/ non-linear computer analysis, foundation and column grid and lateral load carrying systems.

Owen teamed with Carrier Johnson Architects to provide engineering services on the City of Irvine’s William Woollett, Jr. Aquatics Center. This was a significant project to upgrade the City’s Aquatics Center, and to construct a new building for aquatic offices and support facilities. This project also entailed the three, 25-yardwide pools – a 50-meter competition pool, a 50-meter multipurpose pool, and a 25-meter training pool. The new Aquatic Center is used both by the public and by the adjacent high school for swimming practice and competition.

Owen provided design and construction assistance services for the City of Carson to implement 175-kW of rooftop solar photovoltaic panels that provides solargenerated renewable electricity to the community center and to other City buildings. This substantially reduces the City’s utility bills and preserves City funds for other needed projects.

Experience Where It Counts City

Owen performed seismic rehabilitation and assessments of the current conditions of the historic structure, and redesigned the existing building electrical distribution system.

Owen teamed with WLC Architects on the new construction of the Valley Recruit Training Center and Fire Station No. 81. Our role was to develop design documents and provide assistance during construction The upgrades bring it up to a more efficient operating for the HVAC, plumbing, electrical, fire alarm, computer standard while keeping the appearance of the original networking, safety systems, and fuel storage and dispensing system. 1920â&#x20AC;&#x2122;s and 1930â&#x20AC;&#x2122;s status as a historical structure.

Owen is the Engineer of Record on the new construction of the Multipurpose Room and an Apparatus Storage Building at Fire Station No. 89. Our role was to develop design documents and provide assistance during construction for the HVAC, plumbing, electrical, fire alarm, computer networking, and safety systems. The building consists of a Multipurpose Room for training and assemblies, as well as an Apparatus Storage Area to garage fire trucks and other equipment. There are also a lobby, a mezzanine, restrooms, a pit area, and other small ancillary rooms.

Owen is teamed with Carrier Johnson architects to provide engineering services for the overall renovation of the Sheriff’s Headquarters Building at 550 N. Flower Street in Santa Ana. This project involves remodel and modernization of the existing 61,323 square foot building and its systems. The main objectives of the project are to modernize and improve the working flow of the facility, accommodate increased staff, comply with new codes, and replace worn out building infrastructure. One of the challenges is to accomplish this work while the facility remains fully operational and not to impair its public safety activities. Owen is providing HVAC system upgrades, new computerized and automated controls, plumbing ADAcompliance, an emergency electrical system upgrade, a fire alarm system upgrade, an expanded security system, and telecommunications/teledata networking.

Owen was selected by the County of San Diego to perform an independent structural seismic assessment of the existing Central Courthouse Facilities, situated in downtown San Diego per the requirement of Senate Bill 1732 (Escutia), also known as Trial Court Facilities Act of 2002. The facility includes five separate buildings ranging from four to seven stories tall. The typical structural system is a combination of steel frames and concrete/precast or prestressed walls/panels.

Owen has been selected to provide Plan Review services for Court Construction projects throughout California on an as-needed basis by the Administrative Office of the Courts (AOC). As part of the on-call contract, Owen provided plan review services for the $300 million San Bernardino Courts Building and the new $400 million San Diego Courthouse.

HVAC design under this project will include re-configuration of duct work and diffusers in the area. Design of toilet room exhaust ventilation is also included. Plumbing design will be provided for two rest rooms. Fire sprinkler piping will be done by others on a design/ build basis. However, we will provide a performance specification as a basis for this design/build work by others. Electrical design will include electrical power and lighting for the area. It will also include conduits for data, telephone, and sound systems.

Design/Build team of Amoroso-Owen was contracted by the Los Angeles County Metropolitan Transportation Authority (Metro) for the Metro Blue Line project involving refurbishments of the entire group of 21 Metro Blue Line stations. Owen Group, as a design partner to Amoroso, is providing full design and ADA accessibility/compliance for all the 21 Blue Line stations and rail platforms. These refurbishments will upgrade the 20+ year old stations with a renewed look, as well as sustainable technology.

Owen provided structural plan review services that included full plan review and back check review of drawings and specifications for two separate buildings, a multi-purpose building that is s-shaped in plan with two towers. It is a 2-story steel (RBS) frame system with metal cellular deck. The lateral load-resisting system is complex and includes a combination of several systems such as SMRF, chevron braces, and CMU shear/retaining walls.

Owen is providing engineering, design services and plan review for a large renovation project on an existing 256bed, in-patient mental health treatment facility. Owen is reviewing plans and specifications at Patton State Hospital for compliance with applicable codes, including ADA and Title 24 with emphasis related to Office of Statewide Health Planning Development (OSHPD) requirements. The building is approximately 133,000 gross square feet and it is a cast-in-place concrete structure with a basement and 3 stories.

Owen was retained by the State of California Department of General Services (DGS) â&#x20AC;&#x201C; Project Management Branch (PMB) to provide LEED Commissioning Services for the new, 15,000 square foot, DMV Facility in San Ysidro, California. This commissioning effort was successfully completed as part of the LEED Gold certification that the facility received.

Owen provided plan review for a new skilled nursing facility with a separate central utility building and site development including parking, landscaped plazas, and courtyards, and a new access road with drop-off at the north side of the site. The building will be home to 396 California state veterans who meet the care criteria for admittance. The facility will be designed and built in accordance with current OSHPD requirements.

In collaboration with ALMCO Limited, Owen provided engineering services for the new maintenance building in Salman Pak, Iraq. The design build project is a vehicle maintenance complex, which consists of a maintenance garage, warehouses, barracks, ablution/laundry facilities, power house, and a fuel station.

US Marine Corps Base at Camp Pendleton, CA

Owen was selected as to perform A/E on-call services for various facility types at the Marine Corps Base at Camp Pendleton. Services included investigations, studies, evaluations, and reports, including the design and preparation of plans and specifications for repairs and renovation work.

Owen was selected to perform full-service engineering services for the design-build construction of a new visiting quarterâ&#x20AC;&#x2122;s facility at Travis Air Force Base in Fairfield, CA. The Travis Visiting Quarters is a four-story U-shaped building divided into two wings and a center lobby, administration offices, and maintenance rooms. The 350-room, Visiting Quarters includes site improvement, utility services and all other required improvements. The U-shaped plan had structural plan irregularities; therefore the design utilized the dynamic analysis procedure of the code to arrive with base shear designing the lateral systems. An introduction to Owen Group's experience and qualifications related to Civic and Federal work.

An introduction to Owen Group's experience and qualifications related to Civic and Federal work.