Owela - The Future of Work 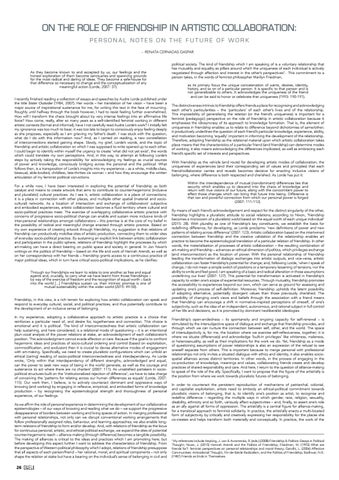 ON THE ROLE OF FRIENDSHIP IN ARTISTIC COLLABORATION: PERSONAL NOTES ON THE FUTURE OF WORK - RENATA CERNADAS GASPAR

political society. The kind of friendship which I am speaking of is a voluntary relationship that has mutuality and equality as pillars around which the uniqueness of each individual is actively negotiated through affection and interest in the other’s perspectives1. This commitment to a person takes, in the words of feminist philosopher Marilyn Friedman, as its primary focus the unique concatenation of wants, desires, identity, history, and so on of a particular person. It is specific to that person and is not generalizable to others. It acknowledges the uniqueness of the friend and can be said to honor or celebrate that uniqueness (1993: 190-191). The distinctiveness intrinsic to friendship offers friends a place for recognising and acknowledging each other’s particularities – the ‘particulars’ of each other’s lives and of the relationship. This impossibility of generalising the relation (or the friend’s uniqueness) is important for a feminist (pedagogic) perspective on the role of friendship in artistic collaboration because it emphasises the idiosyncrasy of its approach to knowledge formation. That is, the element of uniqueness in friendship enables us to relate to difference beyond dichotomies of same/other; it productively underlines the question of each friend’s particular knowledge, experience, ability, and motivation becoming ‘equally’ important in informing the development of the relationship. Therefore, adopting friendship as the relational material upon which artistic collaboration takes place means that the characteristics of a particular friend (and friendship) can determine modes of working; it also means acknowledging the differences implicated, as well as embracing each friend’s specific set of interests and perspectives. With friendship as the vehicle (and route) for developing artistic modes of collaboration, the uniqueness of experiences (and their corresponding set of values and principles) that each friend/collaborator carries and reveals becomes decisive for enacting inclusive visions of belonging, where difference is both respected and cherished. As Lorde has put it: Within the interdependence of mutual (nondominant) differences lies that security which enables us to descend into the chaos of knowledge and return with true visions of our future, along with the concomitant power to effect those changes which can bring that future into being. Difference is that raw and powerful connection from which our personal power is forged (2007: 111-112). By means of each friend’s acknowledgement and respect for the distinct singularity of the other, friendship highlights a pluralistic attitude to social relations; according to Nixon, ‘friendship becomes a microcosm of a pluralistic world based on the equal worth of each unique individual’ (2015: 28). With plurality as one of friendship’s key constituents, we establish the basis for redefining difference, for developing, as Lorde proclaims: ‘new definitions of power and new patterns of relating across difference’ (2007: 123). Artistic collaboration based on the intertwined connection between friendship and the creative validation of the relationship enables art practice to become the epistemological translation of a particular relation of friendship. In other words, the materialisation of processes of artistic collaboration – the resulting combination of art-making and friendship – advances an ethical dimension of politics, which privileges exchange (and interconnection) as the location of power. With the personal relationship of friendship leading the transformation of dialogic exchanges into artistic outputs, and vice-versa, artistic collaboration can foster friendship’s potential for change; and, following Lorde, ‘when I speak of change, I do not mean a simple switch of positions or a temporary lessening of tensions, nor the ability to smile and feel good. I am speaking of a basic and radical alteration in those assumptions underlining our lives’ (2007: 127). This potential for transformation is activated in friendship’s capacity to widen one’s scope of experiential resources. Through mutuality, friendship promotes the accessibility to experiences beyond our own, which can serve as ground for assessing and updating one’s process of self-definition. Moreover, friendship upholds the latent possibility of adopting alternative, potentially divergent values than those previously cherished. The possibility of changing one’s views and beliefs through the association with a friend means that friendship can encourage a shift in normative-inspired perceptions of oneself, of one’s subjectivity, such as the idea of an independent, autonomous, and rational subject in full control of her life and decisions, as it is promoted by dominant neoliberalist ideologies. Friendship’s open-endedness – its spontaneity and ongoing capacity for self-renewal – is stimulated by the intersubjective space of dialogue and exchange that friendship provides, and through which we can nurture the connection between self, other, and the world. The space of intersubjectivity is, for me, the location where we exercise self-reflexiveness, together; it is where we situate difference(s) and acknowledge ‘built-in privileges’ like whiteness, maleness, or heterosexuality, as well as their implications for the work we do. Yet, friendship as a mode of questioning assumptions of power relationships is also an expression of the refusal to see oneself separate from others. This is important because to merge personal with professional relationships not only invites a situated dialogue with ethics and identity, it also enables sociospatial alliances across distinct territories. In other words, in the process of engaging in the co-production of knowledge, meanings and values, collaborating friends create and develop practices of shared responsibility and care. And here, I return to the question of alliance-making to speak of the role of the ally. Specifically, I want to propose that the figure of the artist/ally is the position from where we work towards pluralistic futures of belonging. In order to counteract the persistent reproduction of mechanisms of patriarchal, colonial, and capitalist exploitation, artists need to embody an ethical-political commitment towards pluralistic visions of belonging, that is, to identify one’s position as artist, to recognise and redefine difference – regarding the multiple ways in which gender, race, religion, sexuality, disability, ethnicity and so forth, variously affect subjectivities – and, finally, to assert one’s role as an ally against all forms of oppression. The artist/ally is a central figure for alliance-making, for a translocal approach to feminist solidarity. In practice, the artist/ally enacts a multi-located form of subjectivity by critically and creatively expressing her responsibility for the places she co-creates and helps transform both materially and conceptually. In practice, the work of the

Owela - The Future of Work

Owela - The Future of Work, a publication curated to critically & creatively reflect on labour & worker struggles. This is a special and radical collection of literature, visuality & discourse around decolonial praxis. With contributions from Namibia, Germany & South Africa, 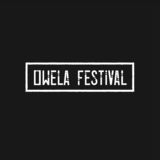