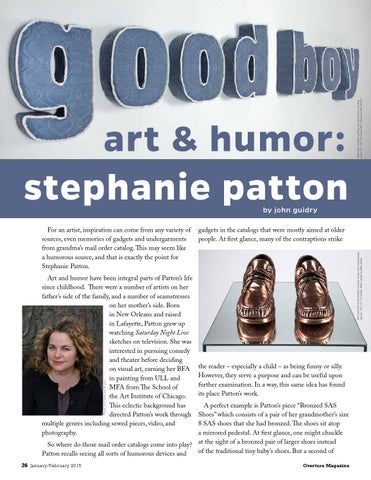 Art and humor have been integral parts of Patton’s life since childhood. There were a number of artists on her father’s side of the family, and a number of seamstresses on her mother’s side. Born in New Orleans and raised in Lafayette, Patton grew up watching Saturday Night Live sketches on television. She was interested in pursuing comedy and theater before deciding on visual art, earning her BFA in painting from ULL and MFA from The School of the Art Institute of Chicago. This eclectic background has directed Patton’s work through multiple genres including sewed pieces, video, and photography.

For an artist, inspiration can come from any variety of sources, even memories of gadgets and undergarments from grandma’s mail order catalog. This may seem like a humorous source, and that is exactly the point for Stephanie Patton.

the reader – especially a child – as being funny or silly. However, they serve a purpose and can be useful upon further examination. In a way, this same idea has found its place Patton’s work.

A perfect example is Patton’s piece “Bronzed SAS Shoes” which consists of a pair of her grandmother’s size 8 SAS shoes that she had bronzed. The shoes sit atop a mirrored pedestal. At first glance, one might chuckle So where do those mail order catalogs come into play? at the sight of a bronzed pair of larger shoes instead of the traditional tiny baby’s shoes. But a second of Patton recalls seeing all sorts of humorous devices and 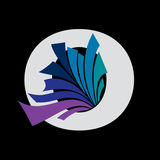 Acadiana's publication of the art's

Acadiana's publication of the art's