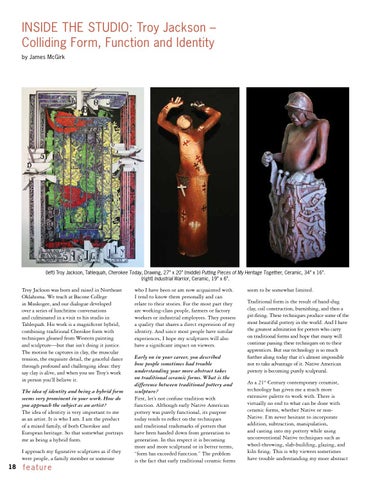 INSIDE THE STUDIO: Troy Jackson – Colliding Form, Function and Identity by James McGirk

Troy Jackson was born and raised in Northeast Oklahoma. We teach at Bacone College in Muskogee, and our dialogue developed over a series of lunchtime conversations and culminated in a visit to his studio in Tahlequah. His work is a magnificent hybrid, combining traditional Cherokee form with techniques gleaned from Western painting and sculpture—but that isn’t doing it justice. The motion he captures in clay, the muscular tension, the exquisite detail, the graceful dance through profound and challenging ideas: they say clay is alive, and when you see Troy’s work in person you’ll believe it. The idea of identity and being a hybrid form seems very prominent in your work. How do you approach the subject as an artist? The idea of identity is very important to me as an artist. It is who I am. I am the product of a mixed family, of both Cherokee and European heritage. So that somewhat portrays me as being a hybrid form. I approach my figurative sculptures as if they were people, a family member or someone

who I have been or am now acquainted with. I tend to know them personally and can relate to their stories. For the most part they are working-class people, farmers or factory workers or industrial employees. They possess a quality that shares a direct expression of my identity. And since most people have similar experiences, I hope my sculptures will also have a significant impact on viewers. Early on in your career, you described how people sometimes had trouble understanding your more abstract takes on traditional ceramic forms. What is the difference between traditional pottery and sculpture? First, let’s not confuse tradition with function. Although early Native American pottery was purely functional, its purpose today tends to reflect on the techniques and traditional trademarks of potters that have been handed down from generation to generation. In this respect it is becoming more and more sculptural or in better terms, “form has exceeded function.” The problem is the fact that early traditional ceramic forms

seem to be somewhat limited. Traditional form is the result of hand-dug clay, coil construction, burnishing, and then a pit-firing. These techniques produce some of the most beautiful pottery in the world. And I have the greatest admiration for potters who carry on traditional forms and hope that many will continue passing these techniques on to their apprentices. But our technology is so much further along today that it’s almost impossible not to take advantage of it. Native American pottery is becoming purely sculptural. As a 21st Century contemporary ceramist, technology has given me a much more extensive palette to work with. There is virtually no end to what can be done with ceramic forms, whether Native or nonNative. I’m never hesitant to incorporate addition, subtraction, manipulation, and casting into my pottery while using unconventional Native techniques such as wheel-throwing, slab-building, glazing, and kiln firing. This is why viewers sometimes have trouble understanding my more abstract

2014 May/June Art Focus Oklahoma is a bimonthly publication of the Oklahoma Visual Arts Coalition dedicated to stimulating insight into and...

2014 May/June Art Focus Oklahoma is a bimonthly publication of the Oklahoma Visual Arts Coalition dedicated to stimulating insight into and...