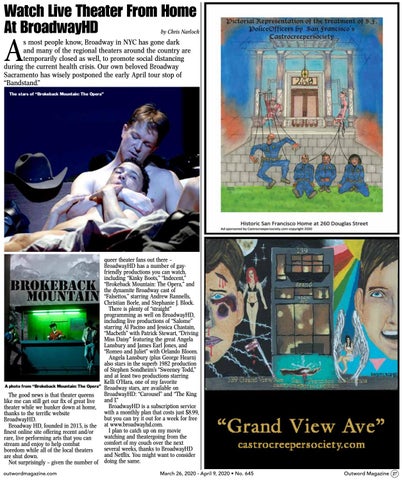 s most people know, Broadway in NYC has gone dark and many of the regional theaters around the country are temporarily closed as well, to promote social distancing during the current health crisis. Our own beloved Broadway Sacramento has wisely postponed the early April tour stop of “Bandstand.” T he stars of “Brokeback Mountain: T he Opera”

queer theater fans out there – BroadwayHD has a number of gayfriendly productions you can watch, including “Kinky Boots,” “Indecent,” “Brokeback Mountain: The Opera,” and the dynamite Broadway cast of “Falsettos,” starring Andrew Rannells, Christian Borle, and Stephanie J. Block. There is plenty of “straight” programming as well on BroadwayHD, including live productions of “Salome” starring Al Pacino and Jessica Chastain, “Macbeth” with Patrick Stewart, “Driving Miss Daisy” featuring the great Angela Lansbury and James Earl Jones, and “Romeo and Juliet” with Orlando Bloom. Angela Lansbury (plus George Hearn) also stars in the superb 1982 production of Stephen Sondheim’s “Sweeney Todd,” and at least two productions starring Kelli O’Hara, one of my favorite A photo from “Brokeback Mountain: T he Opera” Broadway stars, are available on BroadwayHD: “Carousel” and “The King The good news is that theater queens and I.” like me can still get our fix of great live BroadwayHD is a subscription service theater while we hunker down at home, with a monthly plan that costs just $8.99, thanks to the terrific website but you can try it out for a week for free BroadwayHD. Broadway HD, founded in 2013, is the at www.broadwayhd.com. I plan to catch up on my movie finest online site offering recent and/or watching and theatergoing from the rare, live performing arts that you can comfort of my couch over the next stream and enjoy to help combat several weeks, thanks to BroadwayHD boredom while all of the local theaters and Netflix. You might want to consider are shut down. Not surprisingly – given the number of doing the same. outwordmagazine.com 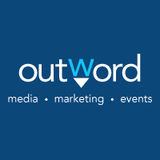