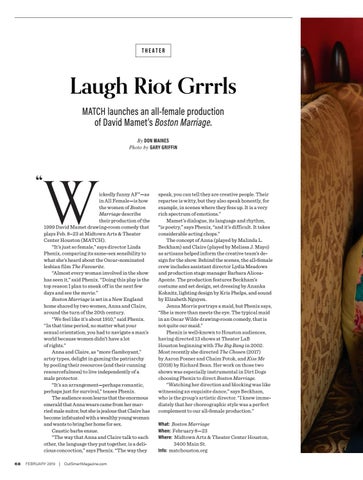 ickedly funny AF”—as in All Female—is how the women of Boston Marriage describe their production of the 1999 David Mamet drawing-room comedy that plays Feb. 8–23 at Midtown Arts & Theater Center Houston (MATCH). “It’s just so female,” says director Linda Phenix, comparing its same-sex sensibility to what she’s heard about the Oscar-nominated lesbian film The Favourite. “Almost every woman involved in the show has seen it,” said Phenix. “Doing this play is the top reason I plan to sneak off in the next few days and see the movie.” Boston Marriage is set in a New England home shared by two women, Anna and Claire, around the turn of the 20th century. “We feel like it’s about 1910,” said Phenix. “In that time period, no matter what your sexual orientation, you had to navigate a man’s world because women didn’t have a lot of rights.” Anna and Claire, as “more flamboyant,” artsy types, delight in gaming the patriarchy by pooling their resources (and their cunning resourcefulness) to live independently of a male protector. “It’s an arrangement—perhaps romantic, perhaps just for survival,” teases Phenix. The audience soon learns that the enormous emerald that Anna wears came from her married male suitor, but she is jealous that Claire has become infatuated with a wealthy young woman and wants to bring her home for sex. Caustic barbs ensue. “The way that Anna and Claire talk to each other, the language they put together, is a delicious concoction,” says Phenix. “The way they

speak, you can tell they are creative people. Their repartee is witty, but they also speak honestly, for example, in scenes where they fess up. It is a very rich spectrum of emotions.” Mamet’s dialogue, its language and rhythm, “is poetry,” says Phenix, “and it’s difficult. It takes considerable acting chops.” The concept of Anna (played by Malinda L. Beckham) and Claire (played by Melissa J. Mayo) as artisans helped inform the creative team’s design for the show. Behind the scenes, the all-female crew includes assistant director Lydia Meadows and production stage manager Barbara AliceaAponte. The production features Beckham’s costume and set design, set dressing by Ananka Kohnitz, lighting design by Kris Phelps, and sound by Elizabeth Nguyen. Jenna Morris portrays a maid, but Phenix says, “She is more than meets the eye. The typical maid in an Oscar Wilde drawing-room comedy, that is not quite our maid.” Phenix is well-known to Houston audiences, having directed 13 shows at Theater LaB Houston beginning with The Big Bang in 2002. Most recently she directed The Chosen (2017) by Aaron Posner and Chaim Potok, and Kiss Me (2018) by Richard Bean. Her work on those two shows was especially instrumental in Dirt Dogs choosing Phenix to direct Boston Marriage. “Watching her direction and blocking was like witnessing an exquisite dance,” says Beckham, who is the group’s artistic director. “I knew immediately that her choreographic style was a perfect complement to our all-female production.” What: Boston Marriage When: February 8­­—23 Where: Midtown Arts & Theater Center Houston, 3400 Main St. Info: matchouston.org 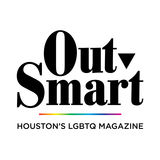