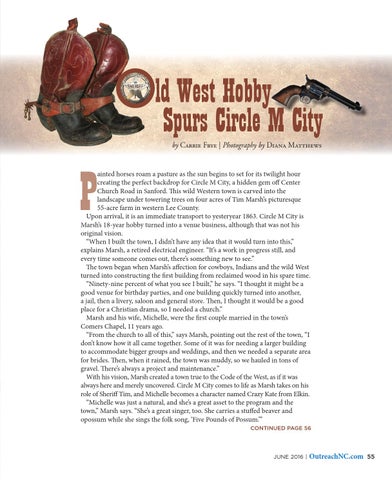 ainted horses roam a pasture as the sun begins to set for its twilight hour creating the perfect backdrop for Circle M City, a hidden gem off Center Church Road in Sanford. This wild Western town is carved into the landscape under towering trees on four acres of Tim Marsh’s picturesque 55-acre farm in western Lee County. Upon arrival, it is an immediate transport to yesteryear 1863. Circle M City is Marsh’s 18-year hobby turned into a venue business, although that was not his original vision. “When I built the town, I didn’t have any idea that it would turn into this,” explains Marsh, a retired electrical engineer. “It’s a work in progress still, and every time someone comes out, there’s something new to see.” The town began when Marsh’s affection for cowboys, Indians and the wild West turned into constructing the first building from reclaimed wood in his spare time. “Ninety-nine percent of what you see I built,” he says. “I thought it might be a good venue for birthday parties, and one building quickly turned into another, a jail, then a livery, saloon and general store. Then, I thought it would be a good place for a Christian drama, so I needed a church.” Marsh and his wife, Michelle, were the first couple married in the town’s Comers Chapel, 11 years ago. “From the church to all of this,” says Marsh, pointing out the rest of the town, “I don’t know how it all came together. Some of it was for needing a larger building to accommodate bigger groups and weddings, and then we needed a separate area for brides. Then, when it rained, the town was muddy, so we hauled in tons of gravel. There’s always a project and maintenance.” With his vision, Marsh created a town true to the Code of the West, as if it was always here and merely uncovered. Circle M City comes to life as Marsh takes on his role of Sheriff Tim, and Michelle becomes a character named Crazy Kate from Elkin. “Michelle was just a natural, and she’s a great asset to the program and the town,” Marsh says. “She’s a great singer, too. She carries a stuffed beaver and opossum while she sings the folk song, ‘Five Pounds of Possum.’” CONTINUED PAGE 56 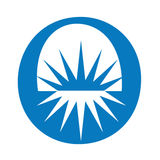