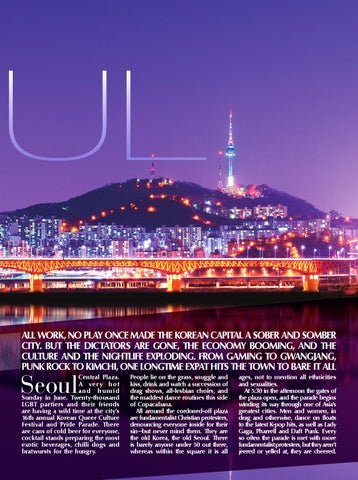 ALL WORK, NO PLAY ONCE MADE THE KOREAN CAPITAL A SOBER AND SOMBER CITY. BUT THE DICTATORS ARE GONE, THE ECONOMY BOOMING, AND THE CULTURE AND THE NIGHTLIFE EXPLODING. FROM GAMING TO GWANGJANG, PUNK ROCK TO KIMCHI, ONE LONGTIME EXPAT HITS THE TOWN TO BARE IT ALL

Central Plaza. A ver y hot and humid Sunday in June. Twenty-thousand LGBT partiers and their friends are having a wild time at the city’s 16th annual Korean Queer Culture Festival and Pride Parade. There are cans of cold beer for everyone, cocktail stands preparing the most exotic beverages, chilli dogs and bratwursts for the hungry.

People lie on the grass, snuggle and kiss, drink and watch a succession of drag shows, all-lesbian choirs, and the maddest dance routines this side of Copacabana. All around the cordoned-off plaza are fundamentalist Christian protesters, denouncing everyone inside for their sin—but never mind them. They are the old Korea, the old Seoul. There is barely anyone under 50 out there, whereas within the square it is all

ages, not to mention all ethnicities and sexualities. At 5:30 in the afternoon the gates of the plaza open, and the parade begins winding its way through one of Asia’s greatest cities. Men and women, in drag and otherwise, dance on floats to the latest K-pop hits, as well as Lady Gaga, Pharrell and Daft Punk. Every so often the parade is met with more fundamentalist protesters, but they aren’t jeered or yelled at, they are cheered. 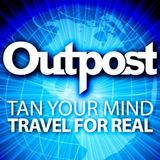 Featuring The Outpost View From Switzerland, A South Korean Renaissance, Lizard Hunting in Nicaragua, Aaland on the Baltic Sea and much more...

Featuring The Outpost View From Switzerland, A South Korean Renaissance, Lizard Hunting in Nicaragua, Aaland on the Baltic Sea and much more...