Out on the Town Magazine: Volume 3, Issue 1 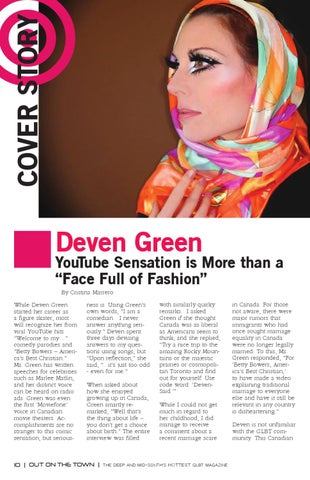 YouTube Sensation is More than a “Face Full of Fashion” By Cristina Marrero While Deven Green started her career as a figure skater, most will recognize her from viral YouTube hits “Welcome to my…” comedy parodies and “Betty Bowers – America’s Best Christian.” Ms. Green has written speeches for celebrities such as Marlee Matlin, and her distinct voice can be heard on radio ads. Green was even the first ‘Moviefone’ voice in Canadian movie theaters. Accomplishments are no stranger to this comic sensation, but serious-

ness is. Using Green’s own words, “I am a comedian…I never answer anything seriously.” Deven spent three days devising answers to my questions using songs, but “Upon reflection,” she said, “...it’s just too odd - even for me.” When asked about how she enjoyed growing up in Canada, Green smartly remarked, “Well that’s the thing about life – you don’t get a choice about birth.” The entire interview was filled

with similarly quirky remarks. I asked Green if she thought Canada was as liberal as Americans seem to think, and she replied, “Try a nice trip to the amazing Rocky Mountains or the majestic prairies or cosmopolitan Toronto and find out for yourself. Use code word: ‘DevenSaid.’” While I could not get much in regard to her childhood, I did manage to receive a comment about a recent marriage scare

in Canada. For those not aware, there were major rumors that immigrants who had once sought marriage equality in Canada were no longer legally married. To this, Ms. Green responded, “For ‘Betty Bowers, America’s Best Christian,’ to have made a video explaining traditional marriage to everyone else and have it still be relevant in any country is disheartening.” Deven is not unfamiliar with the GLBT community. This Canadian

Out on the Town Magazine: Volume 3, Issue 1 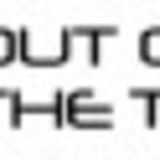 Out on the Town Magazine

More from Out on the Town Magazine