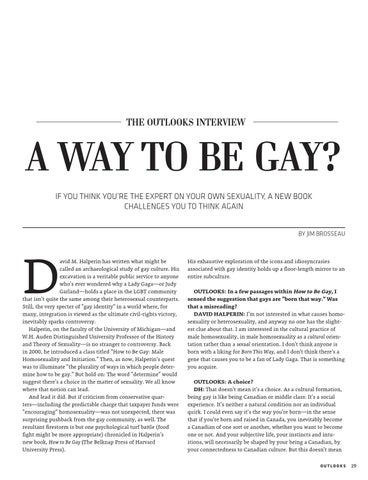 A WAY TO BE GAY? IF YOU THINK YOU’RE THE EXPERT ON YOUR OWN SEXUALITY, A NEW BOOK CHALLENGES YOU TO THINK AGAIN BY JIM BROSSEAU

avid M. Halperin has written what might be called an archaeological study of gay culture. His excavation is a veritable public service to anyone who’s ever wondered why a Lady Gaga—or Judy Garland—holds a place in the LGBT community that isn’t quite the same among their heterosexual counterparts. Still, the very specter of “gay identity” in a world where, for many, integration is viewed as the ultimate civil-rights victory, inevitably sparks controversy. Halperin, on the faculty of the University of Michigan—and W.H. Auden Distinguished University Professor of the History and Theory of Sexuality—is no stranger to controversy. Back in 2000, he introduced a class titled “How to Be Gay: Male Homosexuality and Initiation.” Then, as now, Halperin’s quest was to illuminate “the plurality of ways in which people determine how to be gay.” But hold on: The word “determine” would suggest there’s a choice in the matter of sexuality. We all know where that notion can lead. And lead it did. But if criticism from conservative quarters—including the predictable charge that taxpayer funds were “encouraging” homosexuality—was not unexpected, there was surprising pushback from the gay community, as well. The resultant firestorm is but one psychological turf battle (food fight might be more appropriate) chronicled in Halperin’s new book, How to Be Gay (The Belknap Press of Harvard University Press).

His exhaustive exploration of the icons and idiosyncrasies associated with gay identity holds up a floor-length mirror to an entire subculture. OUTLOOKS: In a few passages within How to Be Gay, I sensed the suggestion that gays are “born that way.” Was that a misreading? DAVID HALPERIN: I’m not interested in what causes homosexuality or heterosexuality, and anyway no one has the slightest clue about that. I am interested in the cultural practice of male homosexuality, in male homosexuality as a cultural orientation rather than a sexual orientation. I don’t think anyone is born with a liking for Born This Way, and I don’t think there’s a gene that causes you to be a fan of Lady Gaga. That is something you acquire. OUTLOOKS: A choice? DH: That doesn’t mean it’s a choice. As a cultural formation, being gay is like being Canadian or middle class: It’s a social experience. It’s neither a natural condition nor an individual quirk. I could even say it’s the way you’re born—in the sense that if you’re born and raised in Canada, you inevitably become a Canadian of one sort or another, whether you want to become one or not. And your subjective life, your instincts and intuitions, will necessarily be shaped by your being a Canadian, by your connectedness to Canadian culture. But this doesn’t mean OUTLOOKS