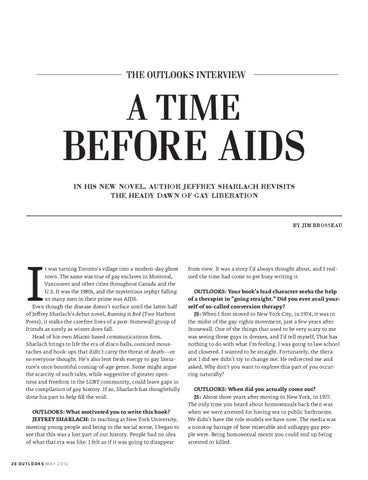 BEFORE AIDS IN HIS NEW NOVEL, AUTHOR JEFFREY SHARLACH REVISITS THE HEADY DAWN OF GAY LIBERATION

t was turning Toronto’s village into a modern-day ghost town. The same was true of gay enclaves in Montreal, Vancouver and other cities throughout Canada and the U.S. It was the 1980s, and the mysterious zephyr falling so many men in their prime was AIDS. Even though the disease doesn’t surface until the latter half of Jeffrey Sharlach’s debut novel, Running in Bed (Two Harbors Press), it stalks the carefree lives of a post-Stonewall group of friends as surely as winter does fall. Head of his own Miami-based communications firm, Sharlach brings to life the era of disco balls, outsized moustaches and hook-ups that didn’t carry the threat of death—or so everyone thought. He’s also lent fresh energy to gay literature’s once bountiful coming-of-age genre. Some might argue the scarcity of such tales, while suggestive of greater openness and freedom in the LGBT community, could leave gaps in the compilation of gay history. If so, Sharlach has thoughtfully done his part to help fill the void. OUTLOOKS: What motivated you to write this book? JEFFREY SHARLACH: In teaching at New York University, meeting young people and being in the social scene, I began to see that this was a lost part of our history. People had no idea of what that era was like. I felt as if it was going to disappear

from view. It was a story I’d always thought about, and I realized the time had come to get busy writing it. OUTLOOKS: Your book’s lead character seeks the help of a therapist in “going straight.” Did you ever avail yourself of so-called conversion therapy? JS: When I first moved to New York City, in 1974, it was in the midst of the gay-rights movement, just a few years after Stonewall. One of the things that used to be very scary to me was seeing these guys in dresses, and I’d tell myself, That has nothing to do with what I’m feeling. I was going to law school and closeted. I wanted to be straight. Fortunately, the therapist I did see didn’t try to change me. He redirected me and asked, Why don’t you want to explore this part of you occurring naturally? OUTLOOKS: When did you actually come out? JS: About three years after moving to New York, in 1977. The only time you heard about homosexuals back then was when we were arrested for having sex in public bathrooms. We didn’t have the role models we have now. The media was a nonstop barrage of how miserable and unhappy gay people were. Being homosexual meant you could end up being arrested or killed.