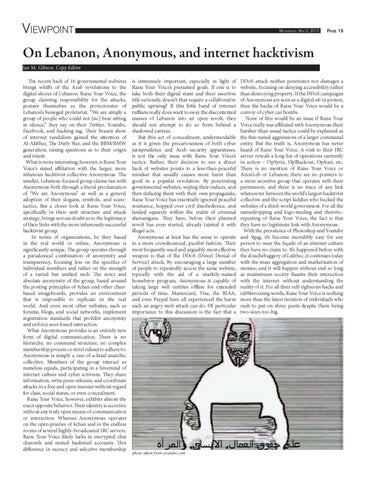 On Lebanon, Anonymous, and internet hacktivism Ian M. Gibson Copy Editor The recent hack of 16 governmental websites brings whiffs of the Arab revolutions to the digital shores of Lebanon. Raise Your Voice, the group claiming responsibility for the attacks, posture themselves as the protectorates of Lebanon’s besieged proletariat. “We are simply a group of people who could not [sic] bear sitting in silence,” they say on their Twitter, Youtube, Facebook, and hacking tag. Their brazen show of internet vandalism gained the attention of Al-Akhbar, The Daily Star, and the BBM/BMW generation, raising questions as to their origin and intent. What is more interesting, however, is Raise Your Voice’s stated affiliation with the larger, more infamous hacktivist collective Anonymous. The smaller, Lebanese-focused group claims ties with Anonymous both through a literal proclamation of “We are Anonymous” as well as a general adoption of their slogans, symbols, and scaretactics. But a closer look at Raise Your Voice, specifically in their unit structure and attack strategy, brings serious doubt as to the legitimacy of their links with the more infamously successful hacktivist group. In terms of organizations, be they based in the real world or online, Anonymous is significantly unique. The group operates through a paradoxical combination of anonymity and transparency, focusing less on the specifics of individual members and rather on the strength of a varied but unified mob. The strict and absolute anonymity of the group, based around the posting principles of 4chan and other chanbased imageboards, provides an environment that is impossible to replicate in the real world. And even most other websites, such as forums, blogs, and social networks, implement registration standards that prohibit anonymity and enforce user-based interaction. What Anonymous provides is an entirely new form of digital communication. There is no hierarchy, no command structure, no complex membership process or strict ruleset to adhere to; Anonymous is simply a one-of-a-kind anarchic collective. Members of the group interact as nameless equals, participating in a hivemind of internet culture and cyber activism. They share information, write press releases, and coordinate attacks in a free and open manner without regard for class, social status, or even concealment. Raise Your Voice, however, exhibits almost the exact opposite behavior. Their identity is secretive without any truly open means of communication or interaction. Whereas Anonymous operates on the open prairies of 4chan and in the endless rooms of several highly-broadcasted IRC servers, Raise Your Voice likely lurks in encrypted chat channels and nested hushmail accounts. This difference in secrecy and selective membership

is immensely important, especially in light of Raise Your Voice’s presumed goals. If one is to take both their digital stunt and their assertive title seriously, doesn’t that require a collaborative public uprising? If this little band of internet ruffians really does want to sway the discontented masses of Lebanon into an open revolt, they should not attempt to do so from behind a shadowed curtain. But this act of concealment, understandable as it is given the precariousness of both cyber jurisprudence and Arab security apparatuses, is not the only issue with Raise Your Voice’s tactics. Rather, their decision to use a direct hack of websites points to a less-than-peaceful mindset that usually causes more harm than good in a popular revolution. By penetrating governmental websites, wiping their indices, and then defacing them with their own propaganda, Raise Your Voice has essentially ignored peaceful resistance, hopped over civil disobedience, and landed squarely within the realm of criminal shenanigans. They have, before their planned revolt has even started, already tainted it with illegal acts. Anonymous at least has the sense to operate in a more crowdsourced, pacifist fashion. Their most frequently used and arguably most effective weapon is that of the DDoS (Direct Denial of Service) attack. By encouraging a large number of people to repeatedly access the same website, typically with the aid of a snarkily-named homebrew program, Anonymous is capable of taking large web entities offline for extended periods of time. Mastercard, Visa, the RIAA, and even Paypal have all experienced the harm such an angry mob attack can do. Of particular importance to this discussion is the fact that a

DDoS attack neither penetrates nor damages a website, focusing on denying accessibility rather than destroying property. If the DDoS campaigns of Anonymous are seen as a digital sit-in protest, then the hacks of Raise Your Voice would be a convoy of cyber car bombs. None of this would be an issue if Raise Your Voice really was affiliated with Anonymous; their harsher-than-usual tactics could be explained as the fine-tuned aggressions of a larger communal entity. But the truth is, Anonymous has never heard of Raise Your Voice. A visit to their IRC server reveals a long list of operations currently in action – OpSyria, OpBlackout, OpIran, etc. There is no mention of Raise Your Voice or AnonLeb or Lebanon; there are no pointers to a more secretive group that operates with their permission; and there is no trace of any link whatsoever between the world’s largest hacktivist collective and the script kiddies who hacked the websites of a third-world government. For all the namedropping and logo-stealing and rhetoricrepeating of Raise Your Voice, the fact is that they have no legitimate link with Anonymous. With the prevalence of Photoshop and Youtube and 9gag, it’s become incredibly easy for any person to wear the façade of an internet culture they have no claim to. It’s happened before with the douchebaggery of LulzSec; it continues today with the mass aggregation and marketization of memes; and it will happen without end so long as mainstream society flaunts their interaction with the internet without understanding the reality of it. For all their self-righteous hacks and rabblerousing words, Raise Your Voice is nothing more than the latest iteration of individuals who rush to put-on shiny pants despite them being two-sizes-too-big. 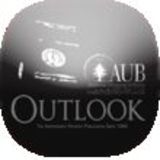