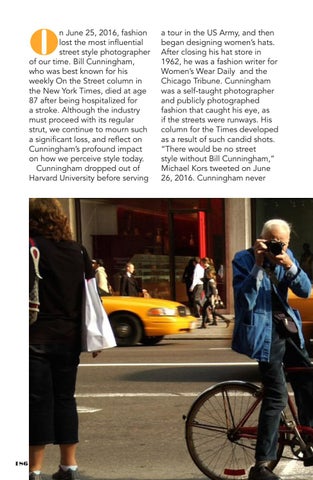 n June 25, 2016, fashion lost the most influential street style photographer of our time. Bill Cunningham, who was best known for his weekly On the Street column in the New York Times, died at age 87 after being hospitalized for a stroke. Although the industry must proceed with its regular strut, we continue to mourn such a significant loss, and reflect on Cunningham’s profound impact on how we perceive style today. Cunningham dropped out of Harvard University before serving

a tour in the US Army, and then began designing women’s hats. After closing his hat store in 1962, he was a fashion writer for Women’s Wear Daily and the Chicago Tribune. Cunningham was a self-taught photographer and publicly photographed fashion that caught his eye, as if the streets were runways. His column for the Times developed as a result of such candid shots. “There would be no street style without Bill Cunningham,” Michael Kors tweeted on June 26, 2016. Cunningham never 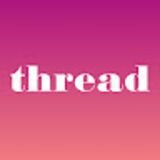