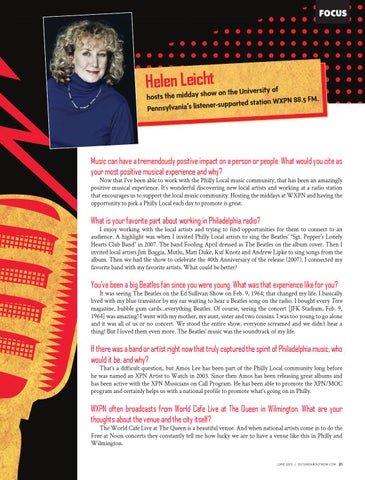 Helen Leicshhowt on the University of

Music can have a tremendously positive impact on a person or people. What would you cite as your most positive musical experience and why?

Now that I’ve been able to work with the Philly Local music community, that has been an amazingly positive musical experience. It’s wonderful discovering new local artists and working at a radio station that encourages us to support the local music community. Hosting the middays at WXPN and having the opportunity to pick a Philly Local each day to promote is great.

What is your favorite part about working in Philadelphia radio?

I enjoy working with the local artists and trying to find opportunities for them to connect to an audience. A highlight was when I invited Philly Local artists to sing the Beatles’ “Sgt. Pepper’s Lonely Hearts Club Band” in 2007. The band Fooling April dressed as The Beatles on the album cover. Then I invited local artists Jim Boggia, Mutlu, Matt Duke, Kuf Knotz and Andrew Lipke to sing songs from the album. Then we had the show to celebrate the 40th Anniversary of the release (2007). I connected my favorite band with my favorite artists. What could be better?

You’ve been a big Beatles fan since you were young. What was that experience like for you?

It was seeing The Beatles on the Ed Sullivan Show on Feb. 9, 1964; that changed my life. I basically lived with my blue transistor by my ear waiting to hear a Beatles song on the radio. I bought every Teen magazine, bubble gum cards...everything Beatles. Of course, seeing the concert [JFK Stadium, Feb. 9, 1964] was amazing! I went with my mother, my aunt, sister and two cousins. I was too young to go alone and it was all of us or no concert. We stood the entire show, everyone screamed and we didn’t hear a thing! But I loved them even more. The Beatles’ music was the soundtrack of my life.

If there was a band or artist right now that truly captured the spirit of Philadelphia music, who would it be, and why?

That’s a difficult question, but Amos Lee has been part of the Philly Local community long before he was named an XPN Artist to Watch in 2003. Since then Amos has been releasing great albums and has been active with the XPN Musicians on Call Program. He has been able to promote the XPN/MOC program and certainly helps us with a national profile to promote what’s going on in Philly.

WXPN often broadcasts from World Cafe Live at The Queen in Wilmington. What are your thoughts about the venue and the city itself?

The World Cafe Live at The Queen is a beautiful venue. And when national artists come in to do the Free at Noon concerts they constantly tell me how lucky we are to have a venue like this in Philly and Wilmington. JUNE 2013 | OUTANDABOUTNOW.COM 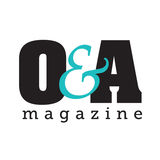