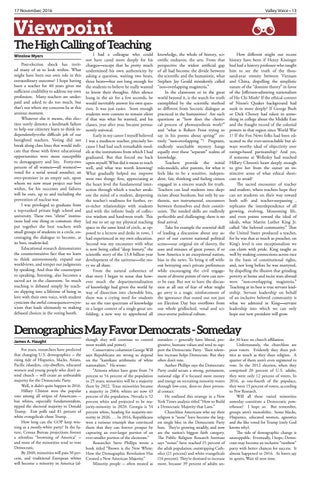 Post-election shock has invited many of us to look within. What might have been our own role in this extraordinary outcome? I hope having been a teacher for 40 years gives me sufficient credibility to address my own profession. Many teachers are underpaid and asked to do too much, but that’s not where my concerns lie at this anxious moment. Whatever else it means, this election surely denotes a landmark failure to help our citizenry learn to think independently—the difficult job of our benighted teachers. Voting did not break along class lines that would indicate that those with fewer educational opportunities were more susceptible to demagoguery and lies. Forty-two percent of all women—all women!— voted for a serial sexual assaulter, an over-promiser in an empty suit, upon whom we now must project our best wishes, for his successes and failures will be ours, up to and including the prevention of nuclear war. I was privileged to graduate from a top-ranked private high school and university. These two “elitist” institutions had one thing in common: they put together the best teachers with small groups of students in a circle, encouraging the dialogue to become, at its best, student-led. Educational research demonstrates the counterintuitive fact that we learn to think autonomously, expand our worldviews, and temper our judgments by speaking. And thus the counterpart to speaking, listening, also becomes a sacred act in the classroom. So much teaching is debased simply by teachers slipping into a lifetime of being in love with their own voice, with student cynicism the awful consequence—cynicism that leads ultimately to making debased choices in the voting booth.

I had a colleague who could not have cared more deeply for his charges—except that he pretty much undermined his own authenticity by asking a question, waiting two beats, three beats—but not long enough for the students to believe he really wanted to know their thoughts. After silence hung in the air for a few seconds, he would inevitably answer his own question. It was just easier. Soon enough students were content to remain silent if that was what he wanted, and his classes, year after year, became permanently univocal. Early in my career I myself believed I was a mediocre teacher, precisely because I had had such remarkable models at the institutions from which I had graduated. But that forced me back upon myself. What did it mean to teach well, and what was worth knowing? What gradually helped me improve were two things: first, appreciating at the heart level the fundamental interaction through which a teacher awakens the mind of a student, deepening the teacher’s readiness for further, ever-richer relationships with students and with the infinite body of collective wisdom and hard-won truth. This led me to set up my physical teaching space in the same kind of circle, as opposed to a lectern and desks in rows, I had experienced in my own education. Second was my encounter with what is now being called “deep history,” the scientific story of the 13.8 billion year development of the universe—the story we all share. From the natural coherence of that story I began to sense that however much the departmentalization of knowledge had given the world by way of dissection into chewable bits, there was a crying need for students to see the vast spectrum of knowledge in a larger context of a single great unfolding, a new way to apprehend all

knowledge, the whole of history, scientific endeavor, the arts. From that perspective the widest artificial gap of all had become the divide between the scientific and the humanistic, what Stephen Jay Gould mistakenly called “non-overlapping magisteria.” In the classroom or in the great world beyond it, is the search for truth exemplified by the scientific method so different from Socratic dialogue as practiced in the humanities? Are such questions as “how does the chemical process of photosynthesis work?” and “what is Robert Frost trying to say in his poems about spring?” entirely “non-overlapping ”? Pregnant, endlessly searchable mystery hangs equally over these “separate” realms of knowledge. Teachers provide the initial role-models, after parents, for what it feels like to be a sensitive, independent, fair, thinking and feeling citizen engaged in a sincere search for truth. Teachers can lead students into skepticism about bunkum, but only by authentic, not instrumental, encounters between themselves and their constituents. The needed skills are endlessly perfectible and challenging; there is no final arrival. Take for example the essential skill of leading a discussion about any aspect of our current national political scene—our original sin of slavery, the uses and misuses of great power, if or how America is an exceptional nation, bias in the news. To bring it off without betraying one’s private preferences while encouraging the civil engagement of diverse points of view can never be easy. But not to have the discussion at all out of fear of what might go awry is a tragic reinforcement of the ignorance that oozed out not just on Election Day but overflows from our whole gridlocked, venal and science-averse political culture.

How different might our recent history have been if Henry Kissinger had had a history professor who taught him to see the truth of the thousand-year enmity between Vietnam and China, dispelling the simplistic nature of the “domino theory” in favor of the Jefferson-admiring nationalism of Ho Chi Minh? If the ethical context of Nixon’s Quaker background had sunk in more deeply? If George Bush or Dick Cheney had taken in something in college about the Middle East and the fraught record of the colonial powers in that region since World War 1? If the Fox News folks had been educated to the ever-unreachable but always worthy ideal of objectivity over ratings-based partisanship? And yes, if someone at Wellesley had touched Hillary Clinton’s heart deeply enough to give her from the outset an instinctive sense of what ethical shortcuts to avoid? The sacred encounter of teacher and student, where teachers hope they can set students on their way toward both self- and teacher-surpassing , replicates the interdependence of all growing, evolving, blossoming life, and even points toward the ideal of ideals, what Martin Luther King Jr. called “the beloved community.” That the United States produced a teacher, for he was that as much as preacher, on King’s level is one exceptionalism we can claim with pride. King taught us well by making connections across race in the basis of constitutional rights, and, not long before he was martyred, by dispelling the illusion that grinding poverty at home and racist wars abroad were “non-overlapping magisteria.” Teaching at its best is true servant leadership. Servant leadership on behalf of an inclusive beloved community is what we admired in King—servant leadership into which we can only hope our new president will grow.

Demographics May Favor Democrats - Someday James A. Haught For years, researchers have predicted that changing U.S. demographics -- the rising tide of Hispanics, blacks, Asians, Pacific islanders, city-dwellers, educated women and young people who don’t attend church -- will create an unbeatable majority for the Democratic Party. Well, it didn’t quite happen in 2016. Hillary Clinton won the popular vote among all stripes of Americans -but whites, especially fundamentalists, tipped the electoral majority to Donald Trump. Exit polls said 81 percent of white evangelicals chose Trump. How long can the GOP keep winning as a mostly-white party? In the future, Census Bureau projections foresee a relentless “browning of America” -and most of the minorities tend to vote Democratic. By 2040, minorities will pass 50 percent, and traditional European whites will become a minority in America (al-

though they will continue to control most wealth and power). Conservative columnist George Will says Republicans are wrong to depend on the “kamikaze arithmetic of white nationalism.” He wrote: “Arizona whites have gone from 74 percent to 54 percent of the population in 25 years; minorities will be a majority there by 2022. Texas minorities became a majority in 2004; whites are now 43 percent of the population. Nevada is 52 percent white and projected to be majority-minority in 2020. Georgia is 54 percent white, heading for majority-minority in 2026. … In 2016, Republicans won a ruinous triumph that convinced them that they can forever prosper by capturing an ever-larger portion of an ever-smaller portion of the electorate.” Researcher Steve Phillips wrote a book titled “Brown is the New White: How the Demographic Revolution Has Created a New American Majority.” Minority people -- often treated as

outsiders -- generally have liberal, progressive, humane values and tend to support the Democratic Party. Their relentless increase helps Democrats. But they often don’t vote. Author Phillips says the Democratic Party could secure a strong, permanent, national edge if it focused more money and energy on recruiting minority voters through low-cost, door-to door personal contact. He outlined this strategy in a New York Times analysis titled “How to Build a Democratic Majority that Lasts.” Churchless Americans who say their religion is “none” have become the largest single bloc in the Democratic Party base. They’re growing steadily, and now are the nation’s biggest faith category. The Public Religion Research Institute says “nones” have reached 25 percent of the adult population, outstripping Catholics (21 percent) and white evangelicals (16 percent). They’re destined to increase more, because 39 percent of adults un-

der 30 have no church affiliation. Unfortunately, the churchless are poor voters. Evidently they shun politics as much as they shun religion. A quarter of them aren’t even registered to vote. In the 2012 election, when they comprised 20 percent of U.S. adults, they were only 12 percent of voters. In 2016, as one-fourth of the populace, they were 15 percent of voters, according to Pew Research. Will all these varied minorities someday constitute a Democratic powerhouse? I hope so. But remember, groups aren’t monolithic. Some blacks, Hispanics, educated women, agnostics and the like voted for Trump (only God knows why). The tide of demographic change is unstoppable. Eventually, I hope, Democrats may become an inclusive “rainbow” party with better chances for success. It almost happened in 2016. As losers say in sports, Wait til next time.