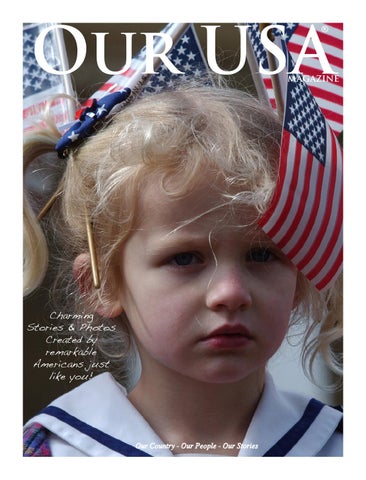 Charming Stories & Photos Created by remarkable Americans just like you!

Our Country - Our People - Our Stories

e have gained so many new contributors (and friends) to our digital edition. Stan Hitchcock, celebrated country music personality, writes a poignant tale of “a memory, a vapor, a ghost of the music that is gone” in The Old Man That Time Forgot. I was immediately enchanted with Suzie Duncan Sexton and Secrets of an Old Typewriter when she expressed that she wrote “stories from a smart and sassy small town girl.” Maura Knowles “The Morselist,” writes about ways to be healthy, in Throw Open the Windows. Our returning contributors – Sally Edelstein, Tama Kieves, Kay Thomas, Mark Barkawitz, Larry Fish, and Shelly Morris – each offer their individual vignettes of “Our USA.” Included among these is a loving tribute about Hope, written by my sister Mary Valentino. I still love print, mind you, but am finding there are many interesting, varied avenues that digital offers, which print does not. For example, we are able to link directly to our contributors’ blogs and websites, and just with a click of your mouse you are taken there. We are able to expand the number of pages, 100 with this issue, primarily because we don’t have to worry about the cost of paper, print and shipping, which allows us to lower the price to our readers. I hope you enjoy our summer issue, and as always, if you have a downto-earth story, a poignant memory, an amusing anecdote or fantastic photography or art to share with us and your fellow Americans, please do so at www.ourusamagazine.com. Wishing you a wonderful summer!

Cher Valentino, Editor Wendy Junker, Marketing Director Our beautiful cover photo is an enigma. It was taken by Photographer’s Mate 1st Class Tina M. Ackerman on March 27, 2002. The caption read “With American flags creating a patriotic theme, a youngster waits on the pier for a Sailor stationed aboard the aircraft carrier USS Theodore Roosevelt (CVN 71), during homecoming events for the carrier battle group (CVBG). Theodore Roosevelt departed Norfolk, Virginia, on September 19, 2001, to join the fight against terror.”

This file is a work of a sailor or employee of the U.S. Navy, taken or made as part of that person’s official duties. As a work of the U.S. federal government, the image is in the public domain. We have been unable to track down the photographer or the little girl who would now be a teenager. Does anyone out there know these people?

All rights reserved. Reproduction in any manner, in whole or part is prohibited.

Our Country, Our People, Our Stories

Iconic photographer Carol Highsmith’s gifts to all the American people.

Will the next Revolutionary War take place in our own backyards?

Gardening from seed to Harvest. 

The mid-century American housewife was the most envied woman in the world.

This story is nothing short of a real life Notebook.

42 Roll Up for the Mystery Tour

Memories of a place held deep in your heart.

Trust in yourself and you’ll likely find everything you’re looking for.

Open sunshine! Open your windows and breathe in the fresh air! A lil’ fresh oxygen does the body and soul good.

Discover Your Real Self

When a little help from a friend seems appropriate.

78 The All Stars As American as baseball and mom’s apple pie.Old images, old smells, old memoriies, stir up the deepest emotions.

Stories from a smart and sassy small town girl.

Change Those Summertime Picnics The Story of Change urges us

An informal gathering of old and new friends, and food.

to start exercising our citizen muscles to build a more sustainable, just and fulfilling world.

Carol M. Highsmith, a distinguished and richly published American photographer, has donated her work to the Library of Congress since 1992, and has dedicated the rights to America’s people. On April 28, 2013, the CBS television news magazine “CBS This Morning” featured Highsmith’s work in a lengthy segment titled, “Saving America for Posterity at the Library of Congress.”

Snow Cap burger cafe, Route 66, Seligman, Arizona - July, 2006 Delgadillos is also known for its silly staff, described by some as “madcap,” who have been known to make a show out of entertaining kids with fun practical jokes.

Hamel is where the two Metro East alignments of Route 66 part ways, the earlier path heading through Edwardsville and Mitchell towards the Chain of Rocks Bridge and the Show Me State. The later corridor heads further south towards Troy and Collinsville before heading into Missouri from East Saint Louis. July, 2009

By Daisy Luther The Organic Prepper

10 Ways to Sow Revolution In Your Own Back Yard

ometimes I think that the next Revolutionary War will take place in a vegetable garden. Instead of bullets, there will be seeds. Instead of chemical warfare, there will be rainwater, carefully collected from the gutters of the house. Instead of soldiers in body armor and helmets, there will be back yard rebels, with bare feet, cut-off jean shorts, and wide-brimmed hats. Instead of death, there will be life, sustained by a harvest of home-grown produce. Children will be witness to these battles, but instead of being traumatized, they will be happy, grimy, and healthy, as they learn about the miracles that take place in a little plot of land or pot of dirt. Every day, the United Nations and the Powers That Be take steps toward food totalitarianism. They do so flying a standard of “sustainability,” but what they are actually trying to sustain is NOT our natural resources, but their control. This morning I came across one of the most inspiring, beautifully written articles that I’ve had the pleasure of reading in a long time. Julian Rose, a farmer, actor, activist, and writer, wrote an article called “Civil Disobedience or Death by Design” and it is a “must read” for anyone who believes in the importance of natural food sources. “From now on, unless we cut free of obeisance to the centralised, totalitarian regimes whose takeover of our planet is almost complete, we will have only ourselves to blame. For we are complicit in allowing ourselves to become slaves of the Corporate State and its cyborg enforcement army. That is, if we continue to remain hypnotized by their antics instead of taking our destinies into our own hands and blocking or refusing to comply with their death warrants. This ‘refusal’ is possible. But it will only have the desired effect when, and if, it is contemporaneous with the birthing of the Divine warrior who sleeps in us all. The warrior who sleeps-on, like the besotted Rip Van Winkle in the Catskill mountains.”

he home I left more than three decades ago is no more. The houses I lived in are still there, but my childhood is long past. My trips to my hometown are for funerals, wakes or cemetery visits. Ten days ago, my brother, father, and I drove to the cemetery to visit my motherâ&#x20AC;&#x2122;s grave. That Saturday was a sunny day with a hint that spring may be coming.

We are a non-partisan organization lobbying for American made manufacturers, small business owners, suppliers, distributors, mom and pop stores, local boutiques and service providers. We are dedicated to encouraging consumers to buy American made products; providing our members with resources to expand their use of U.S. made products; and serving as a place to share ideas to increase our membersâ&#x20AC;&#x2122; bottom lines. We are a conduit for change by uniting American voices to tell Washington to bring American jobs home.

Receive 15% off membership when you mention Our USA Magazine 12

he old man stood in the shadows, back stage in the large, historic theater, leaning on his push broom next to the wheeled cart that held his cleaning supplies, listening to the loud music and screaming crowd. His arthritis was aching bad tonight, his hands twisted and swollen, and although he could no longer make the chords on his guitar, he could still hold the broom well enough to get by. He was lucky the theater manager dimly remembered his theater history, when the old man had stood on that stage, sharing the show with Hank Williams, Sr., Red Foley and Minnie Pearl. Yeah, it had been 63 years ago, now, and he had just been 24 years old, but already had his number one song on the charts, hmmm…man, it don’t seem more than yesterday. Those were the days, man, rolling high, drawing the crowds, selling the records. He would have to make a point to meet this young Star when he came off stage, tell him a few stories of where it all came from, this Country Music…yeah, that’s what he’d do.

He had been hungry and cold, the day he came and applied for the janitor position at the old theater, but then, seemed like he always felt hungry and cold, in his late eighties, but able to lie and pass for a somewhat younger age, because he really needed to find work. The flop house where he had a bed was threatening to kick him out if he didn’t come up with some money. Come up with some money…man, that used to not be a problem…not for him in the glory years…Now, it was old age pension, and a small retirement check each month from the Musicians Union, which together just barely paid for the lumpy bed, a meal a day and a bottle of Thunderbird Wine about once a week.

The Old Man That Time Forgot By Stan Hitchcock

edia, a suburb of Philadelphia, has all the great qualities of a special home town. Its most distinguishing feature is its trolley cars. Running in the center of the main avenue, State Street, the trolley system is the only one of its type still in operation in the entire country. Being the original final stop of the railroad from center city, Media originated as a summer vacation destination for Philadelphians. Media was home to a number of grand hotels that have since been converted into homes and businesses. Throughout the year, many outdoor events are held along State Street and have become annual traditions. From the lighting of the tree and the holiday lights outlining the buildings, to several food, arts and craft fairs, music events, and car shows, Media provides an abundance of special events for all to enjoy.

Advertise Your Product Here Increase Your Web Traffic by Targeting our Web Audience and Digital Subscribers! 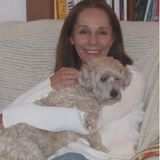 Charming Stories & Photos Created by Remarkable Americans Just Like You!

Charming Stories & Photos Created by Remarkable Americans Just Like You!