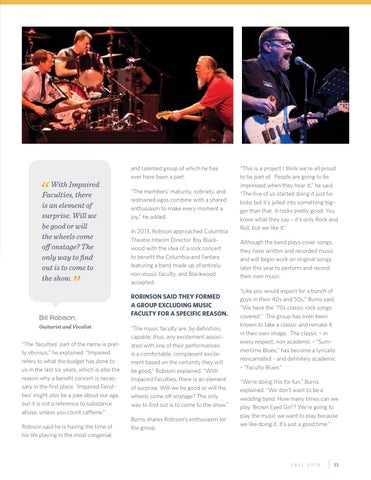 With Impaired Faculties, there is an element of surprise. Will we be good or will the wheels come off onstage? The only way to find out is to come to the show.

“The ‘faculties’ part of the name is pretty obvious,” he explained. “Impaired refers to what the budget has done to us in the last six years, which is also the reason why a benefit concert is necessary in the first place. ‘Impaired Faculties’ might also be a joke about our age, but it is not a reference to substance abuse, unless you count caffeine.” Robison said he is having the time of his life playing in the most congenial

and talented group of which he has ever have been a part. “The members’ maturity, sobriety, and restrained egos combine with a shared enthusiasm to make every moment a joy,” he added. In 2013, Robison approached Columbia Theatre Interim Director Roy Blackwood with the idea of a rock concert to benefit the Columbia and Fanfare featuring a band made up of entirely non-music faculty, and Blackwood accepted. ROBINSON SAID THEY FORMED A GROUP EXCLUDING MUSIC FACULTY FOR A SPECIFIC REASON. “The music faculty are, by definition, capable; thus, any excitement associated with one of their performances is a comfortable, complacent excitement based on the certainty they will be good,” Robison explained. “With Impaired Faculties, there is an element of surprise. Will we be good or will the wheels come off onstage? The only way to find out is to come to the show.” Burns shares Robison’s enthusiasm for the group.

“This is a project I think we’re all proud to be part of. People are going to be impressed when they hear it,” he said. “The five of us started doing it just for kicks but it’s jelled into something bigger than that. It rocks pretty good. You know what they say – it’s only Rock and Roll, but we like it.” Although the band plays cover songs, they have written and recorded music and will begin work on original songs later this year to perform and record their own music. “Like you would expect for a bunch of guys in their 40s and 50s,” Burns said. “We have the ’70s classic rock songs covered.” The group has even been known to take a classic and remake it in their own image. The classic – in every respect, non academic – “Summertime Blues,” has become a lyrically reincarnated – and definitely academic – “Faculty Blues.” “We’re doing this for fun,” Burns explained. “We don’t want to be a wedding band. How many times can we play ‘Brown Eyed Girl’? We’re going to play the music we want to play because we like doing it. It’s just a good time.” 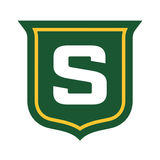