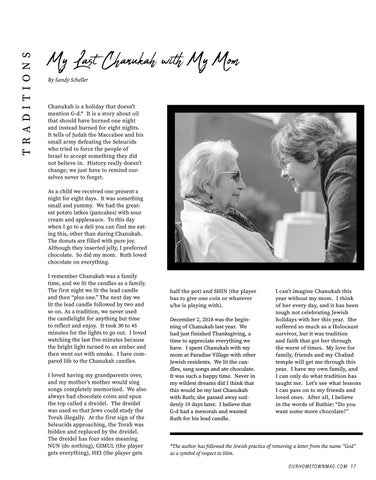 My Last Chanukah with My Mom By Sandy Scheller

Chanukah is a holiday that doesn’t mention G-d.* It is a story about oil that should have burned one night and instead burned for eight nights. It tells of Judah the Maccabee and his small army defeating the Seleucids who tried to force the people of Israel to accept something they did not believe in. History really doesn’t change; we just have to remind ourselves never to forget. As a child we received one present a night for eight days. It was something small and yummy. We had the greatest potato latkes (pancakes) with sour cream and applesauce. To this day when I go to a deli you can find me eating this, other than during Chanukah. The donuts are filled with pure joy. Although they inserted jelly, I preferred chocolate. So did my mom. Ruth loved chocolate on everything. I remember Chanukah was a family time, and we lit the candles as a family. The first night we lit the lead candle and then “plus one.” The next day we lit the lead candle followed by two and so on. As a tradition, we never used the candlelight for anything but time to reflect and enjoy. It took 30 to 45 minutes for the lights to go out. I loved watching the last five minutes because the bright light turned to an ember and then went out with smoke. I have compared life to the Chanukah candles. I loved having my grandparents over, and my mother’s mother would sing songs completely memorized. We also always had chocolate coins and spun the top called a dreidel. The dreidel was used so that Jews could study the Torah illegally. At the first sign of the Seleucids approaching, the Torah was hidden and replaced by the dreidel. The dreidel has four sides meaning NUN (do nothing), GIMUL (the player gets everything), HEI (the player gets

half the pot) and SHIN (the player has to give one coin or whatever s/he is playing with). December 2, 2018 was the beginning of Chanukah last year. We had just finished Thanksgiving, a time to appreciate everything we have. I spent Chanukah with my mom at Paradise Village with other Jewish residents. We lit the candles, sang songs and ate chocolate. It was such a happy time. Never in my wildest dreams did I think that this would be my last Chanukah with Ruth; she passed away suddenly 19 days later. I believe that G-d had a menorah and wanted Ruth for his lead candle.

I can’t imagine Chanukah this year without my mom. I think of her every day, and it has been tough not celebrating Jewish holidays with her this year. She suffered so much as a Holocaust survivor, but it was tradition and faith that got her through the worst of times. My love for family, friends and my Chabad temple will get me through this year. I have my own family, and I can only do what tradition has taught me. Let's see what lessons I can pass on to my friends and loved ones. After all, I believe in the words of Ruthie: “Do you want some more chocolate?”

*The author has followed the Jewish practice of removing a letter from the name “God” as a symbol of respect to Him. O U R H O M E TO W NM AG.CO M 17 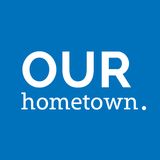