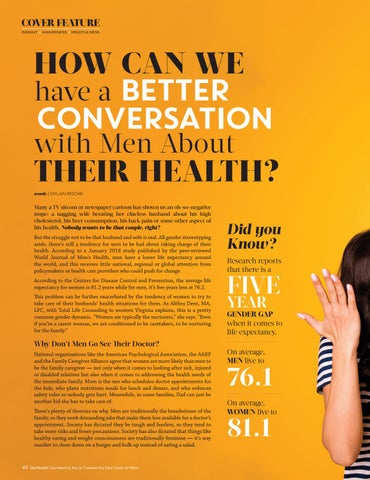 HOW CAN WE have a BETTER CONVERSATION with Men About

Many a TV sitcom or newspaper cartoon has shown us an oh-so-negative trope: a nagging wife berating her clueless husband about his high cholesterol, his beer consumption, his back pain or some other aspect of his health. Nobody wants to be that couple, right? But the struggle not to be that husband and wife is real. All gender stereotyping aside, there’s still a tendency for men to be bad about taking charge of their health. According to a January 2018 study published by the peer-reviewed World Journal of Men’s Health, men have a lower life expectancy around the world, and this receives little national, regional or global attention from policymakers or health care providers who could push for change. According to the Centers for Disease Control and Prevention, the average life expectancy for women is 81.2 years while for men, it’s five years less at 76.2. This problem can be further exacerbated by the tendency of women to try to take care of their husbands’ health situations for them. As Althea Dent, MA, LPC, with Total Life Counseling in western Virginia explains, this is a pretty common gender dynamic. “Women are typically the nurturers,” she says. “Even if you’re a career woman, we are conditioned to be caretakers, to be nurturing for the family.”

Why Don’t Men Go See Their Doctor? National organizations like the American Psychological Association, the AARP and the Family Caregiver Alliance agree that women are more likely than men to be the family caregiver — not only when it comes to looking after sick, injured or disabled relatives but also when it comes to addressing the health needs of the immediate family. Mom is the one who schedules doctor appointments for the kids, who plans nutritious meals for lunch and dinner, and who enforces safety rules so nobody gets hurt. Meanwhile, in some families, Dad can just be another kid she has to take care of. There’s plenty of theories on why. Men are traditionally the breadwinner of the family, so they work demanding jobs that make them less available for a doctor’s appointment. Society has dictated they be tough and fearless, so they tend to take more risks and fewer precautions. Society has also dictated that things like healthy eating and weight consciousness are traditionally feminine — it’s way manlier to chow down on a burger and bulk up instead of eating a salad.

OurHealth | Connecting You to Trustworthy Care Close to Home

Did you Know? Research reports that there is a

GENDER GAP when it comes to life expectancy. On average, MEN live to

In the latest edition of OurHealth Magazine for Charlottesville & Shenandoah Valley we honor those who represent the front line of our healthcare system, NURSES! Join us as we recognize 8,649 nurses from across the Charlottesville & Shenandoah Valley area. Plus, Our special Men's Health feature: Better Conversations with Men About Their Health. And, get the skinny on the top FDA approved Nonsurgical Fat Reduction procedures, available locally! That and much more in this issue of OurHealth! 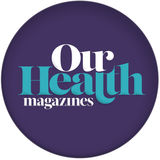