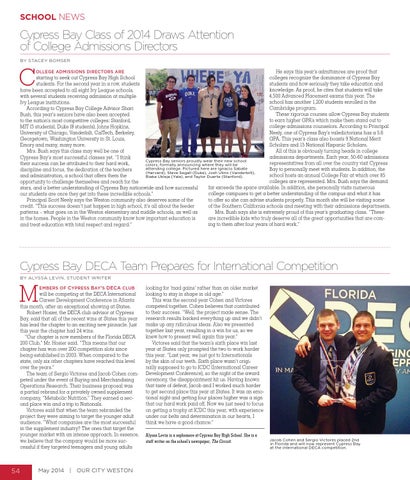 He says this year’s admittances are proof that colleges recognize the dominance of Cypress Bay starting to seek out Cypress Bay High School students and how seriously they take education and students. For the second year in a row, students knowledge. As proof, he cites that students will take have been accepted to all eight Ivy League schools, 4,500 Advanced Placement exams this year. The with several students receiving admission at multiple school has another 1,200 students enrolled in the Ivy League institutions. Cambridge program. According to Cypress Bay College Advisor Shari These rigorous courses allow Cypress Bay students Bush, this year’s seniors have also been accepted to earn higher GPA’s which make them stand out to to the nation’s most competitive colleges: Stanford, college admissions counselors. According to Principal MIT (5 students), Duke (8 students), Johns Hopkins, Neely, one of Cypress Bay’s valedictorians has a 5.6 University of Chicago, Vanderbilt, CalTech, Berkeley, GPA. This year’s class also boasts 9 National Merit Georgetown, Washington University in St. Louis, Scholars and 15 National Hispanic Scholars. Emory and many, many more. All of this is obviously turning heads in college Mrs. Bush says this class may well be one of admissions departments. Each year, 50-60 admissions Cypress Bay’s most successful classes yet. “I think Cypress Bay seniors proudly wear their new school representatives from all over the country visit Cypress their success can be attributed to their hard work, colors, formally announcing where they will be attending college. Pictured here are Ignacio Sabate Bay to personally meet with students. In addition, the discipline and focus, the dedication of the teachers (Harvard), Steve Segall (Duke), Josh Ulino (Vanderbilt), school hosts an annual College Fair at which over 85 and administration, a school that offers them the Biaka Ukleja (Yale), and Taylor Duarte (Stanford). colleges are represented. Mrs. Bush says the demand opportunity to challenge themselves and reach for the far exceeds the space available. In addition, she personally visits numerous stars, and a better understanding of Cypress Bay nationwide and how successful college campuses to get a better understanding of the campus and what it has our students are once they get into these incredible schools.” to offer so she can advise students properly. This month she will be visiting some Principal Scott Neely says the Weston community also deserves some of the of the Southern California schools and meeting with their admissions departments. credit. “This success doesn’t just happen in high school, it’s all about the feeder Mrs. Bush says she is extremely proud of this year’s graduating class. “These patterns – what goes on in the Weston elementary and middle schools, as well as are incredible kids who truly deserve all of the great opportunities that are comin the homes. People in the Weston community know how important education is ing to them after four years of hard work.” and treat education with total respect and regard.” ollege admissions directors are

will be competing at the DECA International Career Development Conference in Atlanta this month, after an exceptional showing at States. Robert Hosier, the DECA club advisor at Cypress Bay, said that all of the recent wins at States this year has lead the chapter to an exciting new pinnacle. Just this year the chapter had 24 wins. “Our chapter is now members of the Florida DECA 200 Club,” Mr. Hosier said. “This means that our chapter has won over 200 competition slots since being established in 2003. When compared to the state, only six other chapters have reached this level over the years.” The team of Sergio Victores and Jacob Cohen competed under the event of Buying and Merchandising Operations Research. Their business proposal was a partial rebrand for a privately owned supplement company, “Metabolic Nutrition.” They earned a second place win and a trip to Nationals. Victores said that when the team rebranded the project they were aiming to target the younger adult audience. “What companies are the most successful in the supplement industry? The ones that target the younger market with an intense approach. In essence, we believe that the company would be more successful if they targeted teenagers and young adults

looking for ‘mad gains’ rather than an older market looking to stay in shape in old age.” This was the second year Cohen and Victores competed together. Cohen believes that contributed to their success. “Well, the project made sense. The research results backed everything up and we didn’t make up any ridiculous ideas. Also we presented together last year, resulting in a win for us, so we knew how to present well again this year.” Victores said that the team’s sixth place win last year at States only prompted the two to work harder this year. “Last year, we just got to Internationals by the skin of our teeth. Sixth place wasn’t originally supposed to go to ICDC (International Career Development Conference), so the night of the award ceremony, the disappointment hit us. Having known that taste of defeat, Jacob and I worked much harder to get second place this year at States. It was an emotional night and getting four places higher was a sign that our hard work paid off. Now we just need to focus on getting a trophy at ICDC this year, with experience under our belts and determination in our hearts, I think we have a good chance.” Alyssa Levin is a sophomore at Cypress Bay High School. She is a staff writer on the school’s newspaper, The Circuit.

Jacob Cohen and Sergio Victores placed 2nd in Florida and will now represent Cypress Bay at the international DECA competition. 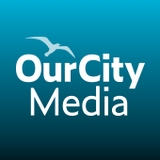