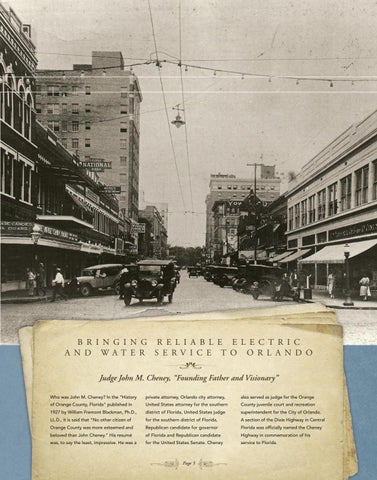 Orlando Gets First Power Plant At the turn of the century, Judge Cheney and

produce. Water from the water plant and

his sons began construction on an electric

electricity from the power plant were used to

In 1905, the company purchased a coal gas

plant and distribution network that had been

in operation since 1889. The gas plant, located

horsepower steam engine, had capacity of only

in the western part of the City, had a capacity

100 kilowatts. Initially, electricity was provided to

homes, stores and street lights on a “dark to

In 1901, the company was awarded a contract by the City of Orlando to provide 28 street lights

More than 15 years later, in July 1921, Orlando was authorized by the state legislature to issue

$1.5 million in bonds for purchase or construction

equivalent in incandescent lamps for $2,000 per

of a water and light plant, subject to a referendum

annum.” The City of Orlando previously had

vote. In September of that year, the City made an

Company to buy the electric and water plant, at a

price to be fixed by a board of three arbiters.

plant (with an ice-making capacity of 60 tons per

need for wider services than his company was able

day and the capability to store 300 tons) at the

to supply — urged his friends to work and vote for

Lake Highland site, adjacent to the power and

Orlando to purchase and municipally operate his

neighboring towns, the ice was used to cool

railroad cars and trucks that shipped fruit and

Commission was about to be born.

Who was John M. Cheney? In the “History

also served as judge for the Orange

of Orange County, Florida” published in

United States attorney for the southern

superintendent for the City of Orlando.

LL.D., it is said that “No other citizen of

for the southern district of Florida,

A section of the Dixie Highway in Central

Orange County was more esteemed and

Florida was officially named the Cheney

beloved than John Cheney.” His resumé

of Florida and Republican candidate

Highway in commemoration of his

was, to say the least, impressive. He was a

for the United States Senate. Cheney