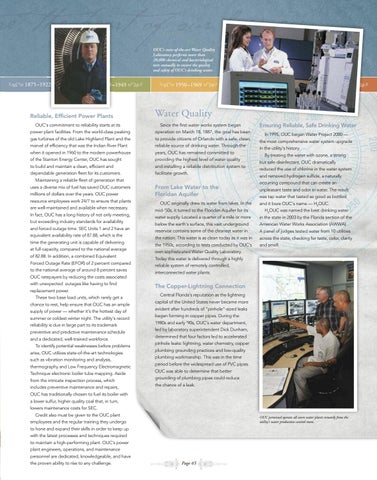 “Reliability is our corporate culture, the heart of our business.”

became known as “The Reliable One,” the

wire was commonly used for this purpose in

distribution engineering division was always at

commitment to providing the highest level of

transmission lines, its application on distribution

the forefront of that development by being

gas turbines of the old Lake Highland Plant and the

to provide citizens of Orlando with a safe, clean,

service to customers goes back to the early days

one of the leading users of new technology

marvel of efficiency that was the Indian River Plant

reliable source of drinking water. Through the

created by the industry. In some instances, it was

when it opened in 1960 to the modern powerhouse

years, OUC has remained committed to

necessary to replace existing facilities that had

of the Stanton Energy Center, OUC has sought

already been designed and constructed due to

to build and maintain a clean, efficient and

and installing a reliable distribution system to

failure of some component.”

dependable generation fleet for its customers.

of the company. The need for reliable service began at the turn of the 20th

in 1934 with funds from the federal government.

These lines were predominantly used for

By the late 1970s, OUC had established

Maintaining a reliable fleet of generation that

commercial installation. “When I started work

uses a diverse mix of fuel has saved OUC customers

at OUC in 1949, the downtown area was almost

millions of dollars over the years. OUC power

Lou Stone. ”It is my understanding that the

OUC remains at the forefront of technology

are well-maintained and available when necessary.

and currently utilizes the industry-proven

In fact, OUC has a long history of not only meeting,

electric service was available, and Orlando was

but exceeding industry standards for availability

on its way to becoming a vibrant city. As the

that had been constructed by the WPA (Works

and forced outage time. SEC Units 1 and 2 have an

City grew, so did the need to control crime.

Progress Administration) in the early 1930s. The

cables. The utility will continue to seek more

equivalent availability rate of 87.88, which is the

primary installation was constructed with cables

time the generating unit is capable of delivering

that utilized lead covering on the outer surface.

at full capacity, compared to the national average

This was the standard at that time.”

Over the years, OUC has remained committed

of 82.88. In addition, a combined Equivalent

Stone went on to say that “underground

to investing in the technology and infrastructure

construction for electrical distribution was just

to the national average of around 8 percent saves

to ensure a high level of electric reliability. During

beginning to enter the market when I became

the 1950s, the utility took that commitment to the

Manager of Electric Operations in the latter

next level by investing in a new technology called

half of the 1960s. It was a painful experience for

both the industry and users like OUC. The major

These two base load units, which rarely get a

OUC was one of the first utilities in the state

problem was the development of insulation that

chance to rest, help ensure that OUC has an ample

to use static shield wire to protect its distribution

would withstand the rigors of being underground

supply of power — whether it’s the hottest day of

system against lightning strikes — a cause of

for many years and the stresses associated with

summer or coldest winter night. The utility’s record reliability is due in large part to its trademark preventive and predictive maintenance schedule and a dedicated, well-trained workforce. To identify potential weaknesses before problems arise, OUC utilizes state-of-the-art technologies such as vibration monitoring and analysis, thermography and Low Frequency Electromagnetic Technique electronic boiler tube mapping. Aside from the intricate inspection process, which Engineering and distribution activities reached unparalleled levels in 1990 as work orders soared 47 percent to $28 million. Nearly two decades later, OUC continued to power growth including a new Medical City in Southeast Orlando.

Ensuring Reliable, Safe Drinking Water In 1995, OUC began Water Project 2000 — the most comprehensive water system upgrade in the utility’s history. By treating the water with ozone, a strong but safe disinfectant, OUC dramatically reduced the use of chlorine in the water system and removed hydrogen sulfide, a naturally occurring compound that can create an unpleasant taste and odor in water. The result was tap water that tasted as good as bottled and it bore OUC’s name — H2OUC. H2OUC was named the best drinking water

water supply. Located a quarter of a mile or more

in the state in 2003 by the Florida section of the

below the earth’s surface, this vast underground

reservoir contains some of the cleanest water in

A panel of judges tested water from 10 utilities

the nation. This water is as clean today as it was in

across the state, checking for taste, color, clarity

the 1950s, according to tests conducted by OUC’s

The Copper-Lightning Connection Central Florida’s reputation as the lightning capital of the United States never became more evident after hundreds of “pinhole”-sized leaks began forming in copper pipes. During the 1980s and early ‘90s, OUC’s water department, led by laboratory superintendent Dick Dunham, determined that four factors led to accelerated pinhole leaks: lightning, water chemistry, copper plumbing grounding practices and low-quality plumbing workmanship. This was in the time period before the widespread use of PVC pipes. OUC was able to determine that better grounding of plumbing pipes could reduce the chance of a leak.

OUC has traditionally chosen to fuel its boiler with a lower sulfur, higher quality coal that, in turn, lowers maintenance costs for SEC. Credit also must be given to the OUC plant

employees and the regular training they undergo to hone and expand their skills in order to keep up with the latest processes and techniques required to maintain a high-performing plant. OUC’s power plant engineers, operations, and maintenance personnel are dedicated, knowledgeable, and have

the proven ability to rise to any challenge.