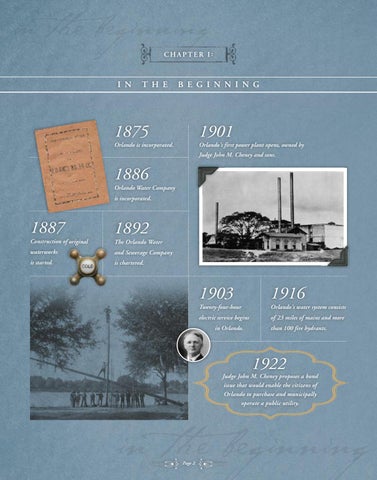 he foundation for what would eventually become the Orlando Utilities Commission

cattle ranching and citrus growing to a thriving center of commerce. Attracted by fertile farm land and warm weather, settlers arrived from all over the country, as well as from abroad. In 1880, the South

Central Florida was just beginning to evolve from a rural, agrarian economy based on

was laid even before the 20th century began. In 1875, when Orlando was incorporated,

Actual construction of the original water works — which consisted of a plant and a distribution system — began on March 18, 1887. The source of water was Lake Highland, which at that time was located well outside the Orlando city limits. In 1889, additional water mains were laid to serve most of the well-settled areas of Orlando with a safe domestic supply and fire protection.

land booms in the Sunshine State. By the turn of the century, Orlando had paved streets, as well as

The additions increased the distribution system

electricity and phone service. In 1908, it was officially dubbed “The City Beautiful.” By the time World

War I broke out, the City had become a popular resort. The war generated additional industrial growth

As a result of the death of Herdic in 1890, a receivership took over the Orlando Water

for reliable water and electric infrastructure in the region . . . and setting the stage for the birth of OUC.

at the time, represented the bond holders. The landholders foreclosed the property and turned it over to a new corporation, the Orlando Water

by a popular election in which 22 citizens cast

the landholders, was President. Cheney became

their votes. Ten years later, the City received a

charter by action of the Florida Legislature. At

Cheney, who by then had become an

that time, the community’s only source of water

of 23 miles of mains and more

was a town well located next to the Orange

in 1893, serving as Secretary-Treasurer and

County Court House at the corner of Central

City Council granted to A.A. Parker and his

by the City of Orlando to pump water from

associates a 10-year franchise to construct,

maintain and operate a water works within the

water to the City.

1922 Judge John M. Cheney proposes a bond issue that would enable the citizens of Orlando to purchase and municipally operate a public utility.

municipality. The Orlando Water Company was incorporated on October 20, 1886 with initial

By 1916, Orlando’s water supply system consisted of 23 miles of mains, which covered

every part of the City, and more than 100 fire

and Peter Herdic were the incorporators.

hydrants were installed in different parts of

They and their financial backers, who were

from Huntington and Williamsport,

In 1917, the first filtrated treatment facilities

were built near Lake Highland to treat water

obtained from the lake before passing into the

in other Pennsylvania communities as well as

and Sewerage Company, its charter being dated