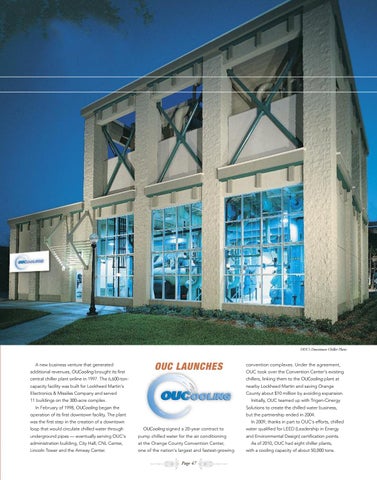 In 2007, OUC and St. Cloud marked a decade-long relationship.

A New Power Partnership: OUC and the City of St. Cloud In a precedent-setting move, OUC entered

serve as the foundation for their partnership

into a 25-year Interlocal Agreement with its

neighbor, the City of St. Cloud, to manage,

• Reliability: OUC promised to make significant improvements in the reliability of electric service.

operate and maintain the City’s electric system. The agreement, which became effective May 1, 1997, was the first of its kind in the state. With vast tracts of undeveloped land, St. Cloud understood that it was on the threshold of tremendous growth — but that it would take an investment in infrastructure and competitive rates to realize that potential. With that in mind, St. Cloud looked to OUC, with its long record of outstanding service and affordable rates. The two entered a long-term agreement, identifying five areas that would

• Rates: OUC promised to lower the electric rates of St. Cloud customers. • Retention: OUC agreed to hire the St. Cloud utility employees. • Return: OUC agreed to provide regular payments to the City of St. Cloud based on revenue growth. • Representation: Both partners formed a contract committee to oversee the longterm agreement. Over the years, OUC kept its promises, continuing to provide clean, affordable, reliable power to St. Cloud and serving as a community partner to help make the City strong and prosperous.

chillers, linking them to the OUCooling plant at

nearby Lockheed Martin and saving Orange

County about $10 million by avoiding expansion.

Initially, OUC teamed up with Trigen-Cinergy

In February of 1998, OUCooling began the

operation of its first downtown facility. The plant

but the partnership ended in 2004.

was the first step in the creation of a downtown

convention complexes. Under the agreement,

loop that would circulate chilled water through

OUCooling signed a 20-year contract to

at the Orange County Convention Center,

Lincoln Tower and the Amway Center.

one of the nation’s largest and fastest-growing