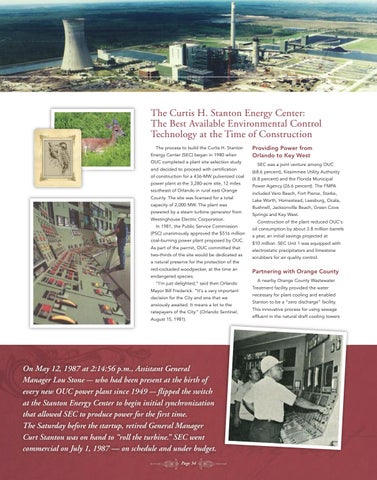 The Curtis H. Stanton Energy Center: The Best Available Environmental Control Technology at the Time of Construction The process to build the Curtis H. Stanton Energy Center (SEC) began in 1980 when OUC completed a plant site selection study and decided to proceed with certification of construction for a 436-MW pulverized coal power plant at the 3,280-acre site, 12 miles southeast of Orlando in rural east Orange County. The site was licensed for a total capacity of 2,000 MW. The plant was powered by a steam turbine generator from Westinghouse Electric Corporation. In 1981, the Public Service Commission (PSC) unanimously approved the $516 million coal-burning power plant proposed by OUC. As part of the permit, OUC committed that two-thirds of the site would be dedicated as

a natural preserve for the protection of the red-cockaded woodpecker, at the time an endangered species. “I’m just delighted,” said then Orlando Mayor Bill Frederick. “It’s a very important decision for the City and one that we anxiously awaited. It means a lot to the ratepayers of the City.” (Orlando Sentinel, August 15, 1981).

Partnering with Orange County A nearby Orange County Wastewater Treatment facility provided the water necessary for plant cooling and enabled Stanton to be a “zero discharge” facility. This innovative process for using sewage effluent in the natural draft cooling towers

benefitted both OUC and Orange County.

claimed that OUC was trying to slip

Up until then, the disposition of sewage

effluent was a costly environmental problem

the Florida Department of Environmental

for Orange County, and the use of sewage

Regulation and plant opponents. In addition,

effluent by Stanton was an important part

cities along the most “practical route” for

of the solution. In addition, the Orange

County landfill next door to the plant had

the potential for utilizing landfill gas or

and passed resolutions protesting the trains coming through their towns.

Officials said they were worried about coal dust and traffic jams (Orlando Sentinel, December 12, 1982). But the protests were silenced in 1984,

doubled the rate of any similar construction

project in Florida. The record participation

was the result of meeting an aggressive

established when the project began.

Through a Minority Participation Board

and the addition of a minority employment

the project. In what

was referred to as the

“Vote No to Vote Yes”

the first of their kind in Florida.

campaign, the wording on the ballot required a “no” vote to indicate support

Of course, the proposed power plant was not without its detractors. In March 1982, the Sierra Club, an environmental group,

On May 12, 1987 at 2:14:56 p.m., Assistant General Manager Lou Stone — who had been present at the birth of every new OUC power plant since 1949 — flipped the switch at the Stanton Energy Center to begin initial synchronization that allowed SEC to produce power for the first time. The Saturday before the startup, retired General Manager Curt Stanton was on hand to “roll the turbine.” SEC went commercial on July 1, 1987 — on schedule and under budget. Page 34