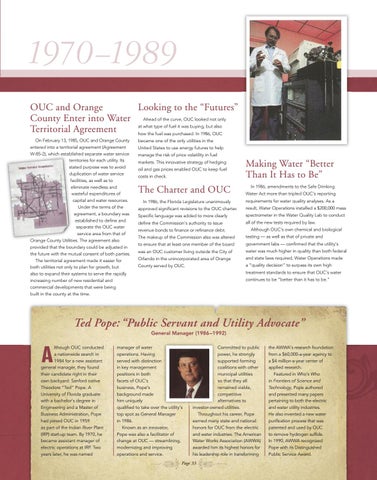 Advancements in Technology from the Meter to the Desktop

OUC and Orange Looking to the “Futures” County Enter into Water Ahead of the curve, OUC looked not only at what type of fuel it was buying, but also Territorial Agreement how the fuel was purchased. In 1986, OUC Hand-held mini-computers used by meter readers were placed in a console where data was downloaded to PCs and then into the mainframe for billing.

during the late ‘80s as it initiated measures to

Accounting and sped up the estimating

keep up with advancements in technology and

the economy while staying ahead of growth.

The impact of PCs became even more

computers (PCs) at OUC grew from eight to

4381 IBM mainframe computer was installed and

connected to the LANs. Data communications

to link groups of PC users, giving them easier

capabilities emanating from the mainframe

were also expanded to outlying facilities via

Purchasing and Materials Management was

the progress toward an integrated office

able to convert from a manual system to a

information system. As a result of the rapid

deployment of computers, the Micro-

needed to prepare drawings of complex

and the flow of information.

On February 13, 1985, OUC and Orange County entered into a territorial agreement (Agreement W-85-2), which established separate water service territories for each utility. Its stated purpose was to avoid duplication of water service facilities, as well as to eliminate needless and wasteful expenditures of capital and water resources. Under the terms of the agreement, a boundary was established to define and separate the OUC water service area from that of Orange County Utilities. The agreement also provided that the boundary could be adjusted in the future with the mutual consent of both parties. The territorial agreement made it easier for both utilities not only to plan for growth, but also to expand their systems to serve the rapidly increasing number of new residential and commercial developments that were being built in the county at the time.

became one of the only utilities in the United States to use energy futures to help manage the risk of price volatility in fuel markets. This innovative strategy of hedging oil and gas prices enabled OUC to keep fuel costs in check.

The Charter and OUC In 1986, the Florida Legislature unanimously

Making Water “Better Than It Has to Be” In 1986, amendments to the Safe Drinking Water Act more than tripled OUC’s reporting requirements for water quality analyses. As a

spectrometer in the Water Quality Lab to conduct

define the Commission’s authority to issue

all of the new tests required by law.

Although OUC’s own chemical and biological

The makeup of the Commission also was altered

testing — as well as that of private and

to ensure that at least one member of the board

government labs — confirmed that the utility’s

was an OUC customer living outside the City of

water was much higher in quality than both federal

Orlando in the unincorporated area of Orange

a “quality decision” to surpass its own high treatment standards to ensure that OUC’s water continues to be “better than it has to be.”

General Manager (1986–1992) lthough OUC conducted a nationwide search in 1984 for a new assistant general manager, they found their candidate right in their own backyard: Sanford native Theodore “Ted” Pope. A University of Florida graduate with a bachelor’s degree in Engineering and a Master of Business Administration, Pope had joined OUC in 1959 as part of the Indian River Plant (IRP) start-up team. By 1970, he became assistant manager of electric operations at IRP. Two years later, he was named

A For OUC, 1987 kicked off an information era with the deployment of personal computers on desktops. Two years later, the Micro-Computer Support Department was formed to help employees manage their information technology needs. Page 32

manager of water operations. Having served with distinction in key management positions in both facets of OUC’s business, Pope’s background made him uniquely qualified to take over the utility’s top spot as General Manager in 1986. Known as an innovator, Pope was also a facilitator of change at OUC — streamlining, modernizing and improving operations and service.

Committed to public power, he strongly supported forming coalitions with other municipal utilities so that they all remained viable, competitive alternatives to investor-owned utilities. Throughout his career, Pope earned many state and national honors for OUC from the electric and water industries. The American Water Works Association (AWWA) awarded him its highest honors for his leadership role in transforming

the AWWA’s research foundation from a $60,000-a-year agency to a $4 million-a-year center of applied research. Featured in Who’s Who in Frontiers of Science and Technology, Pope authored and presented many papers pertaining to both the electric and water utility industries. He also invented a new water purification process that was patented and used by OUC to remove hydrogen sulfide. In 1990, AWWA recognized Pope with its Distinguished Public Service Award.