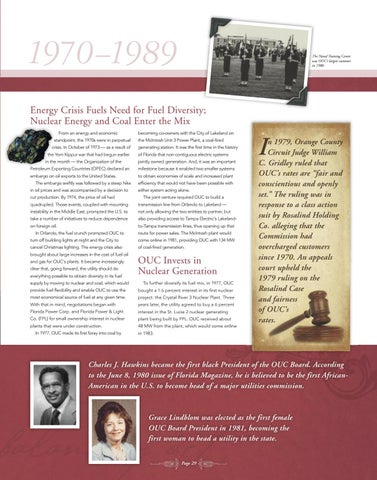 The Naval Training Center was OUC’s largest customer in 1980.

Energy Crisis Fuels Need for Fuel Diversity; Nuclear Energy and Coal Enter the Mix From an energy and economic standpoint, the 1970s were in perpetual crisis. In October of 1973 — as a result of the Yom Kippur war that had begun earlier in the month — the Organization of the

jointly owned generation. And, it was an important to obtain economies of scale and increased plant efficiency that would not have been possible with either system acting alone. The joint venture required OUC to build a

quadrupled. Those events, coupled with mounting

transmission line from Orlando to Lakeland —

instability in the Middle East, prompted the U.S. to

not only allowing the two entities to partner, but

take a number of initiatives to reduce dependence

In Orlando, the fuel crunch prompted OUC to

route for power sales. The McIntosh plant would

turn off building lights at night and the City to

brought about large increases in the cost of fuel oil and gas for OUC’s plants. It became increasingly clear that, going forward, the utility should do everything possible to obtain diversity in its fuel supply by moving to nuclear and coal, which would

OUC Invests in Nuclear Generation To further diversify its fuel mix, in 1977, OUC

provide fuel flexibility and enable OUC to use the

bought a 1.6 percent interest in its first nuclear

most economical source of fuel at any given time.

With that in mind, negotiations began with

years later, the utility agreed to buy a 6 percent

plant being built by FPL. OUC received about

plants that were under construction.

48 MW from the plant, which would come online

of Florida that non-contiguous electric systems

embargo on oil exports to the United States.

capital needs and study the impact of major system expansion on rates. The utility also began to enlist financial experts to assist the organization in obtaining the lowest possible interest rates on new bond issues and refinancing older bonds.

generating station. It was the first time in the history

in oil prices and was accompanied by a decision to

With the help of an accounting firm, an electric and water rate-making system was established that allowed OUC to strike a balance between financing growth and providing affordable rates. As an outgrowth of these activities, OUC began using corporate financial modeling to forecast long-range

As the demand for new water and electric production increased, so did the need for funds to finance these projects. In the early ‘70s, OUC began to evaluate its financial operations from cash flow management and rate making to how it financed investments in infrastructure.

becoming co-owners with the City of Lakeland on

n 1979, Orange County Circuit Judge William C. Gridley ruled that OUC’s rates are “fair and conscientious and openly set.” The ruling was in response to a class action suit by Rosalind Holding Co. alleging that the Commission had overcharged customers since 1970. An appeals court upheld the 1979 ruling on the Rosalind Case and fairness of OUC’s rates.

Charles J. Hawkins became the first black President of the OUC Board. According to the June 8, 1980 issue of Florida Magazine, he is believed to be the first AfricanAmerican in the U.S. to become head of a major utilities commission.

Grace Lindblom was elected as the first female OUC Board President in 1981, becoming the first woman to head a utility in the state. Page 29