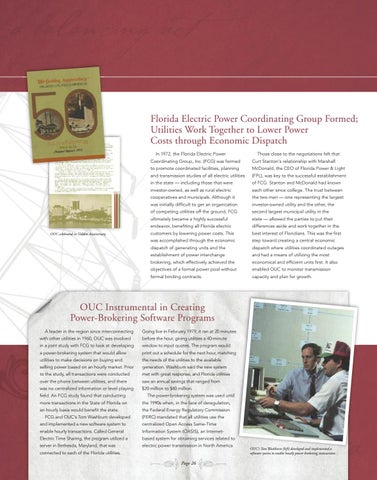 Those close to the negotiations felt that

and transmission studies of all electric utilities

(FPL), was key to the successful establishment

in the state — including those that were

of FCG. Stanton and McDonald had known

investor-owned, as well as rural electric

each other since college. The trust between

cooperatives and municipals. Although it

the two men — one representing the largest

was initially difficult to get an organization

investor-owned utility and the other, the

of competing utilities off the ground, FCG

second largest municipal utility in the

state — allowed the parties to put their

differences aside and work together in the

customers by lowering power costs. This

best interest of Floridians. This was the first

was accomplished through the economic

step toward creating a central economic

dispatch of generating units and the

and had a means of utilizing the most

brokering, which effectively achieved the

objectives of a formal power pool without

capacity and plan for growth.

with other utilities in 1960, OUC was involved

before the hour, giving utilities a 40-minute

in a joint study with FCG to look at developing

window to input quotes. The program would

a power-brokering system that would allow

print out a schedule for the next hour, matching

utilities to make decisions on buying and

the needs of the utilities to the available

selling power based on an hourly market. Prior

to the study, all transactions were conducted

over the phone between utilities, and there

saw an annual savings that ranged from

was no centralized information or level playing

field. An FCG study found that conducting more transactions in the State of Florida on

the 1990s when, in the face of deregulation, the Federal Energy Regulatory Commission

and implemented a new software system to

The power-brokering system was used until

an hourly basis would benefit the state. FCG and OUC&#39;s Tom Washburn developed

At OUC’s Lake Highland Water Treatment Plant, an operator could control water supply for more than 200,000 people in the Greater Orlando area from one console.

based system for obtaining services related to

server in Bethesda, Maryland, that was

connected to each of the Florida utilities.

In 1974, a new computer-based control center was placed into operation at the Lake Highland Plant. Using the latest computer technology, OUC continued to monitor and control all water plants from this one centralized location. Featuring a console with monitors, the new center enabled a single operator to view the operational status of all OUC plants

and elevated tanks, as well as switches to turn pumps and equipment on and off. New software facilitated monitoring and control functionality, and collected and stored historical data that could be used to prepare reports and analyze the operation of the system. The control center was staffed with an operator 24 hours a day, seven days a week. Page 27