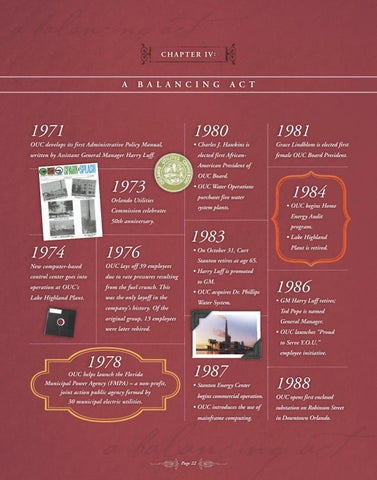 due to rate pressures resulting

from the fuel crunch. This

was the only layoff in the

1980s marked a period of both turbulence and growth for

Orlando became the No. 1 destination for relocation in Florida, and the

the energy and water industries. It was a perfect storm for brewing

utility grew its customer base by a record 41 percent. In that same time

sweeping environmental regulation, including the establishment of

infrastructure was added to meet customers’ needs. Thanks to the opening of Walt Disney World® in 1971, Central Florida

International Airport grew to one of the busiest in the world. With

to move data and communicate. As a result, this time period would see major developments in information technology as the world moved

from mainframes to desktop computers.

In the midst of such transformative change, OUC faced a balancing

and the need for fuel diversity, the utility added a series of new

significantly increased its water operation through acquisition of the

Dr. Phillips Utilities, which served customers in southwest Orange County near the soon-to-be tourism corridor. OUC — like the region

it served — was laying a foundation for the future. At the same time,

For OUC, this era marked a period of historic expansion that would

company’s history. Of the

being the first to receive an “AAA” rating on its bonds from a major rating agency in 1989.

to a more competitive business climate, the 1970s and

Pictured left: In 1971, Walt Disney World® opened and Central Florida became home to the largest theme park in the world with hundreds of thousands of visitors each year. Although Disney World was not inside OUC’s service territory, the park acted as a catalyst for growth throughout the region. From hotels and restaurants to accommodate tourists to homes for Disney employees, the demand for OUC power and water grew rapidly as a result of the park’s opening.